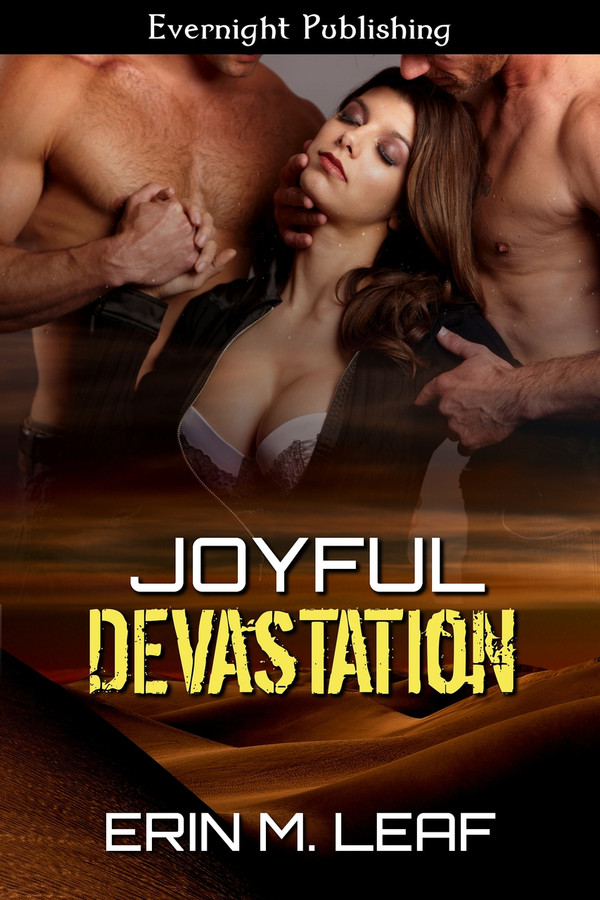 No one expects an alien invasion, least of all Dr. Bea Morgan, and especially not on the day she meets the man of her dreams. Wait, no, the men of her dreams. Two sexy officers in her ER is surprising, but when they steal a kiss from her on a broken elevator, everything changes.

Gideon Cearvall has been dreaming of a faraway desert tower his entire life, but he’s learned to put aside childhood fantasies. He’s a good cop with a great partner who considers him family. So what if he’s in love with his best friend? Theo will never know.

Theo Gray adores his family and his partner. He’s perfectly happy—until he meets the curvy doctor who rocks his world. When a kiss turns into a fight for survival, he struggles with his desire for both Gideon and Bea.

When aliens devastate your world, love is all that will keep you alive.

Just when she was afraid she was going to lose it, Theo leaned close enough that she felt his breath on her ear.

“Bea, this is going to sound crazy, but I’d really like to kiss you,” he murmured.

She stopped breathing as Gideon went totally still on her right side. “Um, what?” she asked stupidly, trying to buy some time to think. The moment he’d said the word “kiss” her entire body went rigid. She remembered his warm brown eyes and full lips—and don’t forget his lovely cock, her brain supplied helpfully—and couldn’t figure out what to say.

“I wanted to ask you to dinner in the hospital, but I chickened out,” Theo murmured, not moving away.

Gideon tried to let go of her hand, obviously hearing what his friend was saying, but Bea tightened her fingers. God help her, but she wanted them both. In the silent darkness, that actually seemed like a viable option.

She shivered, then nodded. She had to clear her throat before she could get her voice to work. “Okay,” she said, then grabbed hold of her courage. “But I want a kiss from Gideon, too.”

Gideon sucked in a sharp breath. “What?”

“You heard me,” Bea said, feeling Theo smile against her cheek. “I don’t think Theo minds sharing.” In the dark, it was like another person had taken over her voice. Suddenly, she could talk about what she really wanted. She didn’t want to choose between them. And it’s just a kiss, she told herself. No big deal.

“I don’t mind,” Theo muttered, moving closer and pressing his body into hers.

Bea caught her lower lip between her teeth. Was this really happening? She felt bold and sexy, totally unlike her usual self. Theo slotted up against her and she abruptly felt the hot length of his cock on her hip. His injury wasn’t slowing him down at all, not that she’d expected it to. Any man who could maintain an erection in the emergency room while someone sewed up his thigh was certainly virile. He was also large and strong. Bea melted into him as Gideon moved closer. The long line of his body pushed into her right side so that they surrounded her. She liked the way it felt. A lot. She didn’t feel trapped. She didn’t feel nervous. Instead, she felt more aroused than she’d been in years. Or ever.

“You smell so sweet,” Theo said, nosing along her cheek.

“No, you smell like gorgeous,” Gideon said, kissing under her right ear.

The double whammy of the two men moving in at the same time had her trembling. “God,” she said, voice thick.

“Not God,” Theo said arrogantly as he moved in. “Just me.” And then his mouth was on hers.

Bea gasped. He kissed her the way a drowning man craves air, the way a runner pushes to the finish line: all-out, nothing held back. He devoured her mouth, hands in her hair holding her steady. Gideon kept her upright, an arm going around her waist. She didn’t know if the two men had done this before, but she thought not. She sensed Gideon straining to see, but the darkness cloaked them all in a sort of hushed arousal.

When Theo finally let her up to breathe, Gideon moved in, kissing her lightly at first, and then deeper, slow and teasing. She held onto his hand, picturing his electric blue eyes as his lips moved on hers.

“Fuck,” Theo said, pushing his erection into her. “I can hear you kissing each other.”

Gideon shuddered into her mouth and she grabbed his shoulder with one arm and wound the other around Theo, bringing him in again. She kissed Gideon wildly and then switched to Theo. When she moved back to Gideon, he groaned and she realized that he was hard, too. His cock lay against her right hip. When she kissed him, Theo hadn’t quite moved away yet and suddenly, they were in a three-way kiss that felt hotter than an inferno. When they finally broke apart, Bea couldn’t catch her breath.

“Jesus.” Gideon dropped his head into her neck. “If we weren’t trapped in here—” He broke off, hips rolling in unmistakable intent.

“Yeah,” Theo agreed, hands around his friend as well as Bea.

The aliens are coming in this thrilling and erotic sci-fi novella. Dr. Bea Morgan meets the men of her dreams in a broken elevator and escape right into an alien invasion. This fast-paced and smooth-flowing plot keeps the readers on their toes with action, suspense, drama and romance. The author brings chills to the reader&#039;s spine with well-written scenes and details that spark the imagination and the strong compelling characters are easily related to and grab the reader&#039;s attention from the very beginning. Tensions build throughout the story and Bea, Theo and Gideon try to survive the invasion and learn some secrets that change everything. The attraction between Bea and the two men is off the charts hot and the sex scenes are smoking hot, including M/F/M, M/M/F and M/M sex scenes. The relationship progresses quickly due to some unexpected outside influence that puts a new spin on things for the threesome as well causing some tension. Gideon learns some things about his dreams that frankly surprise them all and Theo learns some things about himself that surprise him. The author has created an alien invasion story that gives the readers thrills and chills as well lots of passion in a fantastic quick read with some surprises and betrayals that the reader doesn&#039;t see coming, which adds more drama and excitement. The non-stop action ensures that once started, the reader won&#039;t want to put the book down, which is certainly the case for me. This is the first book that I have read by the author and I have added Erin M Leaf to my TBR list.

I really enjoyed this book, in part because I wasn&#039;t quite expecting to. There&#039;s the usual bug-men attack, Earth&#039;s defenses being almost completely useless against alien tech and post-apoc world with an unreliable military thing going on. However, there were enough plot twists to keep everything fresh and interesting. The identity of the entity behind everything was a little surprising and the reason for it was definitely something I didn&#039;t expect. It seemed like a lot of overkill, but it worked. I also really liked the interaction between Bea, Gideon and Theo. The banter was great and I also admired them for their calm certainty in the face of danger and how they held onto their humanity despite everything going down. The relationship and the bond was slightly problematic insofar that it was never really adequately explained. Perhaps, all things considered, it couldn&#039;t have been. I was also a bit nonplussed about Gideon&#039;s true identity and the completely inexplicable waste of the aliens. I simply don&#039;t believe that if there was an alien race going around voraciously consuming other lifeforms, that they wouldn&#039;t keep a sort of farm going. It&#039;s really not like the universe is simply abounding with lifeforms that are edible. Despite all that, most questions were adequately answered and it was a fairly sweet love story. I&#039;d definitely pick up more books by this author in the future.

This is a really good book! There were some smoking hot sex scenes and the plot kept me intrigued! If you are looking for something out of the ordinary this is the book for you!