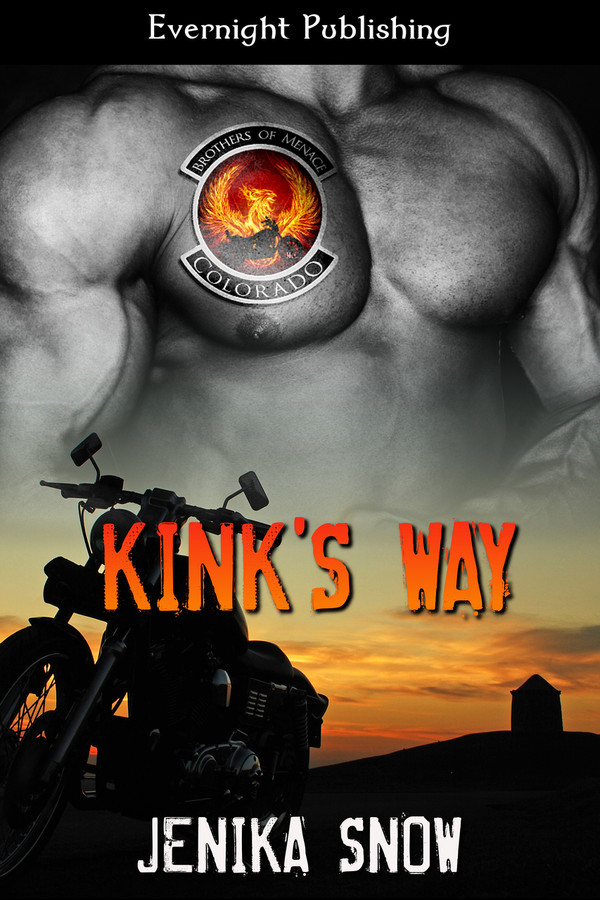 The Brothers of Menace MC, 2

Being the VP of The Brothers of Menace means Kink has to make tough calls, and be hard as nails. But giving himself the rule of not doing relationships means for a lonely life, especially when he wants a woman that is just as damaged as he is.

Cookie has risen above the nastiness that life has thrown her way. But then she sees Kink, a man that is rough and dangerous, and she wants him more than she has ever wanted a man.

But just when Cookie and Kink start to give in to each other, drama unfolds with the MC, and with Kink's personal life. He is at risk of losing his daughter, and the ones responsible for bombing The Brothers territory strike on a personal level. Soon violence is erupting, lives are on the brink, and all Kink can think about is being with Cookie.

She pressed her lips to his, and for a moment he was so damn tense and hard beneath her mouth. Maybe he was scared himself, or surprised by her boldness? Either way she was not going to stop until he told her to. Then she would let the reality of all of this settle in. Right now it felt good to have him pressed close to her, to feel his hardness against her softness. She wasn’t short by any means, but even at five-foot-six Kink towered over her, and made her feel more feminine and fragile than she had ever felt.

He pulled back, breathed out heavily, but was still close enough that if she just leaned in that inch she could kiss him again. But he didn’t bring his mouth back to hers, and instead speared his hand in her hair, pulled her head back so her neck was arched, and placed his lips hard on her neck. For several long seconds all he did was lick and nip at her throat. He ran his tongue up her flesh, circled it around her ear, and growled out roughly. “You smell so good, taste so fucking good.” He went back to running his teeth up and down her neck, and then pressed the lower half of his body against her belly. He was hard for her, rock hard in fact, and he started grinding himself against her. “You see what you do to me? You see how hard I am, and all it took was this one kiss to make me nearly coming in my fucking jeans.”

A small gasp left her, but she didn’t push him away, and instead gripped his hair tighter, and pulled him in closer.

“But you’ve made me this hard before, Cookie. You’ve made me like damn steel, and all I had to do was look at you.”

Another shiver worked its way through her body, and she grew wetter. God, she was so wet.

She was breathing heavier, not sure how to respond, but knowing she wanted to tell him all the things she desired him to do to her.

“All you have to do is tell me where you want me to touch you, Cookie,” he said low, heavy, and his warm breath teased her hair.

She didn’t say anything, just lifted her hand, took hold of his that was beside her head, and lowered it to her breast. “Here,” she said softly, and when he pulled back to look in her eyes, she pushed his hand even lower still. “And here,” she said when he was now pressing between her thighs.

“Damn, baby, I can feel how wet you are for me.” He pressed his hand a little harder against her.

She rested her head back on the fridge and forced herself to keep her eyes open. The way he rubbed his fingers against her had all the muscles inside of her contracting and releasing. “This is so…” She didn’t know how to finish that sentence. It felt right, so right in fact, but it also felt rushed, unusual. The sensations moving through her were like nothing she’d ever experienced before. They frightened her, excited her, and made her want to latch onto them and not let go. But she also had to be realistic. A man like Kink, one that she knew got around in the club with the willing women, certainly wouldn’t want her for more than a few hours.

Kink is the vice president of The Brothers of Menace. He fits the role of tough as nails and able to make tough calls when needed. However his heart seems to be off limits. That is until he comes across Cookie. Cookie has had a rough life but she still wants Kink. Kink’s personal life becomes filled with drama as well as issues with The Brother’s territory. Kink’s Way is the second book in The Brothers of Menace MC series by Jenika Snow. While this book is part of a series, this book can be read and enjoyed as a standalone book. The beginning of the story leaves you wanting to know more. By the end of the first chapter, I could not wait to finish the book. The world the author created draws the reader into it. She did a great job of making it very realistic and believable. The pace of the story was a little slow in the middle but the rest of the story was set at a good pace. The main characters and the secondary characters were fascinating and realistic. I liked how each of the main characters were not perfect and had flaws. It made both Kink and Cookie more authentic. The point of view alternated between Kink and Cookie, giving the reader a glimpse inside both characters. The changing point of view was done in a way so the reader did not get lost in the story or to repeat story lines. The main issue of the story was Kink rising above his past and falling in love with the woman of his dreams. Kink’s issues were based more in trust. He came across as a man who had trouble trusting anyone to far into his heart. The dialogue between the characters was sincere and unique. The characters voice matched not only the setting but fit their overall personality. The ending was a bit predictable but the author takes the reader on a wonderful journey. I hope we get to see these characters again in the future.

What can I say, Jenika Snow has done it again. The second book in this series is awesome. I can&#039;t wait for Lucien&#039;s story. I just love the Brothers of Menace series. I am happy that she is continuing with this series. For all of his rough edges, it shows how deeply Kink loves Cookie and his daughter Callie. Again another true alpha taking care of what is his. Happy Readings!!!

Once again author, Jenika Snow, has done a wonderful job on this book. Like every book in every series of hers this book has the action, the romance, and everything in between. It will leave you wanting more and feeling every emotion for every character. Can&#039;t wait for more.

This is the book 2 in this series, it just keeps getting better! Be ready for bikers, grit, blood, suspense, killing and lots of sex, I couldn&#039;t put it down with all the excitement. These characters are complex, protective, possessive, vengeful, but loving deep down.

Whew! Another hot MC romance by one of my favorite authors! I read this in one sitting, couldn&#039;t put it down. Jenika Snow got me hooked on MC books in the first place and I loved her Grizzly MC series. Her plots are always filled with action packed suspense, and great characters. Love how each raw and gritty biker gets his own story and the sex is heart throbbing hot! My glasses actually steamed up! I&#039;m also looking forward to Lucien and Callie&#039;s book. Would have given this a five but took one away for editing issues.

I&#039;ve really gotten hooked on Jenika Snow&#039;s MC books. I got started with the Grizzly MC series, and the addiction has continued with the Brothers of Menace series. Can&#039;t wait for the next book already!

Cookie may only be twenty-one but she&#039;s lived through more s*** in her twenty-one years than most people see in a lifetime and at the moment she&#039;s safe working bar for The Brothers of Menace and considering what&#039;s she&#039;s been through you&#039;d think the last thing she&#039;d want is the tough, rough hard as nails VP known as Kink but she can&#039;t help it she has trouble keeping her eyes off him. Kink it would appear feels the same way and even with all the s*** he has going on in his life at the moment he can only fight this attraction for so long. As you&#039;d expect from Jenika this book is hot but it has so much else going on, Kink is having issues with his ex and the fanatical religious cult The a Church of the a Good and Holy is back and causing more problems and we finally get a glimpse, well more than a glimpse really but we discover Luciens love interest, I can&#039;t wait for his book I&#039;ve been waiting for Lucien&#039;s since he first made his appearance in the Grizzly MC books.