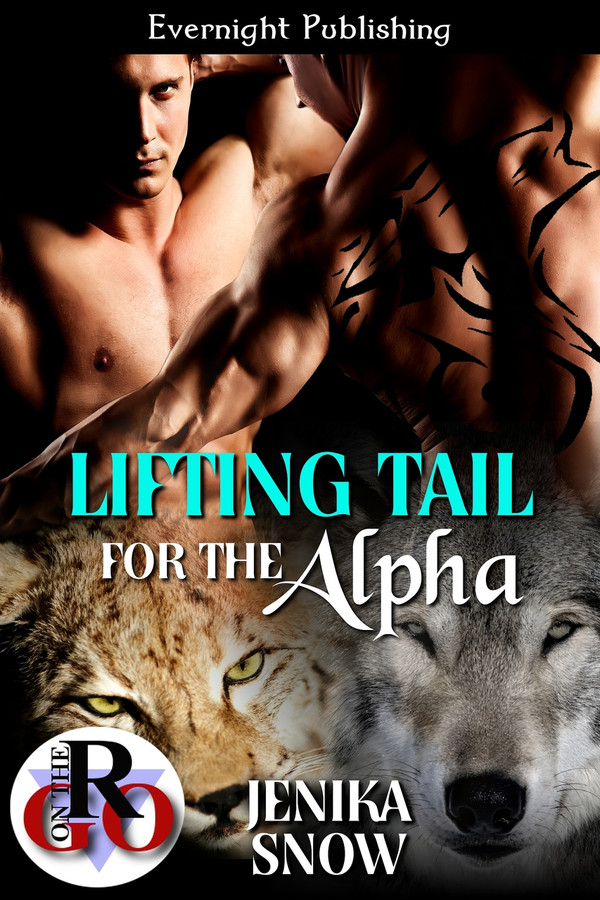 Being a bobcat shifter in a pack full of wolves, and gay on top of that, made Xavier feel as though he doesn't belong. To make matters worse he wants the future alpha of the pack, Arsen. But Arsen is arranged to marry a female wolf. Xav didn't think Arsen was gay, but that all changes when they find each other alone, and realize they are mates.

Arsen is next in line to lead his pack, and is supposed to be mated to a female, but only desires Xav, the bobcat shifter that keeps to himself. One night at a party feral cravings ignite in both of them. Arsen realizes Xavier is his, and will not let anyone or anything stand in his way of claiming him. But not everyone is happy with the future alpha being mated to a bobcat, or a male at that.

“You have no idea how many times I thought about spreading your ass and licking your hole.” The air left Xav in a whoosh, and he closed his eyes at the first feel of Arsen sliding his mouth back and forth along his lower back.

“Ugh.” Xav strained and tensed when Arsen grabbed his balls in one large hand and rolled them in his palm. After several agony and ecstasy filled seconds of Arsen toying with him, his mate let go of his balls and gripped his shaft. Up and down he stroked the length, making him harder and slicker at the tip. He ran the pad of his thumb over the slit at the crown of his dick, spread his pre-cum around until Xav was grunting in pleasure, and then moved his face down lower so his warm breath was now right on his nuts. A strangled groan left him when the wolf lapped at the weights, sucked them into his mouth, and then let them go with a resounding pop. Xav’s bobcat was right at the surface, purring and clawing, hissing and rubbing up against his skin in hopes of coming out. He wanted to take the wolf and show him that he was also an alpha, but Xav liked what was happening too much, and relinquishing power felt fucking exquisite.

“Christ, your fucking skin is salty and sweet.” Arsen covered Xav’s back with his chest and whispered harshly in his ear, “And I am so damn hard I could drive nails through steel right now.”

“Just do it already.” Xav looked over his shoulder, pressed his ass into Arsen’s cock, and bared his teeth at his mate. “Fuck me, wolf.” Arsen grabbed the back of his neck, and curled his fingers into his flesh until a sting of pain lanced through Xav. He leaned in close so they were nose-to-nose and bared his own teeth. Arsen was already losing control, and that was evident by the canines that he flashed Xav’s way.

“Watch it, mate. I’m barely holding on as it is.” He lapped at the seam of Xav’s lips.

“I’m also barely fucking holding on. So if you’re going to fuck me, then do it.” Arsen gave a low growl in response, tightened his fingers into his nape, but finally leaned back.

“I’ll fuck you when I’m good and ready to. Right now what I want to do requires my mouth and not my fucking cock.

The characters do not have a lot of space to develop, and even though the author tried to show how Xav was submissive to Arsen somewhat, I really did not see it. For a quick, sexy paranormal read, this does fit the bill. However, do not expect to walk away from the read dying to know more about them or hoping for a longer story. There just is not enough there to be invested in.

Xavier is a bobcat in a wolf pack. If that does not make him an outsider, then being gay on top of that does. Even though he grew up with the pack, he still has feelings of not belonging. Additionally, he is attracted to the future Alpha of the pack, Arsen, who Xavier is sure is straight as they get. Arsen has a lot on his plate, and on the top of his list of problems is being mated to a female he does not particularly like. The one thing he has not told anyone is he is attracted to a certain bobcat shifter who does not come anywhere near him, always keeping to himself. However, Arsen comes across as a hot and sexy man who will do whatever he needs to in order to have what he wants. The chemistry between Arsen and Xavier is blistering. The sex scenes are scorching. Arsen is bound and determined to make sure everything between him and Xavier is good and, to get the pack to recognize that they are mates. I found this story to be well-written with engaging and interesting characters. At 33 pages, this story draws you in and does not let you go. It also does not have the shorty story feel because it has a clearly defined beginning, middle and end. Overall, this was one HOT book. It will keep you warm on a cold winter night.

Never feeling like he belongs, Xavier has felt alone and alienated within his pack. After all, he is a bobcat shifter in a pack of wolves and to further complicated matters he is a gay, bobcat shifter and he has a severe case of lust for the future alpha of the pack, Arsen. But Arsen is an arrangement to marry a female wolf shifter and he isn’t gay. But when Xavier and Arsen find themselves alone at a party, the cravings and desire between them can’t be denied. It doesn’t take each man long to realize that they are destined mates and Arsen isn’t about to let anything or anybody get in the way of claiming his mate for a lifetime. With raw emotion, temptation and undeniably sexy characters, author Jenika Snow hits all the right notes to create a strong, sensually-charged struggle, intense emotions and chilling tension with plenty of smoking-hot action between two alpha shifters to set the pages on fire. Even with the quick and short format in Lifting Tail for the Alpha, the author skillfully demonstrates her ability to build the story with enough imagery and drama to grab the reader’s attention and give them a story that touches their heart and reaches within to make them really care about the characters and their relationship. I almost felt like I was holding my breath and with each page I read I found myself falling deeper and deeper into the story. Arsen is a true alpha in his actions and demeanor, he knows that one day he will rule his pack and he displays quite easily that he isn’t about to take crap from anyone nor is he willing to give up what is his. And if Arsen is an alpha, that sure doesn’t make Xavier his submissive since in his own right Xavier is an alpha as well but together they are both strong enough that they will let their desire and needs free to enjoy their bond. Readers will savor and thrill to read about Xavier and Arsen’s evening of seductive desires and mate claiming and will have them wishing the story would never end.