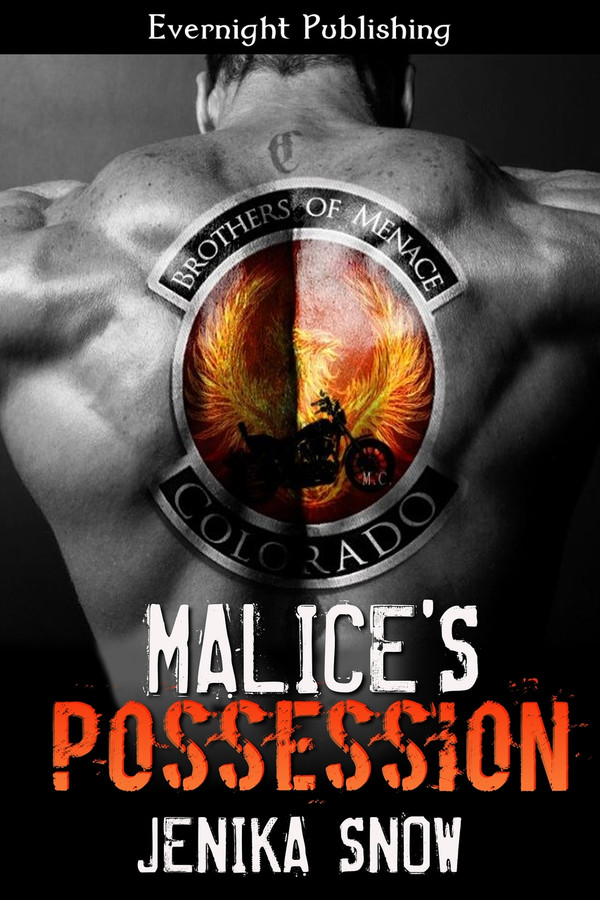 The Brothers of Menace MC, 1

Trevor “Malice” Mason once had an old lady, and he doesn’t need another one. Taking care of his son and being there for The Brothers of Menace MC are what is important to him. The only kind of female company he needs is the one that can warm his bed at night.

Adrianna Carmine has led a tough life, but she is a survivor. When she allows herself to fall for the saccharine falseness of comfort from her now ex-boyfriend, her only escape is to either die trying, or kill the man that exacts pleasure from hurting her.

When Malice finds Adrianna wounded and alone, protecting her consumes him. After delivering retribution to the one that hurt her he takes her back to River Run, hoping that she can heal. But Malice wants her something fierce and staying away isn’t an option, even if she deserves better.

“I want to taste you.” He moved his hand over her breasts, curled his fingers around the mound until she groaned out, and then continued to trail it down her belly. He stopped when he was right above her pussy, and her inner muscles clenched at the knowledge he was so close to what she wanted him to touch the most.

“I want you to taste me, Malice.” She hadn’t meant to say that out loud, but as soon as the words left her he groaned and placed his open palm right between her legs. The pants she wore were nothing but thin, stretchy cotton, and she could feel the heat from his body sear right to the center of hers.

“Say it again.” He murmured against her neck, and went back to running his tongue up and down the length of her throat and nipping her flesh along the way. “Tell me you want my mouth on your pussy, how you want me pulling your lips apart and sucking your clit into my mouth.”

Adrianna couldn’t hold her head up any longer and let it fall back against the wall. Closing her eyes and not able to stop the moan that left her, she opened her mouth to obey him. God, she wanted to say just that, but her clit started throbbing from the increased blood flow, and her nipples ached painfully as they hardened even further. “I…” She swallowed when he applied even more pressure to her pussy and pressed the base of his palm right against her clit. “Oh.” The one word came from her on an exhale.

“That’s all right, baby.” He kissed his way down her throat, over her collarbone, and then dragged his tongue over the raised bone. “I know you want it, can feel how wet you are through your pants, and don’t blame you for not being able to speak.” His breath was hot, humid, and when he spoke it was more akin to panting. “I can barely speak myself.” He didn’t move for a moment and just breathed in and out. “I love your body, love your curves and that you’re built like a woman.” He groaned and squeezed his hands on her flesh. “I love that you are built to take me into your body and not break.”

God, he was saying all the right things to make her so very plaint to him. He took her hand that was on his bicep, and moved it between their bodies and right over his dick. She swore the damn thing jumped beneath her palm, and a fresh gush of moisture left her.

“You feel how hard you make me?” He emphasized his point by pressing himself more firmly against her hand. “I don’t think I’ve ever been this hard in my life.”

“Look at me, Adrianna.” He spoke with this harsh, guttural tone, and Adrianna couldn’t help but obey.

She opened her eyes and looked down, and when she watched him take the edge of her pants between his fingers and started to pull them down, the air got trapped in her lungs. “This is so fast.”

He stopped instantly, but still held her pants and held his gaze with his own. “If you want me to stop I will, baby. You are controlling this situation, and you hold all the power.”

Hearing a man as strong as Malice say she was in control had a wave of strength moving through her. It was very empowering to know that she had this large and dangerous man in the palm of her hands. This was not like any situation she had ever experienced, and the things she felt were completely foreign to her. But what she knew without a doubt was that she wasn’t going to stop this. Placing both of her hands over his, she started to push her pants down. Malice flared his nostrils, and then looked down when the material fell past her knees and her panties were the only thing covering her from him. The only thing she could hear was their combined rapid breathing, and then Malice was pulling her panties down and the chilled air was touching her exposed flesh.

Malice is over relationships after a bad one left him raising his son. He did not look for a woman more than a night of fun. However after meeting Adrianna, everything changes. Malice wants to protect Adrianna at all costs. Malice’s Possession is the first book in The Brothers of Menace MC series by Jenika Snow. The beginning of the story unfolds in a way leaves you wanting to know more. By the end of the first chapter, I was excited to finish the book. The author did an excellent job of drawing the reader in to her world. She also did a great job of making that world very realistic. The pace of the story was very good. It was not too slow or too fast. The main characters and the secondary characters were electrifying and lifelike. I enjoyed the fact that both Malice and Adrianna were not perfect and had faults. This made them believable. The point of view alternated between Malice and Adrianna, giving the reader a glimpse inside both characters. The changing point of view was done with care so the reader did not get lost or repeat story lines. The main issue of the story was Malice and Adrianna and their relationship. All relationships are tricky, and nothing better reflected this than Malice and Adrianna falling in love. The dialogue between the characters was genuine and distinctive. The characters voice matched not only the setting but fit their overall personality. The ending was a bit predictable but this book was more about the journey to the end that the end itself. I hope we get to see these characters again in the future.

OMG! This book is so freaking good. Well written, hot and steamy with some biker drama. After reading Owned by the Outlaw (Stinger and Maggie&#039;s story) where we were first introduced to Malice, I was all set to not like him, thinking he came across as a macho and arrogant biker. But dang the man has redeemed himself. Malice is a raw and gritty badass biker but shows a sweet nature when he saves and protects Adrianna, claiming her for his own. Loved Malice and Adrianna&#039;s story. Would definitely recommend. Can&#039;t wait for more in this series. Another great book by Jenika Snow.

Omg this was fan-freaking-tastic!!!! Loved Malice, and I can not wait to read more!!!! Way to kick off book 1 FANTASTIC♥

Another good, charming and intriguing book by Jenika. Adrianna at the start in my opinion was a little weak but probably that&#039;s understandable because of the last few months she lived was like hell. And after all through the book she grow up stronger. I liked that she didn&#039;t judged Malice or other&#039;s brother&#039;s in club for theirs chosen life. And Malice was just wonderful. Rough, hardcore alpha biker but so sweet and understanding toward&#039;s Adrianna. You just can&#039;t help but fall for him. Hard. But The Brothers of Menace have some troube coming towards them. A crazy cult, calling themself The Church of the Good and Only. The idiot things they sprouted some nonsense about the club and woman who working for them. I just got a feeling it&#039;s just a start and have though that they just should be all exploded. It&#039;s was kinda weird when something really exploded in the end of the book. It was just really bad that my mind read not the right party. Can&#039;t wait for next book to find out how club going to take care of idiot&#039;s in that cult. And show that no one messing with them or those who are under their protection.

Once again Jenika you have blown me away. Not only was this story fan-fucking-tastic it was gritty, dramatic, sexy, and so very intoxicating. We met Malice and the Brothers in the Grizzly MC&#039;s book and knew that under that big, bad, alpha exterior is a man who only wants to protect what is his, and it’s beautiful to catch him in those rare moments of vulnerability. From the first meeting between him and Adrianna you know that this sweet girl is going to turn his world upside down. Adrianna has been dealt a helluva hand in what we call life but after meeting Malice she slowly but surely starts to become the person she&#039;s meant to be. When it comes down to it, this story was all heart and erotic as hell, I am so ready for the next one. Which Brother will it be.....