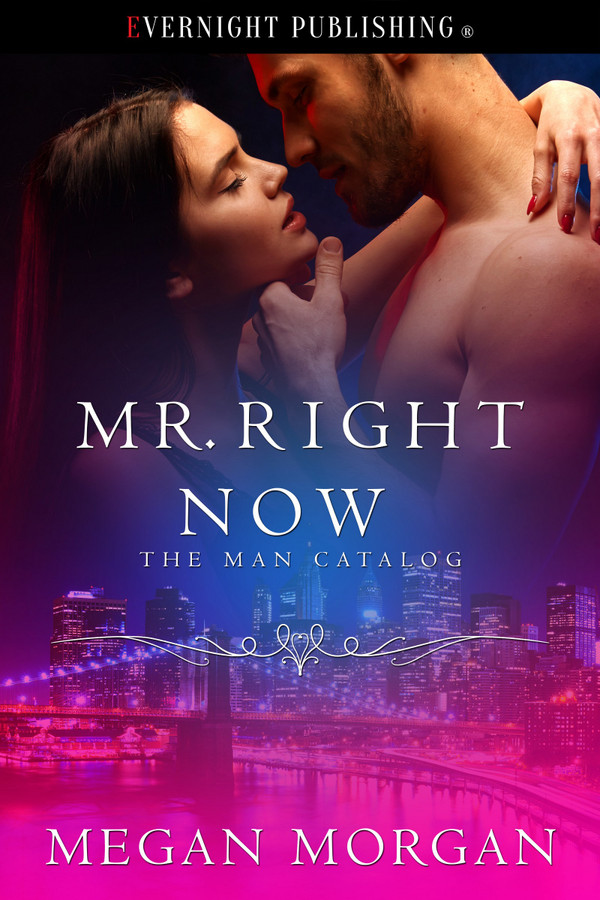 Nikki Baranski would rather be running her own vintage clothing boutique instead of working in her grandmother’s thrift store, she’d also rather be more confident than hesitant, and she’d rather put her ex-boyfriend in the past. Unfortunately, she has to hear him on the radio every day. And when her self-absorbed, narcissistic ex invites her to a swanky party after years of not seeing each other, she knows what she has to do: prove he didn’t crush her self-esteem and she did fine without him. Unfortunately, she needs a fiancé and a lot of fantasy to make it work.

Gabe Logan has his own struggles: running a diner bequeathed to him by the dead owner, drowning in bills, and dealing with his own troubled ex, things aren’t easy. When he puts himself in SASS’s catalog hoping to make money, he has no idea the girl who hires him as her husband-to-be might also be the answer he’s looking for. After all, he’s not aiming to be Mr. Right, just what she needs right now.

Despite their business arrangement, Nikki and Gabe discover humans are more complex than a contract—money and playacting aren’t enough to dampen real attraction, chemistry, and emotion.

Nikki tried to appear nonchalant as she entered the diner. The place was packed, most of the tables full, and all eyes turned to her as soon as she stepped through the door. Eyebrows shot up. Looks of surprise turned to appreciation, at least on the male faces. She supposed she was a bit overdressed for this establishment, at this time of evening. Or any time, really.

She’d gotten her hair done earlier—she wanted curls tonight, and she wasn’t that skilled at making her ultra-straight hair curly and keeping it that way. It tumbled down her back and was pulled away from her face with a paisley pink headband to match her dress. She really did look like some old school debutante. She’d also watched YouTube videos and did her makeup as flawlessly as possible. Her previous plan, with this look, was to make Jeff want to stab himself with regret.

Now, it was to make Gabe drool.

She strolled to the counter, ignoring the looks as she passed between tables. The heels she wore made her a few inches taller and helped keep her posture straight. The night was warm, so she’d added only a silk wrap that matched the dress. At least it was hiding the back of it from these gawkers.

The guy behind the counter stared at her too, slack-jawed. He was tall and about her age, and he wore an apron.

Davina came out from the back, then. She stopped and looked at Nikki. “Oh, hey. How’s it going?” She scowled at the man. “Don’t you got some cleaning to do?” She whapped him on the arm. “I’m your boss tonight, and I don’t wanna catch you slacking. Get back there and help George, I’ll holler if we get an order.”

The man grumbled and disappeared through the doorway behind Davina, casting Nikki one last look.

Davina leaned on the counter, peering over it. “That’s a nice dress. Gabe said it was sexy. He wasn’t lying.”

Nikki smiled. “Thanks. Is he around?”

“He’s finishing getting ready in the office.” She looked over Nikki’s shoulder. “You need some more fries or something, amigo?”

Nikki looked over her shoulder. A guy was turned around in his seat, staring at her, but at Davina’s ominous question, he turned and went back to his meal. Nikki turned back around, biting her lip to suppress a grin.

Davina took a sip from a paper cup. “Half the guys who come in here never seen a woman’s bare legs before.” She thumbed toward the back. “You wanna go back and get him? Surprise him.” She winked. “I think you’ll like how he looks.”

“Uh … sure?” She didn’t want to impose. “If he’s not ready, I can wait out here though. Or in the car.” She didn’t particularly want to sit in here, on display.

Davina walked around the counter. “Nah, come on. You can see the behind-the-scenes stuff. Where the magic happens.”

Nikki followed her down a short hallway. It led to an area in the back where the restrooms were, and one other, unmarked door. Davina knocked on it.

“You got a visitor!” She didn’t wait for a reply, but opened the door and leaned in. “Your date is here.”

Davina waved her in, though judging by that exclamation, he didn’t seem ready. Still, Nikki stepped into the room.

Gabe stood in the middle of it, near a desk, and like everyone else, he immediately went still and stared at her. She didn’t mind his stare. In fact, she was staring back at him.

Damn, he cleaned up nicely. He wore a black silk suit with a pink button-down underneath—to match her dress, she assumed. The suit had to be tailored, because it fit his burly, stocky form like a glove and enhanced all the best parts: his broad chest, his hips and meaty thighs, his wide shoulders. The pink looked good on him too. It went with his skin tone and the pastel brought out the blue in his eyes. Thankfully, he wasn’t trying to rock a hat tonight, and the smooth, streamlined look of it all, along with his bald head, made him appear stylishly hip and sophisticated.

She tried to unstick her tongue to say some words. Apparently, he was doing the same. Davina looked between them with a delighted, somewhat evil smirk.

“I gotta go run the place,” she said. “You two get yourselves prepared for your big night.”

She slipped out of the room, closing the door behind her.

“Wow,” Gabe breathed out. He blinked a few times. “You look amazing.”

She licked her lips. “I could say the same about you. You look really good.”

They stood in awkward silence for a moment. Memories of the night before last came rushing back and made her breath catch. The scent of his musky, alluring cologne hung on the air.

“Uh.” He shifted and tugged at his blazer. “I hope this works for you. I mean, I want to make sure I’m living up to what you want me to be tonight.”

She walked over to him and stroked her hand down the lapel. “It’s perfect. I’ve only seen you casual so far. This is something else.”

He chuckled and rubbed a hand over his head. “Yeah, much nicer than an apron or a t-shirt, huh? I promise I’ll act a lot more confident at the party. I’m just a little nervous right now.”

“I’m really nervous too.” She took a deep breath. “But I think together, we’ll knock them all dead.”

“Yeah?” He smiled at her, his eyes shining in the overhead light. Damn, he was handsome. And pretty. Both at the same time. All man, and yet, she liked his soft edges.

Sometimes, the things you want in life just seem too far out of reach. That’s the case for Nikki. She wants to run her own vintage shop and she wants a boyfriend. Neither of those things seems possible until she hears about the SASS. Then she gets more than she bargained for. This is a sweet but steamy contemporary romance, with characters to make you smile. Gabe and Nikki both have their own quirks, concerns, and foibles, but together, they support and help each other. Seeing Nikki regain her self-esteem was a delight to read, as well as Gabe’s reactions to when she was being ‘naughty’. Both of them have serious issues to contend with though and it is done in such a way to make them ‘nice’ people without giving the reader tooth decay. There was also one scene where it looked like communication had faltered but Nikki decided not to be a pushover and to find out what had happened. For me, this was the turning point of the book as it could have gone oh so very differently without them talking to each other. I like a bit of angst but not when it’s completely unnecessary. This is the third book in the series and yet I would definitely say you can read it as a standalone, as I have. Following on from this one, I would love to read the others. Absolutely recommended by me.

​Nikki’s been invited to a big party at her ex’s house. What better way to show him what a jerk he was and exactly what he’s missing then by showing up. Except, she’s no better off then when he left. So, she fakes it and goes to SASS to order a date. However, the date turns out to be a lot more intriguing than she could have imagined. Gabe is as cute as he says he is. I instantly liked him. Gabe and Nikki have a great chemistry from the beginning. This story really pulled me in. It’s not a unique plot but the writing is really top notch. I enjoyed the banter. When Gabe and Nikki meet her ex, it’s an entertaining ride to the finish line. Their romance is just shinning bright. Each chapter, each event, each day they grow closer, all of it had me reading into the late hours of the night. Add in some trouble with a junkie and Nikki’s ex. This book is fantastic with an adorable couple! Seriously, if you like romance then Mr. Right Now should be at the top of our reading list! You MUST READ Mr. Right Now and prepare to swoon!