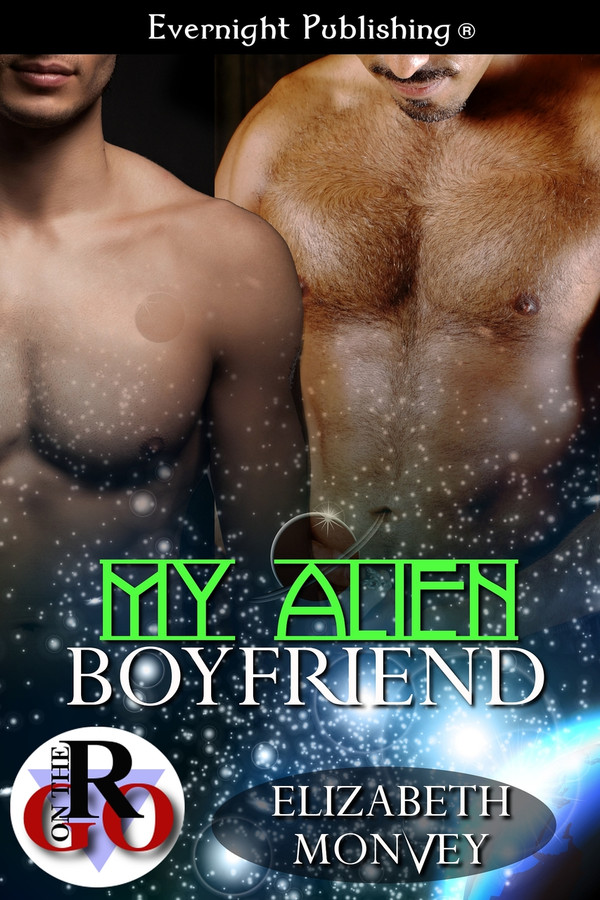 Parker Iwata loves his boyfriend, Mace Smith, and he trusts in the knowledge that they are honest with one another on everything. Although they had a whirlwind romance, he knows that Mace is the man he’s going to be with forever.

But one tragic accident changes everything.

Mace Smith is not from this world. He’s a visitor, one that has special powers to bring Parker back from the brink of death. But in doing so, he must give up everything and leave Earth. Can he possibly convince Parker to go with him back to his world?

Parker’s eyebrows shot up. Sometimes Mace was very literal with words. “Uh, yeah. Have I told you how sexy you are when you go all dictionary on me?”

“No,” Mace murmured as he ran a hand over Parker’s ass. “Tell me more.”

“How about I tell you upstairs, right before you fuck my brains out?”

Mace’s dark eyes lit up and in the next second, Parker found himself slung over Mace’s back as he hurried up the stairs. Moments later, he was flung onto the bed where he watched his lover perform a striptease of his incredible body. Truly, there wasn’t a male specimen formed any better than Mace Smith.

Tall, with rippling muscles barely contained by his shirt, Mace had to turn sideways to fit his broad shoulders through a door. Black hair with a neatly trimmed beard and mustache, dove gray eyes, and a fine pelt of hair on his chest. Parker admired the defined pecs, with puckered nipples hard like marbles that tapered down to washboard abs and narrow hips. His cock was long, straight and thick, jutting out between thighs hard enough to crack walnuts. Fluid dribbled from the hole, announcing his excitement.

“Beautiful,” Parker whispered. “You are the sexiest man I’ve ever seen, even when you translate the dictionary verbatim.”

Parker took off his glasses and set them on the nightstand where he grabbed the lube. They’d forgone using condoms after getting tested and committing to their relationship, and although many would say that it was stupid trusting each other’s lives with a vow not to cheat, Parker figured it was the same within a heterosexual relationship. Commitment and love depended on trust and respect and Parker trusted Mace, just as he knew Mace trusted him.

They melted into each other, their mouths coming together, lips and tongues anxious to devour one another. Parker was lost in Mace’s hot mouth dominating his. Mace slid his hand up Parker’s thigh to find and squeeze his cock through his pants. He gasped as Mace massaged the hardness before moving to the zipper. In a few seconds, his hand slid under the waistband. There wasn’t much room in the jeans so Mace couldn’t do much except brush Parker’s cock with his fingertips. Parker shifted, trying to get closer to Mace, groaning in frustration when the denim didn’t give way. Mace withdrew his hand.

“Get your clothes off,” Mace ordered as he grabbed hold of his own cock and began to leisurely stroke himself.

Parker got to his knees and unbuttoned his shirt, slowly. He batted his eyelashes in a flirtatious manner. “Why? Do you want to fuck my ass?”

He lightly slapped one jean-clad cheek.

“My Alien Boyfriend” started out a little choppy but it got better thru the story and the attraction between Parker and Mace. When Parker is injured Mace must make a hard decision. I liked the plotting of this take on an Alien / Human love story. The author adds a little twist to keep the reader’s attention and it made for a good read. I gladly recommend “My Alien Boyfriend”.

This is a really good series. Each book is a stand alone but they all share True Love, some Angst and an HEA. Elizabeth does such a great job in bringing life to her characters and landscape. Parker has moved in with his boyfriend Mace and they are navigating the streets of living together, but really it goes quite smoothly, True Love and all. Parker works at the library and Mace came from money and was taking classes at UNLV. Tragedy strikes Parker and Mace needed to make a Worldly decision. Like I said earlier, I think Elizabeth does a superb job with these short novellas. She really has a knack for telling a big story in a short time, one of the reasons I say this is because when I finished these books, I was happy with the way the story ended but I wanted more. She does a great job in closing out her story, she makes you appreciate the characters and the things that happen in their lives and leaves you happy with the outcome. With that being said that is what leaves me wanting more, I could read another couple hundred pages in Parker and Mace’s story.

This is the third book in a very entertaining series about men with non-human boyfriends. All of them are very much in love, but none of them have a clue that their partner is hiding a big secret. After the werewolf and the vampire, this third human has, unknowingly, fallen in love with an alien. Witty and humorous at first, with some serious notes when the crisis / decision time hits, the story made me smile. I mean, imagine you’re an alien and are trying to find out some details about the planet you’ve just landed on. You know, just so you can blend in. What do you do? Well, quite clearly, you go to the local library and get a few books about world history. Why did I never think of that? With some great details like this, as short as the story is, it still managed to thoroughly captivate me. Parker, who works in the local library I mentioned above, has hit the relationship jackpot with Mace, and he is more in love than he ever thought possible. Mace may be from “back east” and Parker doesn’t know a lot of details about his past or his family, but he loves Mace to distraction. Parker’s traditional Japanese parents don’t approve, but this is Parker’s life, so he lives it the way he sees fit. Until he has a freak car accident and ends up in the hospital with severe brain damage and in a coma, and his parents swoop in and forbid Mace from seeing him. Mace may be from another planet, but he is curious and wants to learn. He has been sent to Earth to study humans, and even though he is supposed to return after a year, he loves Parker too much to even consider it. He can stay, but the one thing he cannot do is intervene, thereby risking exposure of the aliens to humans. So his decision to save Parker means he will have to leave and never see him again. Still a better choice than letting Parker die, but heartbreaking. I was very grateful the author came up with another solution! If you like stories about aliens who are similar enough to us so they can hide in plain sight, if the issues of two men from different species who are meant to be together sound interesting, and if you’re looking for a short, entertaining, and very touching read with truly “star crossed” lovers, then you will probably like this short story as much as I did.