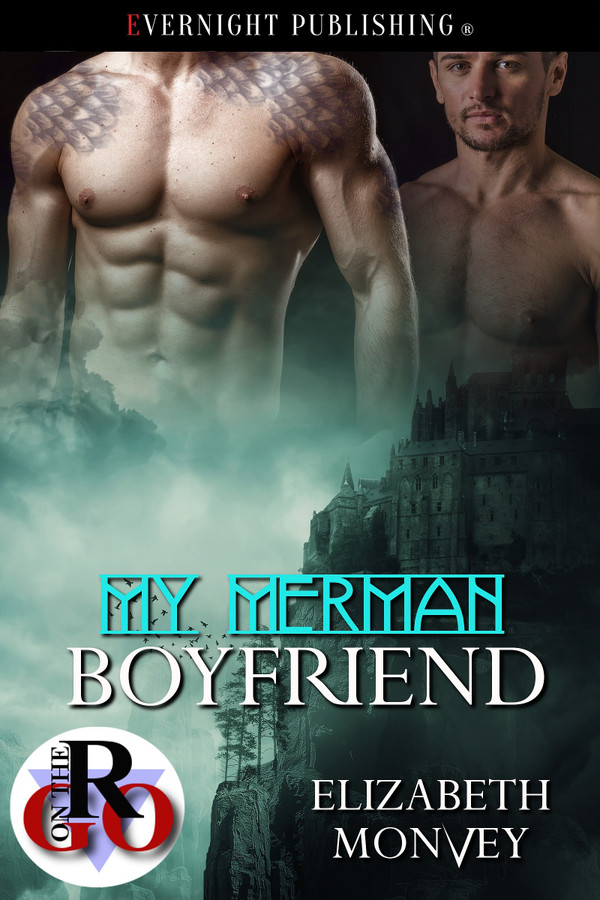 Rian dreams of the sea. When he wakes up in a hospital after an accident, he is unable to remember anything. Not even his boyfriend, Jarred.

He is whisked away to their castle, where secrets make him hesitant to trust what Jarred says. As he tries to uncover the secret of his injury, he stumbles across a hidden tunnel…and a vast treasure in lost shipwreck gold.

It isn’t until he follows Jarred down into the tunnel that he discovers his boyfriend is not completely human.

Jarred pulled out his cell phone and, with a few taps, brought up a classical piece of music. The haunting strings echoed in the room. He stood and held out his hand. With his heart beating quickly, Rian took hold and Jarred pulled him into his arms to sway in rhythm to the music.

“We danced like this the first night we made love,” Jarred whispered, resting his cheek against Rian’s head. “On the beach, in moonlight, with the gentle sound of the tide coming in as our opera.”

Rian closed his eyes and could picture the hypnotic moment that Jarred weaved. His blood heated, his cock hardening at the sensual sway between them. Jarred placed a small kiss against the sensitive skin behind his ear.

“I held you close, and our heartbeats pounded in sync,” Jarred continued. “I knew you were meant for me just as you knew I was meant for you.”

Jarred ran a hand down his back, until he reached Rian’s ass. Squeezing hard, bringing him in even closer. Their breaths mingled, desire chasing away any lingering doubts. All Rian wanted was to feel Jarred’s lips upon his. They melted into each other, with the first tentative kiss swiftly deepening. A memory drifted through Rian’s mind. He’d felt this before.

He’d tasted these lips before.

He tried to grasp the moment, tried to pull it out of the depths of blackness, but the more he concentrated on it, the faster it slipped away. With a groan of disappointment, he pulled back. Jarred’s eyes glowed with a spark of otherworldly passion that Rian couldn’t explain.

Jarred closed them and took a deep breath. When he opened them back up, the iridescent brilliance had gone. “Rian—”

Rian pulled away. “I remembered your kiss.”

Happiness lit up Jarred’s face. Rian held up a hand.

“I want my memory back before we proceed with anything,” he said. “I can’t sleep with you when you’re still a stranger to me.”

“But we’re not strangers,” Jarred whispered.

Rian thought about the kiss. “My body knows you’re not. My head is saying something different.”

Short but sweet. Although this is book 7 of a series, it is entirely stand alone. I have not read any of the previous books in the series and I had no idea there were any until I checked out Amazon. Rian, the main protagonist, came across as a real sweetheart. Despite a difficult situation, he kept his head and trusted his gut. Even when his journey revealed shocks and dangers, he never faltered, although he was, of course, knocked off balance. Jarrod was a different kettle of fish and we are kept guessing until the end as to whether he was a good guy or a bad guy. Considering the short length of this book, I found the characters surprisingly well developed. Clearly, they are not as fleshed out as they would have been in a full-length novel, but for a short the author has done very well in presenting two unique characters with distinct personalities. The book is generally well written, and although the amnesia trope is somewhat tired, the author manages to freshen it up with some nice twists. I would recommend this book for someone who would like a quick, sweet read. It’s the kind of book you can easily read in one sitting and will leave you feeling warm.

This was a very quick read with quite a bit happening. Though it was a quick read it was still good read! Rian wakes up in the hospital. When the man sitting next to him calls him Rian, he has no clue who the man is nor does he recognize his own name. He does not know what happened to him and why he is in the hospital. Jarred is so relieved when Rian finally wakes up. He believes that Rian hit his head on one of their boats and fell overboard. But now hat he is awake and Jarred realizes he does not know who he is, he is devastated. He assumed that when Rian woke up everything would be okay, but now he is finding it hard. It is hard because Rian keeps asking him questions he cannot answer for fear of making his memory worse. All he can do is hope his memory and the love between them returns. But as he days pass and his memory does not return, Jerrod knows he is going to have to at the very least answer some of Rian’s questions. But when Brogan, Jerrod’s childhood friend, starts with snarky comments, things start to return to Rian – but the memories he is having may not be what Jerrod wants to hear! This was a short story but a very good read. I enjoyed the bit of mystery and the fact that I was questioning whether Jerrod was a good guy or not. Definitely a book worth checking out!