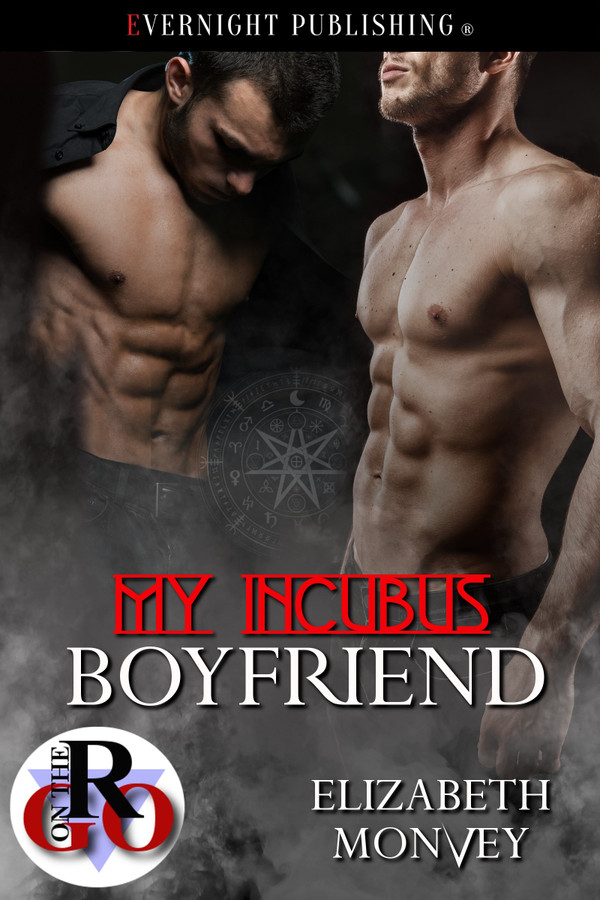 Emmett owns an occult store. He firmly believes in magic. His boyfriend, Jackson, does not.

Yet none of that matters because they are devoted to each other—until the night Emmett becomes the unexpected target of a sexual demon … an Incubus. Suddenly Emmett can’t remember their passionate nights. He’s slowly being taken over. And Jackson struggles with the realization that magic might just be real after all.

Now Jackson has to step in to fight for his love before the demon completely consumes Emmett.

He touched the cast iron rim, and a bolt of electricity seized through his body. Shocked, he cradled his hand as he backed away. The thing had never conducted such a static charge before, and he’d bought the things years ago at an estate sale from a known practitioner of Wiccan magic. Suddenly, everything about it now creeped him out, so Emmett decided to leave it be and head home. Gathering his stuff, he headed toward the door when suddenly a fierce wind whipped out of nowhere to encircle him.

Frightened, Emmett stumbled back and tried to bat at the air that sucked the oxygen from his lungs. He couldn’t breathe. The swirling winds tore through him, bringing him to his knees. And as quickly as it had started, it abruptly ended, leaving him gasping.

“You are a good vessel.”

The whispered words echoed all around, and Emmett looked up to see a shadow approaching. Slowly, it took shape, coalescing into a tall, thin creature with horns protruding from the sides of its head. Fear sliced through him, and Emmett tried crab-walking away from it.

“I will keep you,” the thing seemed to hiss. Its bright yellow eyes blazed with the heat of the sun. The thing solidified even more, turning into a man, one with chiseled abs, a beautifully sculptured body with a large cock and balls.

“W-what are you?” Emmett cried out.

“You will feed me,” it taunted, not answering his question. In fact, Emmett couldn’t see its mouth moving. “I will be you and you will be me.”

It stopped at Emmett’s feet, and the thin lips twisted into some semblance of a smile. In a flash, Emmett remembered all he’d forgotten in the night before, and he remembered seeing this … creature? … before. It had rushed at him, making him collapse and pass out. And through the night, all the sex with Jackson had been because of this demon.

“Tell me what you are,” he whispered, horrified.

“I am a nightmare, induced to lie upon the unknowing. I have existed as far back as Mesopotamia and Samaria, to beget with women a demon hybrid. I thrive upon the sex of humans, no matter if be male or female.”

Emmett wracked his brain for such a creature, finally coming to one horrifying conclusion. “You’re an Incubus?”

Not a bad little story. It had some really good points. It packed a lot in a short amount of pages. You got the gist of the plot and all. My only issue is I wish maybe there was a little more to it. Not necessarily the length, but maybe a bit more conflict or something, considering how Jackson was so against everything Emmett did in his shop….which I found odd. They say opposites attract and in this case, they definitely do. Emmett and Jackson couldn’t be more different. Emmett running an ‘occult’ shop and Jackson an attorney. Jackson not believing in a thing that pertained to the ‘other world’. And Emmett being in the middle of it. But when a customer comes in and tries to cast a spell in a powerful cauldron in the shop, Emmett ends up being the one who has to deal with the effects of it. And Jackson finally has to admit, there’s more to this life than the black and white. Especially when he sees first hand what that spell has done to his loving boyfriend. Now he needs the help of Emmett’s friend and coworker to rid Emmett of what is plaguing him before he loses Emmett for good. It’s hard to believe in things we can’t see. Heck, look at the world’s oldest religion, Christianity. So many believe in a God they can’t see, hoping that someone is really out there caring for them. But when you see the state of the world, you really wonder how true things really are. So, I don’t blame people for not believing or trying to find a ‘religion’ or something of the sort to have faith in. Something that shows the goodness of the world and not the bad. But unfortunately, with the good comes the bad. You can’t have one without the other, no matter how much we may wish it so. But when it comes face to face with you, you can’t ignore what’s right in front of you, no matter how much you want to. And that’s what Jackson had to deal with. Not only that, but with the fact that because of it, he could lose the love of his life, permanently. It’s a hard pill to swallow. Thankfully, Emmett had someone with him who knew what to do. But it didn’t make it easier. It’s a good little story. Short and to the point. I’m kind of curious about the other 5 in the series to see what happens in those. I may have to go back and read them all.

I found this to a very unique read. This is a short story that I consider to be mostly erotica with a slight story mixed in. Everything in this book moves very quickly since it is such a short read, so don’t skip around because if you do you may miss something. Emmett owns a shop called Blessed Be. It is a shop that his boyfriend Jackson considers a voodoo shop, but Emmett believes it to be so much more. This fact is proven true because before closing up for the night a strange man comes in and tries to cast a spell using a very old relic called The LeFay Cauldron. Emmett chases the crazy man off but unfortunately for Emmett the man is able to call forth an incubus. The incubus only knows that he was called forth and that it plans to do what it is meant to do. This means that Emmett is about to have something very bad happen to him. He is about to be inhibited by the incubus and sadly Emmett does not even realize that it has happened at first. Jackson knows something is off about Emmett but he lets it go with all the great sex the two have been having. But what will happen when the incubus decides to take over completely? Will Jackson be able to handle that Emmett may end up sleeping with someone else? Will Jackson even realize that it is not Emmett who is in front of him before Emmett is lost forever? This was a good read. It is very fast-paced and a lot happens in a very short period of time. I have always loved this type of reads so I was very excited to read this one. I wish it had been a little longer because I think it would have made it that much better. This was definitely a different type of read from previous incubus books I have read but it was good nonetheless.

This is only 46 pages but it’s a really cute story. Emmett is into the occult but his boyfriend Jackson doesn’t believe. Then Emmett comes home not quite himself and Jackson is left trying to figure out how to save him. ​ I really like Emmett and Jackson. They feel like an established couple and they are adorable. This is an interesting tale about magic and spells. The story is quick though and the sex is a bit too much. I think less sex and more plot would have made this short feel more complete. The ending is satisfying. As is, this is a good story for before bed or a quick trip in the carpool. Just don’t let anyone look over your shoulder, lol.