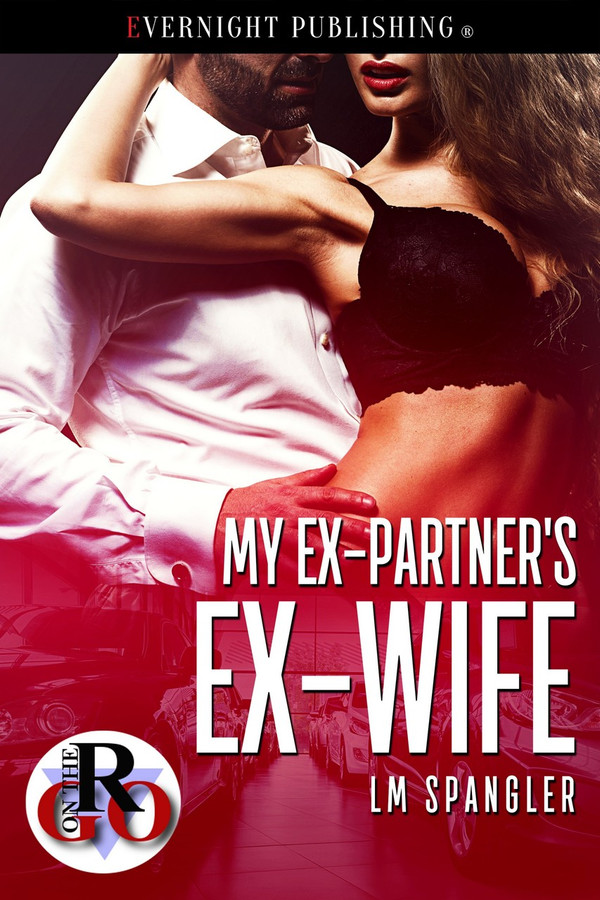 Ridley became Sterling Motor's administrative assistant—and the object of Jack's desire. He had no idea the attraction was mutual. After an indecent involving her ex-husband, they grow closer, both mentally and physically.

Little do they know, her ex has no intentions of letting her go. Can they explore a life together even though she once belonged to someone else?

“Thanks, Jack. I know this might be awkward for you,” Ridley Asher said. “You never hung around us much.”

She had no idea. Jack’s libido went into overdrive every time he’d see her. Even in the presence of Dean Asher. Ridley was temptation with a capital T. Curvaceous, stunning, exotic. A man’s fantasy.

And his ex-partner’s ex-wife.

“It’s no big deal, Ridley. You need a job and Sterling Motors needs an administrative assistant. You win, and I definitely win. I’m organized when it comes to restoring cars, but I can’t organize this business to save my life.” He’d just walk around the shop with a raging woody for eight or so hours a day.

Her response bothered him. Ridley deserved to smile. “Dean doesn’t play into this. This is purely a business decision. You have the skill set I need and you understand the restoration process. You literally know the nuts and bolts of a job.” He leaned back in his beat-up leather desk chair, elbows on the arms, and steepled his fingers. “I will let Dean know I hired you. Just to avoid any surprises.”

She nodded. “Fair enough,” she admitted, wringing her fingers. “I hope I don’t put you in a bad situation, but I appreciate you hiring me. I can’t believe the firm closed down. We were in the green every quarter I worked there.”

“I’m not sure, but their loss is my gain.” He rose from his chair, reaching his full height of six-feet-two. He leaned his head from side to side, cracking the vertebrae in his neck. “I know this is spur of the moment, but can you start today? You’re already here.”

A brow rose. “Dozer?” A large piece of construction equipment popped into his mind.

He gave a mental eye roll. Dean had mentioned that she couldn’t find a man so she’d gotten a dog instead. Jack seriously doubted she had trouble finding men. His mechanics and metal workers stopped whatever they were doing and watched her walk to Jack’s office. A magnet had nothing on her.

“He’s welcome here. Three of my men bring their dogs with them. My only rule is they have to wear a fire retardant vest when they are around sparks or blow torches.”

“Again, fair enough.” She rose from the chair opposite Jack’s desk and maneuvered around the beat-up metal piece of furniture. She laid her hand on his arm and stood on her tiptoes. “Thank you, Jack. I’m glad Denny gave me the heads up on the job.” Her lips brushed his ever so softly, probably not to entice, but to show her gratitude.

Jack never meant to fall in love with Ridley but all it took was one night. He stayed away because he doesn’t poach, but now she is free. Can he convince her to give him a chance? My Ex-Partner’s Ex-Wife by L.M. Spangler is part of Evernight Publishing’s Romance on the Go line. It is a super quick read but it did not leave me wanting. Jack and Ridley connected quickly but it didn’t feel rushed. They had a history that segued nicely into a romance. I loved that Jack carried a torch for Ridley even as he did the right thing. I love that Ms. Spangler gave Ridley the chance for real love and devotion, not the caricature she had during her marriage. Now if only they can survive her ex. I needed a quick read and this story by Ms. Spangler fit the bill. It was well written and full of emotion and unexpected danger. My only wish is knowing why? It felt a bit incomplete without knowing what pushed Ridley’s ex over the line. I mean he appeared to be a douche but not crazy, so what changed. Overall I enjoyed this quick read and seeing Jack and Ridley find they&#039;re happily ever after.

Nothing like being off limits. This story is quick, but that’s what I liked about it. There’s build-up, sure, but the author got right into the tale. Ridley and Jack have chemistry. I liked how the author built it up. Not insta love or insta sex, but a slower burn, despite being a short story. Ridley is a tough cookie. She knows what she wants and she’s got an adorable pup beside her. I liked how she wasn’t afraid to stand up for herself. Jack is one part possessive and one part confused. How can he be in love with his ex-partner’s ex-wife? Easy. She haunts his dreams. I liked how he wanted her and never quite gave up the desire. Her ex is the real clincher. He’s a turd. I don’t like reading about abuse, but I’m glad he got his. If you want a quick read that’s perfect for a lunch break or right before bed, then this one is for you. Don’t miss it.

This book has so much potential! Great characters, hot hero (Jack) and likeable heroine. The problem is the ‘bad guy’, Dean. He is Ridley’s ex. He’s also Jack’s former business partner. The romance is really quick between Jack and Ridley but super hot. I wish the author had taken her time with them. Anyway, back to Dean. He’s the ex-husband, a total jerk that cheated on her. He marries a young woman and then comes back to tell Ridley he doesn’t want her working with Jack. Why? What’s his motive? He had a hot, younger, new wife so why hang onto Ridley? Then he’s beyond angry when he finds out Ridley and Jack are sleeping together. Again, why? Angry enough to pull a gun on them? Really. WHY?! He sounds like he moved on and then does a complete u-turn on them. I wish his motives would have been clearer. So, lots of potential with this book. I look forward to see what else this author comes up with.

A wonderful quick read with a satisfying happy ending. I don&#039;t want to give away any spoilers, but poor Dozer!

A Night With Her Ex by Laura Jardine