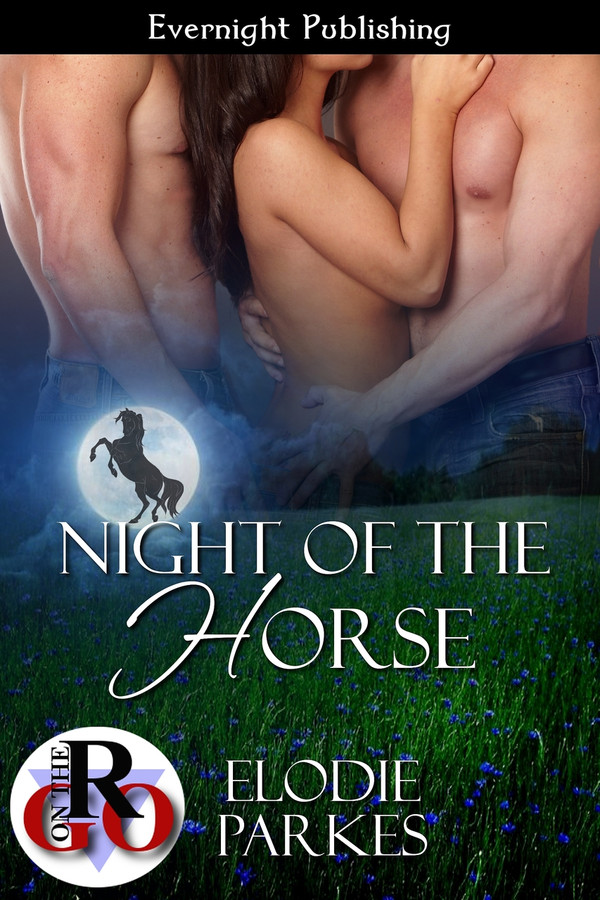 At night, Rosie watches horses dance beneath the moonlight, wishing to be as free as them. By day, she’s a lonely woman with no prospects at love. A sign in a store window advertising dance lessons changes everything.
Pretty soon Rosie is making moves with the gorgeous instructor, and his equally delectable best friend. Jude and Justin fascinate Rosie and bring her body back to life, but they’re keeping secrets that just may shatter the fantasy Rosie hopes to make reality.
Be Warned: menage (MFM) sex
Excerpt:
Rosie hesitated in the shop doorway. The door opened with the tinkling of the bell and a man stood before her. Taller than her by a head and some, Rosie found herself staring at his chest. She noticed his muscles even through his loose denim shirt. She looked up into his beautiful face. His eyes were such a dark blue they were almost black in the shade of the doorway. His eyelashes were long, thick, and definitely black. He had almost black hair, glossy and long, but tied back. She stared up at him.

He looked down at her and smiled.

“Are you coming into the shop?” His friendly tone made Rosie smile, too.

As he blocked the way, she nodded. “I’m about to inquire about the dance lessons. I saw the poster.”

The man watched her closely, as if taking a mental picture of her.

“I’d love to see you there. Come in and sign up.” He turned and pushed the door open again, holding it so she had to pass close to his body. Rosie enjoyed the proximity, letting herself dream for a moment that she could be held in his arms, pressed against his muscular chest.

“Thank you.” She expected him to leave the shop then, but he followed her to the counter and passed around to the other side. Another young man came out of a small office situated towards the back of the shop and jogged down to the counter. He was very attractive, his short, spiked hair almost white it was so blond. His eyes were a lovely chocolate brown. His smile lit up his face as he moved around the dark-haired man to talk to Rosie.

“How can I help you?” he asked. A flicker of amusement passed over the dark-haired man’s face. She looked past him to the blond one.

“Well … I’m thinking of enrolling for the dance classes.” Nervous around the two gorgeous men, her heartbeat sped up.

“You must. She should. Don’t you think, Jude?” The blond guy stood alongside the other man and addressed him.

“I do.” Jude accompanied his answer with a sultry look directed at Rosie.

She felt confused for a moment. It had been so long since a man gazed at her with any interest, and now, as she looked from one man to the other, she saw they were both interested in her.

Rosie is tired of being alone and craves the romance and love her friends have discovered, but she is unsure of how to find it. Then she decides to begin getting out more and signs up for a dance class given by the two most handsome men she has ever met, Jude and Justin. She has also lost some sleep watching the beautiful horses that come to frolic in the field across from her home. The attraction is there, but can a relationship between the three of them work? Can the two men trust Rosie with their secret? Or will they need to move again with broken hearts because of the rejection of the woman they love? You will definitely enjoy this story if you like shifter novels. The only problem I had was it felt a little rushed because it was such a short novella, especially the first love scene. The story is complete, but I felt that everything was on fast forward and would have like the scenes to develop more.

This was a pleasant short story, with an interesting fantasy/paranormal element. I think many people can relate to the loneliness that Rosie is feeling. Although, I am not personally a fan of instant love. I do like MFM stories, but in this story, somehow the two men didn´t fit as well. Still a quick and enjoyable paranormal story, well fitted to the short story format.