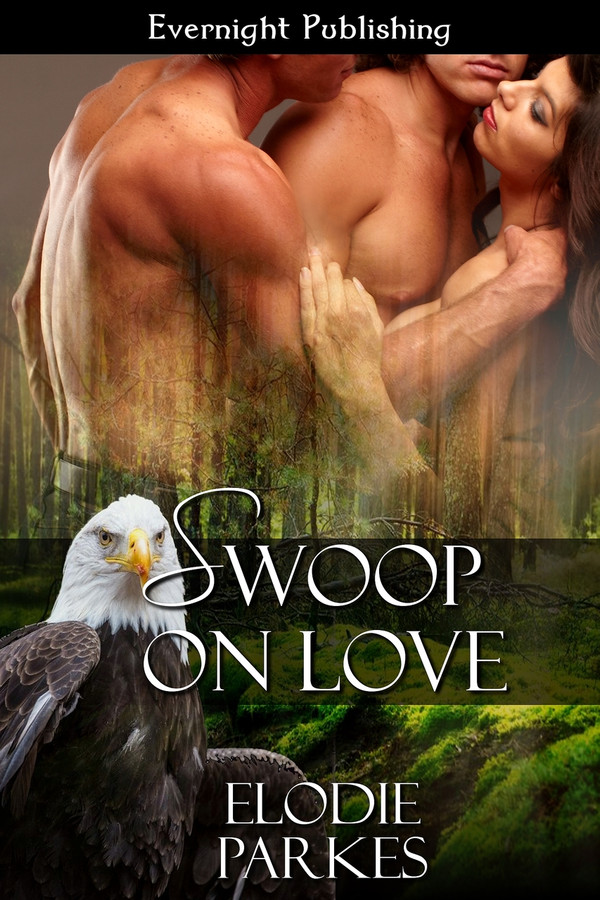 A lazy evening takes Jeanie out to explore her new neighborhood. In a small town with an unusual name, she finds two men who fascinate and intrigue her.

Reed and Nathan are best friends with an unbelievable secret. One they’re afraid Jeanie might share with the outside world. But even as they question her motives, Jeanie finds herself falling for not one, but both of them. To make their relationship work, the men will have to trust her, while Jeanie attempts to accept the impossible.

She took a step back, wondering if he would suddenly swoop on her. “So why are the houses all empty? Have they really been bought?”

The man nodded, putting his hands into his jean pockets. His gesture was attractive as his muscles moved under the dark blue, cotton T-shirt he wore. “They have. Why are you back here?”

She quaked, surprised at the forthright way he asked. How can I tell the truth? I can’t. She moved another step back from him. “I’m leaving now. Sorry, I had no idea the whole road was private. You talk as if I’m trespassing.” She turned and walked swiftly to her car. He’s gorgeous, sure, he’s mysterious, but I wish I’d met him in different circumstances. As she approached her car, she took her keys from her pocket and unlocked it, ready to dive in there and get away.

He gave her a fright when he leaned around and opened her car door for her.

She jumped away and he laughed.

“Sorry. I didn’t mean to startle you.”

Jeanie took hold of her car door and turned to him. “Thank you.” She was about to get in when he touched her lightly on the arm. It sent a shock of sensation along to her breasts. She shivered.

“I’m Nathan, by the way. I’ve been hostile and rude. I’d like to remedy that. Could I offer you a drink? There’s a restaurant further along the road, they have a great garden bar. It’s still a lovely evening.”

She stared up into his face, overcome with longing to be with him in this restaurant garden. He looked hopeful and interested. Loneliness made her reckless. She nodded, casting aside suspicion and taking a chance. “Okay, yes that would be nice.” She didn’t add that it would be the first Saturday night in more than eighteen months she wouldn’t spend alone.

“I can go get my truck if you’d like me to drive us.” His voice gave away his happiness at her answer.

“No, I’ll drive us. You can give directions.”

He smiled and little lines appeared next to his eyes. They were endearing.

Warmth spread through her as she imagined hugging him.

He went around to the passenger side as she got into her car and started the engine.

When he settled next to her, she looked at him. “Which way?”

The restaurant was visible for a long distance on the straight road before they reached it. Lit up in the summer evening, fairy lights twinkled in the trees out front, and strings of them attached to the building looked like a sparkly fringe, even in the remaining daylight.

It was unexpectedly exciting to be next to this man. She felt a wave of pleasure that he’d asked her out. “It must look so pretty when it’s really dark.” Jeanie smiled as she glanced at Nathan.

“It does. It’s always full, too. It’s a happy place to be.” He sounded wistful.

She looked his way again. He stared out the side window, so she couldn’t see his expression. Suddenly under a strong wave of need, she wanted to hold him, kiss his incredible lips, snuggle against that muscular chest, and then… She sighed.

“That was a big sigh. You know you haven’t told me your name.”

Surprised that it hadn’t occurred to her to tell him her name even when he told her his, she answered. “It’s Jeanie, sorry.”

“A pretty name for a pretty girl.” His tone was tender.

She was tired of her solitary life. A spark of hope flared that maybe she’d met a man interested in her, even if he was involved in some kind of strangeness.

They reached the restaurant and Jeanie parked her car. Nathan got out of his side and swiftly appeared at Jeanie’s door to help her. He smiled at her as she thanked him. He didn’t move away from her and they stood so close to each other, Jeanie yearned to kiss his perfect mouth.

He bent toward her and whispered, “You’re so pretty. I’m very glad you came back. Why did you? You never told me.”

His breath teased her ear, and her nipples peaked against her T-shirt. She slowly moved her head until her mouth hovered a centimeter from his. She closed her eyes, captivated by his nearness. He kissed her then, softly. His lips explored hers, firm, then soft and moist. A simple touch of his tongue against her mouth sent her into a spiral of desire. Her whole body responded to the kiss. A rush of heated desire wet her pussy. Her breasts were heavy as she craved his hands on them. She leaned into the kiss. His arms circled her, pressing her against his hard body. He stopped the kiss and although he still held her, he loosened his grip and moved a fraction away.

“I wanted to kiss you as soon as I saw you. Let’s find a table.” He walked easily and confidently. They navigated the array of small, square tables dotted around the paved area at the side of the main restaurant building. He stopped next to a big tree and pulled out a chair for her at the table there.

Jeanie lives in an area that provides her with the freedom to pursue her interests in photography. Upon discovering something phenomenal, she tries to figure out what she witnessed. In so doing, it leads her to an unexpected but tantalizing surprise that she doesn’t expect. You never know what surprises await you when you live in any neighbourhood, but for Jeanie, she lucks out on meeting two of the most handsome men — Reed and Nathan. The author introduces these three characters with electric connections and the spark between them sends a charge through to the reader. From the first page, you are intrigued by the chain of events that gets them all together that you can’t put the book down. With a strong female character, Jeanie is a sexy, vibrant young woman who accepts both men with open arms and an open heart. The sexual tension between them is released when they explore each other’s bodies and fall into ecstasy. This romance is exotic and for the open-minded and adventurous soul. With the secret the men share between themselves, will their new female companion forgive them for holding back? Elodie Parkes writes this exciting story that takes your breath away.

Jeanie moved out to a neighboring county to help mend her broken heart. With lush woodlands on either side of her cozy little house the fresh start was what she hoped could help get her life back on track again. With small excursions to explore the pretty countryside, she decides to visit Owlswick one Saturday afternoon. After taking a photo of a large, beautiful owl she meets a strange, angry man named Reed. Soon, Jeanie is involved with both Reed and his mysterious friend Nathan, and Jeanie realizes there is far more than meets the eye to the little town of Owlswick. This is an interesting and very different take on shape-shifters. I’ve never read about were-owls or were-eagles and it was certainly something unique for me. I enjoyed how the author also had played around with some of the rules of the paranormal. Whereas it’s not uncommon for vampires to have no reflection, in this instance when Jeanie takes a photo of a magnificent, huge owl, when she looks at the photo instead she sees a man in the bird’s place. At times I had to wonder if the author was making a bit of light fun at the heroine – I laughed aloud when Jeanie first starts to discover the mysteries at Owlswick and says to herself “I’ve stumbled on something weird.” Because yes, if I’d taken a photo of an owl in broad daylight, then upon looking at the photo on my computer seen a man in the bird’s place weird is the least of what my thoughts would be! While I didn’t find the whole book to be lighthearted, it’s also not a deadly serious, dry kind of story either. I liked this blend of solid plot with a bit of humour thrown in. If you are a reader who can suspend disbelief, sit back, relax and enjoy a really out there story, I think you should give this book a chance. Sticklers for logic and rules might find too many things to nit pick (owls flying around in the daylight hours, Jeanie’s inner thoughts leaping to massive conclusions, going back to “investigate” the small town she clearly thought moments ago might be quite dangerous). But really, when one is talking about were-owls and were-eagles, it’s not like the usual rules should apply, or at least not to my mind. I’d recommend this book for more broad-minded readers who like something different. The author has written an interesting tale not only of two men finding their perfect woman to share, but also of a heroine whose eyes are opened to a completely new side of the world – a paranormal one. Best of all it I found it doesn’t take itself too seriously, and the sex was very hot. Different and interesting, I enjoyed this novella.

Jeanie is an architect. She has an office in the city and likes to escape to her home, an old farmhouse in the outskirts of Drayton. This weekend she’s out and about exploring and comes across an old sign pointing toward a place with the odd name of Owlswick. She comes to a group of buildings that look rundown and abandoned by time. Suddenly a large bird swoops down at her car and comes to rest atop an old sign. Exiting the car slowly she takes her ever present camera and tries to snap some pictures of the bird before it flies off. Reed comes upon her and tells her she is on private property and the bird is an endangered species and no pictures are allowed. Jeanie lies and says she wasn’t able to get any pictures and leaves. When she arrives home she downloads the pictures to her computer. Instead of pictures of the bird there is a man perched atop of the sign, staring directly at her. Later she returns to Owlswick to make sure she is not crazy and comes across Nathan and recognizes him as the man in the pictures. Readers find two men, a dangerous secret, a woman looking for love and the beauty to be found in nature. What a better combination could you ask for? Swoop on Love was a bit rushed. It’s a short novella. The sparks flew between the characters. I found that it rushed the characters into a physical relationship with no build-up. That is my only fault with the story. Otherwise it moves quickly so there are no dull spots. I loved Jeanie when she tried to reason with herself on how she could prove to herself she wasn&#039;t going crazy. Ms. Parkes delivers a story filled with warmth and humor. I look forward to seeing what else she has to offer.