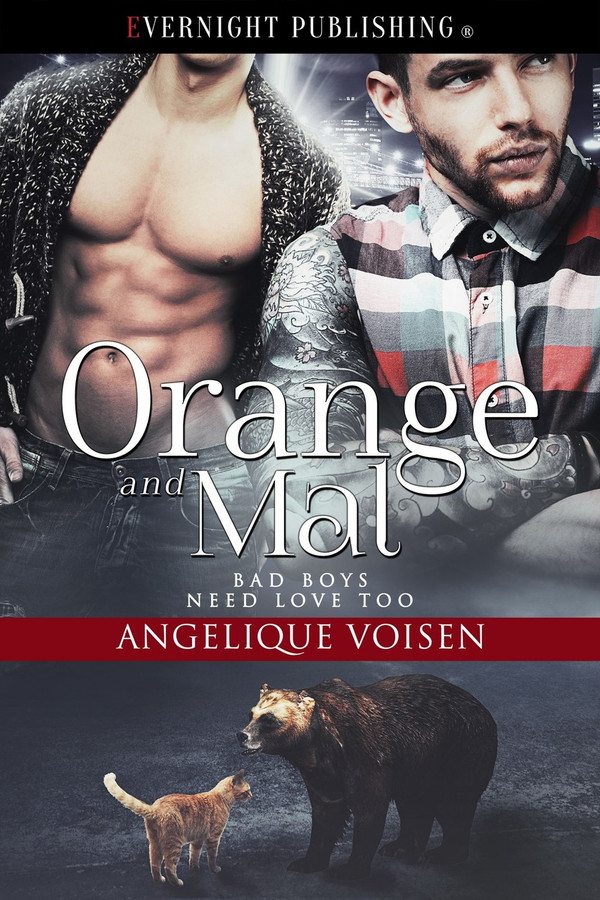 Tabby shifter Orange leads a double life. Kindergarten teacher by day, thief by night, Orange’s sick of juggling two lives. He wants to leave the life of crime behind and find a mate to settle with, but fate has other plans. A job gone wrong lands him in the path of a ferocious werebear, but Mal doesn't seem interested in turning him over to the cops.

Mal’s always been good at fighting and he’s done his share of bad deeds. He hates thieves, but there’s something about Orange he can’t ignore. His bear knows Orange is his to claim, mate and love—but will Orange accept a man who isn’t afraid of getting his hands dirty?

The clicking noise of the lock made Orange jump.

Oh God. It’s him. The werebear.

That had been his first thought. The next few minutes, he couldn’t remember. Fear thrummed through his entire system when Mal grabbed him and started dragging him to God knew where.

Orange had been around dangerous men before. No one frightened him as much as Mal, not because he was terrified of what this man was capable. But because seeing Mal in the daylight world confirmed he hadn’t dreamed up the lust between them.

The difference was lost on Orange. How could he fall for a man who could rip him apart with those massive inked hands?

“Aren’t you going to say anything?” Orange finally whispered, uncertain of the silence, of Mal simply staring him up and down.

Each look felt like a thousand touches, only making him want for more. To feel those huge hands on his body, those lips sealing his.

Orange couldn’t let his dick do the thinking. Something bigger lay at stake. If Mal outed him now, he could kiss his dream of teaching goodbye. All his life, he did whatever he could to separate his two worlds. Now that they collided, Orange didn’t know the first thing to do.

“You owe me an apology for a start. I lost my job because of you.” Accusation bled from Mal’s words, but since the werebear didn’t tear his head off, Mal was willing to listen.

At least Orange hoped Mal would be reasonable. Why else would a guy like Mal be here, accompanying his niece?

“I’m sorry.” Orange dropped his gaze. “I needed the money to bail my brother out of jail.”

When the werebear didn’t speak, he continued. Once he started, he couldn’t stop. Orange’s soul had been burdened with the secret of his double life for so long it felt good to unload his sins.

“Teaching kids is my life, my passion. I planned on quitting my other night job, but my brother can’t stay out of trouble.” Orange clenched his fists.

His back hit the metal shelves behind him. Tears prickled at the corners of his eyes. Oh fuck. He shouldn’t cry, especially not in front of Mal.

Shame filled him and mingled with guilt as realization dawned on him.

He knew Sophie. She was one of his favorite kids. She was a rare one, the kind who shone in a roomful of other kids. Orange met her mom once, he knew the little girl came from a single-parent household. Lately, she talked about her uncle who stepped in when her mom was busy.

Mal couldn’t be all bad, despite his scary appearance. He remembered how the other parents looked at his tatted-up, scarred and muscled appearance and his heart eased a little.

It must be hard, to be judged all the time.

Orange owed him an explanation, especially if Mal lost his job. Did that money go to help support Sophie and her mom?

God. He felt like the world’s biggest jerk. Orange swore he’d find a way to repay Mal, if it was the last thing he did.

Mal gauged him for a couple of seconds. “Last night, you played me.”

“I hated it. You might not believe me, but it’s a survival skill.” Orange debated on pleading for his life, but he knew his actions would eventually catch up to him. Mal was no longer a faceless stranger. The werebear was real, here, and Orange did him wrong.

“Orange and Mal” is the second book in the Bad Boys Need Love Too series. This second story was very good! It starts with Orange on the outs with Mal. By the end they are back together. I liked that a lot. “Orange and Mal” also had a lot of humor in it as well. I had a laugh at Orange being Rusty&#039;s best friend and Mal being Saber&#039;s best friend. It keep it in the family and keeps the story lines light and enjoyable. It was fun seeing the whole crew back again. It was like meeting up with old friends. This book is worth reading again and that I look forward to the next book. I hope you will too.