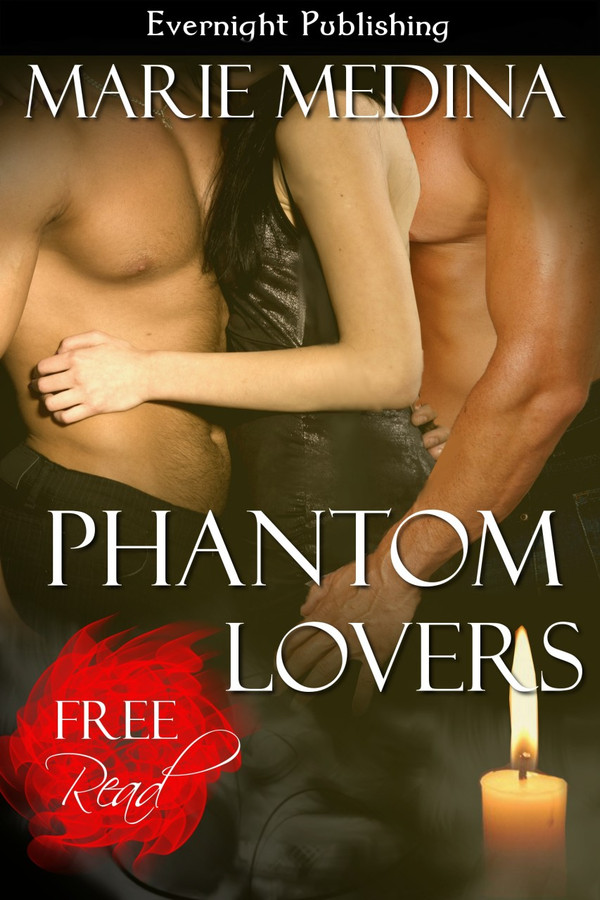 Lynsay never believed in ghosts and always nodded indulgently when the old timers in the theater tried to convince her otherwise. But two sexy ghosts have been watching her, and waiting. When they appear to her, she hesitates despite the desire that immediately burns in her veins. At first she wonders how she can trust the two mysterious men, but soon she convinces herself how foolish it would be to resist them. Yet even as she indulges in all the pleasures they offer her, she doesn’t confess her true feelings. She never imagined giving her heart to more than one man in the first place, so how can she give it to two men who aren’t even alive?

Lynsay looked into John’s eyes as William watched. She reached over and touched his cheek, and he gripped her hand and brought it to his lips. “The past is the past,” John said. “We’re thinking of now.” He kissed his way over her wrist and up her arm.

When their lips met, William joined them, standing on the other side of her and putting his arms around both of them.

“After hearing you say you wanted two men to make love to you at the same time, William had to hold me back to keep me from touching you,” John said after their lips parted.

“I would have gotten over Brian much quicker if you had,” she said, leaning into John.

She turned to look into his eyes. “John said it was high time you two ‘came courting,’ didn’t he?”

William nodded, wanting to taste her lips again as he watched John nuzzle her neck.

“Then court me,” she said, flicking her eyes between him and John.

Lynsay smiled and looked back at William. “Does he?”

William laughed. “I would say so. After two weeks of working together, he pulled me into an empty room and stuck his tongue down my throat while his hand found its way down my pants.”

Her mouth popped open, but she didn’t say anything. She closed it, but then she ran her tongue over her lower lip. “Did he? Did you like that?”

John stood just as William began to speak. “You bet he did,” John said, pulling William into his arms. John drew William’s lower lip between his teeth and sucked, sending a pulse of desire down to his groin. William closed his eyes and gave in to him, letting John kiss him and hold him. He felt John’s cock harden as their bodies touched. When John broke the kiss and began nibbling at his neck, William looked at Lynsay.

Her gaze was fixed on them as they embraced, her breathing shallow and her look hungry.

“He’s amazing,” William whispered as he stared into her entrancing eyes. “His mouth does the most wicked things.”

She swallowed and kept watching for a few moments, but then she looked away. William gave John a little shake and pulled out of his arms.

“All jokes aside, is that what you want? You want to be wooed?” William asked.

“Then we’ll leave you for now, so you can think,” William said. He turned to John. “Right?”

He could feel that John didn’t want to leave, but after a brief glance at him, John looked at her and nodded with a smile. “Yes. We will. I don’t know what I’d do without him.” He looked up at the ceiling and laughed before looking between the two of them. “Probably earn myself quite a hard slap.”

To William’s relief, Lynsay laughed as well. “Maybe. Maybe not. How about we see each other tomorrow?”

Both men nodded, and William grabbed John’s hand, making them both disappear before John could say or do anything else.

I have to say that I have read this story 8 times in the last 48 hours and it never gets old. This is a really good story. I would love to read more by this author

A non-believer of the numerous stories about the theater ghosts, Lynsay thinks someone is playing a prank on her when she hears moaning (not the ghostly kind). Then objects around her start moving, she hears the voice of men very close to her, she feels their hot breath on her face, and then they appear before her – John and William. They&#039;ve been watching her for a long time. Watching and wanting. They know her most secret fantasy because they&#039;d overheard her telling her then boyfriend. Now she&#039;s free and they&#039;re ready to make their move. She&#039;s not opposed, but she wants to be wooed first. And so the courting begins. They spend the next month getting to know each other better. Their feelings have grown beyond friendship and just sex, but Lynsay is afraid to lose something she can&#039;t have – both men in the flesh. However, there are three conditions that must be met simultaneously for them to have their HEA. Will they succeed? This was short and very hot! With most novellas I&#039;d say it could have been longer or expanded, but this was satisfying in its length and content. I enjoyed this, so I would check out more of this author&#039;s work.

The Dragon's Lover by Marie Medina