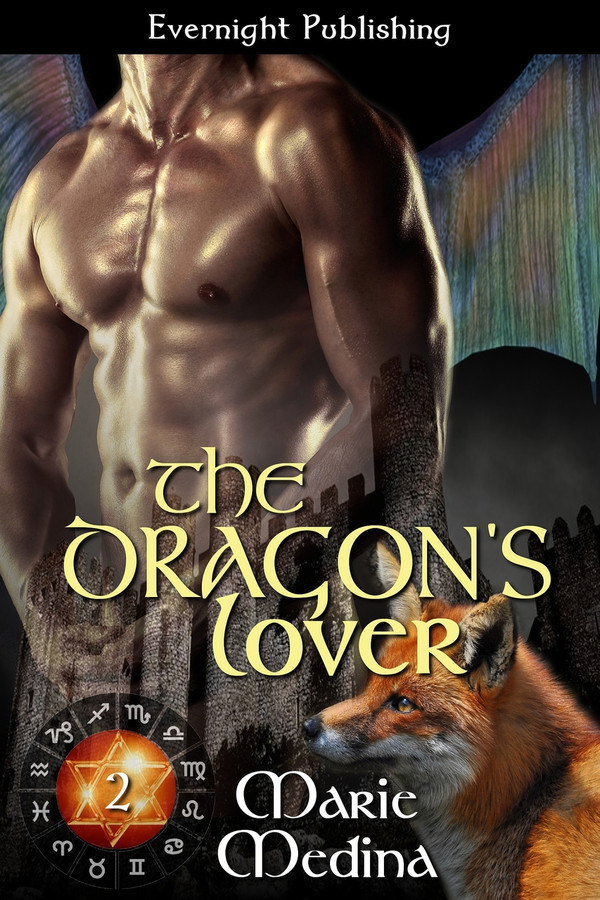 The Year of Stars, 2

Ryu, a dragon shifter and vampire, has found his mate, a man he already has strong feelings for, but he knows his confession is going to take Takumi, a fox shifter, by surprise. In a few days time, Takumi will be taking holy vows, and Ryu and his brother set out to stop him from doing so. But when they arrive, they find the temple in an uproar because the leader of the order has been kidnapped by a demon.

Takumi is distraught because of the abduction of his mentor, Mikimo, and seeing his good friend Ryu gives him great comfort. Takumi had long ago given up hope of anything happening between him and the powerful vampire, so Ryu’s revelation leaves him shocked and confused. As they search for Mikimo, Takumi consents to become Ryu’s lover, but he remains reluctant to acknowledge their matehood. As they fight side-by-side, will Takumi open his heart and accept the love the gods have ordained for him, or will he hold back because he’s afraid of being hurt?

Ryu’s emotions had become so muddled he didn’t comprehend Takumi’s question at first. “What?”

“Can you fly? As a dragon, do you have wings?” Takumi asked, looking so hopeful.

Hatori began wringing his hands and pacing. Takumi went to him and made him stand still. “We’ll find him, Hatori.”

“The gods won’t let him be harmed,” Hatori said in a whisper. “They can’t.” He bit out those last words. His eyes turned anxiously to where Kyo stood below, feverishly writing on a scroll. Ryu could see the normally mild-mannered Hatori getting more and more worked up, even though he seemed to be trying very hard to hide it.

Takumi turned worried eyes to Ryu, and Ryu longed to hold the younger man and comfort him. If only he’d come sooner, Ryu could support Takumi more fully in this moment of crisis. Ryu briefly felt jealous when Kyo dashed back up the steps and went straight to Hatori, taking his hands and kissing him to offer reassurance.

“I must tell them I am leaving, but we can do that on the way out. We can also find out where others have not yet ventured,” Takumi said.

They all nodded, and Kyo and Hatori went down the steps, hand in hand. Ryu turned to follow, halting when he felt Takumi taking his hand. He looked down at Takumi as he wondered if he’d been letting his feelings show too blatantly in his looks. The intimate touch made him very happy, if only for a fleeting moment.

“I wish the circumstances were different, but I am glad you are here.” Takumi pulled him along. “You are a true friend, my lord. I almost feel like I’ve known you as long as I’ve known Hatori and Mikimo.”

Ryu had never before felt queasy when hearing the word friend, but now he did. “I feel the same way, as if I’ve known you for years. I am glad to be here when you are in need.”

“I tried to be strong in front of Hatori,” Takumi said in a lower voice. “But I’m very scared.”

“I’ll do everything in my power to help. We all will.”

Ryu didn’t want to let go when Takumi pulled away, but he had to. Ryu had seen enough of the destruction demons left in their wake to know they couldn’t waste time. Mikimo was a model priest who acted selflessly in all things. He did not deserve this fate, and Ryu could not let Hatori and Takumi lose the man who had raised them so lovingly.

Although there were places where this book seemed to move more slowly than necessary, it was still enjoyable to fans of Ms. Medina&#039;s writings and the world she has built here. Even if this were to be the first of her books read, there is enough background information given to keep the reader from being lost. Especially enjoyable is the way that the fated mates in this novella shared a common tragic childhood and both seemed to share traits such as being unable to see in their own pairing what they could see easily in others. The overall arc of the story is satisfying and the epilogue sets up nicely for the next book in the series.