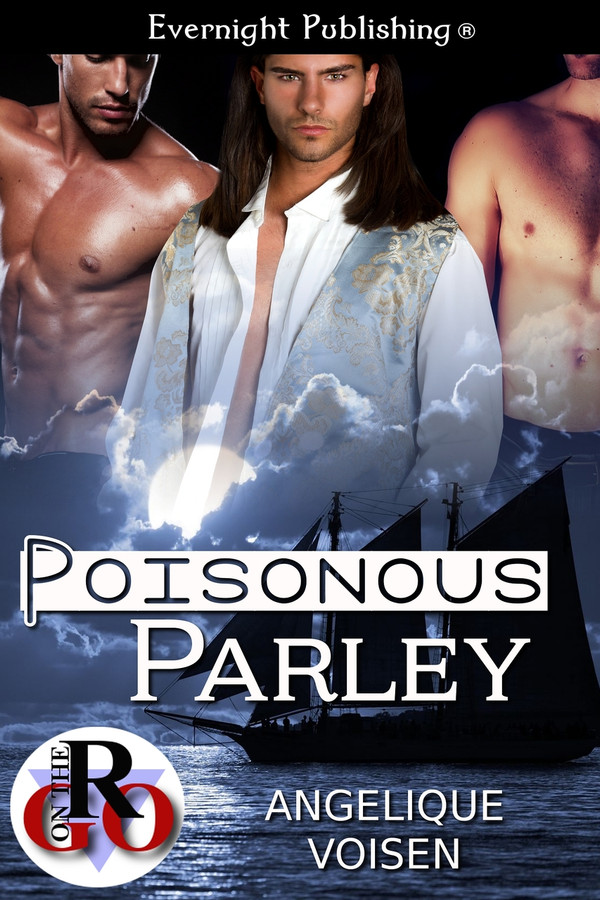 The last thing Lord Adriel Claremont expects is being kidnapped by Dabnis, the most vicious pirate in the Domo Empire. It’s up to his well-paid werewolf bodyguard to track him down, but Adriel suspects Lionel would rather see him sold off to slavery or get eaten by sharks.

Lionel didn’t devote his entire life to be part of an elite brotherhood of werewolf mercenaries to baby sit a spoiled lord. Only profit moves him, but when Adriel goes missing, Lionel doesn’t understand why he’d do whatever it takes to retrieve his employer.

Dabnis agrees to a parley. He’ll let Adriel go if the two men offer themselves up for his pleasure for a single night. While the pirate’s offer sounds simple enough, both men are terrified that one night could lead them to poisonous waters they aren’t ready to breach.

“For a night we’re not lords, pirates or werewolves. Just three men moved by desire.”

Those simple words opened a door inside him he didn’t think existed, and the possibilities of what could happen that evening made him dizzy with excitement. If this was what freedom tasted like, if this was what living in a world without rules felt like, Adriel was terrified he’d never want to go back to his old one.

Who’d want to return to a world made of deceit, frigid smiles and ill intent, when one could be free of all of it?

“Awfully silent aren’t you, Lord Claremont? Probably fantasizing how your lips would feel so right around my cock and your wolf’s prick buried in your ass?” Dabnis smirked when a furious blush began to spread across his face.

He practically panted at the sight of Lionel’s copper skin and the hard muscles he’d imagined running his fingers across. Old scars trailed the werewolf’s skin, scars Adriel could imagine running his tongue over and over again just to taste the contrast between the unmarred skin of his flesh and the imperfect areas. He didn’t just want a collision of flesh and bodies. Adriel wanted to know every intimate inch of his werewolf.

While Lionel was padded with muscles, the werewolf was also trim and leanly built. Dabnis meanwhile was a bull of a man with wide shoulders, a broad and hairy chest and thick arms and legs. The sight of his sun-kissed skin sent another ripple of unexpected desire through him.

To have these two gorgeous men want him was something he’d never imagined. To be wanted this badly merely for being himself and not because of his family’s influence or money was a foreign concept to him. This was nothing like a mere peck on the cheek, or the gentle touches on the arm Adriel used on Lillian or any of the ladies he wooed. Looking at the primal and feral lust in the eyes of the men who wanted to devour him, Adriel knew there was nothing gentle in what was about to happen and it excited him. He strained vainly against his ropes, finally getting the attention of the two men.

“Lionel, looks like our little lord is getting impatient.”

The pirate towered over him and Adriel’s gaze moved down from his scarred face, his delicious tattooed chest, and finally rested on his enormous cock. He swallowed. Every fiber of his being screeched with need and it was past time for playing games.

“Looks like he wants your cock, Dabnis,” Lionel said bluntly, his eyes fastened on Adriel. “Come on.  Beg him for it, Adriel.”

Damn. Adriel nearly came at the harsh authority in the wolf’s voice.

Instead, he fidgeted in his seat and after a moment said, “Please.”

“Please what? If you don’t speak up man, you aren’t getting any. So tell us what you want,” Dabnis reprimanded.

‘Poisonous Parley” has everything a good pirate fantasy should contain: hot men, an edge of danger, and a definite whiff of the forbidden. The fact that it’s three men involved in somewhat unexpected activities makes what they get up to even hotter, never mind how unrealistic the whole story may feel. That’s not the point, and since everything is set in the mysterious “Domo Empire”, aka some wild and untamed 19th century unexplored territories, it’s all good as far as I am concerned. Lord Adriel is spoilt, rich, and has just been dumped by his bride. Not exactly the picture of manliness, but he has an inner fire that comes out when he is challenged that definitely makes him a spitfire. He also has secret longings, but needs a push to be able to admit what he really wants. And it isn’t the return of his bride! Lionel is a werewolf mercenary (which I’d love to find out more about!) and currently serves as Adriel’s bodyguard. I found the whole idea hilarious, but Lionel is not amused. He didn’t train hard for years only to be “used” in such a way. And worse than that, he may behave as if he despises Adriel, but deep down he and his inner wolf have decided they want him. Dabnis is a hardened pirate, but as it turns out, he has an eye for the finer things in life. He may have intended to kidnap Adriel for ransom, but once he has him on his ship, he changes his mind. The fact that the “little lord” has a hot werewolf bodyguard only makes things more interesting for Dabnis. With the sneaky cleverness of an experienced pirate of the high seas, he comes up with a plan that will solve everyone’s issues. If you like your threesomes on the wilder side, if a little bondage and kink between men ho are about to engage in unrestrained “lustful acts” are your thing, and if you’re looking for an entertaining read that is as hot as it is fantastical, then you might like this short story