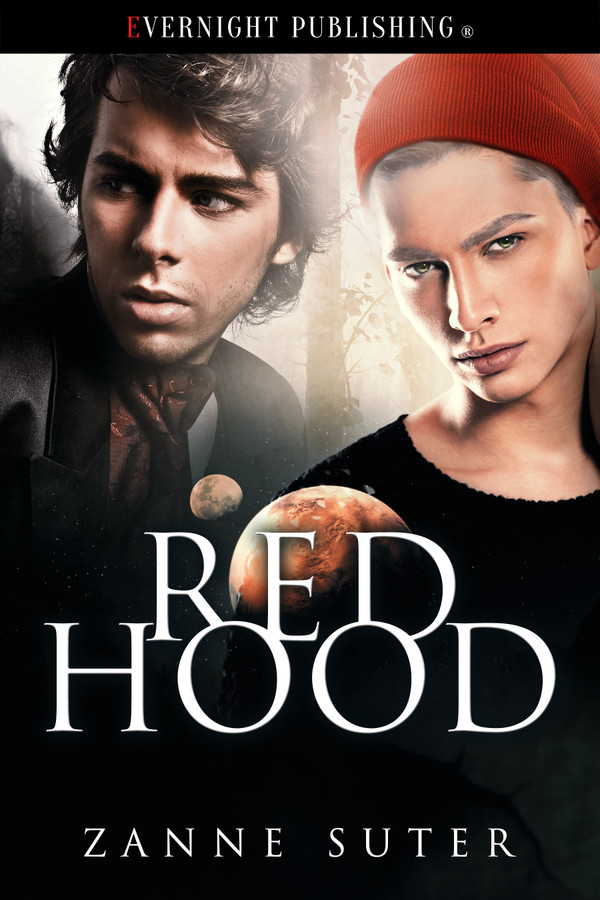 The only rule is to be home before dark.

As a Red Hood, Janson was raised with this warning, since male pleasure workers are often the chosen prey of the creature that hunts the nighttime streets. When a former bart grants Janson an apprenticeship, he has a chance to escape the dangers of being a Hood. There, he meets Owein, a charming young man with secrets of his own.

On the night Janson is forced to brave the dark to save his sister, he finds the creature that has been terrifying the community for so long. Instead of certain death, the creature woos Janson with gifts, protecting him when those from the everyday world become aggressive. Janson never expected to have one suitor, much less two. They both have their flaws, but which one will have his back when he becomes the hunted?

His eyes met Janson’s across the room, and the gaze held instead of flitting away within a second as it usually did. Janson felt a thrill of heat run through him as their eyes remained locked. This might be the time that Owein took what he wanted. Janson might finally learn how Owein fit into his world, and how he fit into Owein’s.

Then Owein’s gaze dipped back down to his lap, or perhaps to the piles of papers still littering the floor at his feet. Janson could not tell where exactly Owein diverted his gaze, just that it was no longer on him, leaving him feeling bare, as if he had been assessed and discarded as unworthy with only a glance. He momentarily felt embarrassed for the arousal that simmered within at just a glance from the man across the room from him and wondered in silent surprise at what point his own arousal became something of consequence.

Janson was not ashamed of wanting something, someone, for himself after so long serving others. This want felt new and different, untainted by whatever it was that was going on between him and his Creature. There was want there, too, but it left Janson feeling an entirely different sense of elation than thoughts of Owein did. Yes, his Creature treated him as something special and sacred, but it was colored by the more animal nature of man and beast Janson had made a business of for so many years.

Owein was something he wanted, and Janson needed to take a stand, to find out where he stood rather than keep hovering on the edges of possibility. The potential of this thing between him and Owein kept him going when the brusqueness of the other barts wore him down, when Atticus’s or Meister’s demands became too cumbersome, or even when his Creature’s wants seemed a burden too great to bear alone. It was time to become like those wise men of the old stories, who turned possibility into reality with a twist of the wrist or a well-sung turn of phrase.

Janson rose silently to his feet, moving across the room with a stealth inherent to those who lived in the Hinterlands. Owein looked up only when Janson’s shadow fell over him, his pupils widening in surprise when he saw Janson looming large in his view. Janson felt strangely powerful, standing so dominant over Owein who still sat slumped in the meister’s large chair, a mix of aroused confusion stamped upon his face. Janson took advantage of Owein’s position, pointedly straddling his thighs and taking his time to settle himself on Owein’s lap. He made sure to grind down with precision as he arranged himself more comfortably, noting the shaky bob of Owein’s Adam’s apple when he swallowed, and the hard length beneath his ass, indicating Owein’s mind regarding this relatively new state of affairs.

Owein’s mouth fell open slightly, his breath quickening into pants as his hands clutched harder at the arms of the chair. Not one to miss a chance so readily given, Janson leaned forward and pressed his lips to Owein’s, breathing in Owein’s startled huff before diving in for the full effect. He planted his hands on Owein’s chest, pressing his sternum tightly against Owein’s as he hummed with pleasure into Owein’s mouth, teasing at Owein’s tongue with his own. Even as he began to writhe in Owein’s lap, he rubbed his thumbs over Owein’s nipples where they had come out of hiding beneath Owein’s shirt, hard little pebbles pushing against the silken fabric.

Janson did not want to pull back, but he felt his lungs burning, too lost in the kiss to have taken a full breath. He allowed their lips to separate, their breath mingling between them, and Janson was sure he could feel Owein insinuating himself into each cell of his body with Janson’s every inhale. Owein blinked at him, eyes dilated with arousal, and all confusion washed away by a flood of desire, though the words that followed still held that tremulous question.

“Since you would not make the first move, it fell to me,” Janson said, his breath coming faster. “Are you doubting my intentions now?”

Owein shook his head weakly and his mouth fell open, undoubtedly to reassure Janson he did not need to do this, that Owein did not require to have him like this, like so many others had through no will of Janson’s own. Janson did not want Owein’s need to be unlike every other man in Janson’s life to come between them, to keep Janson from getting what he wanted after all this time.

So Janson dove in once more, determined to wipe every bit of doubt from whatever fell next from Owein’s lips.

Red in the Hood by Lee Ann Sontheimer Murphy