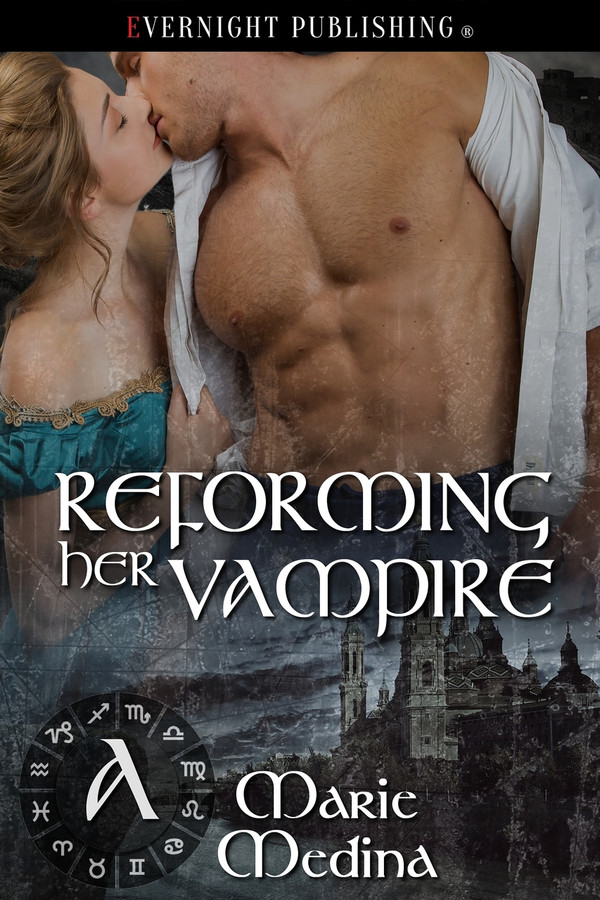 Sean arrived at a wedding thinking he might find someone to warm his bed, if he was lucky. He didn’t expect to find his fated mate, and he certainly didn’t expect her to be his friend Erik’s eighteen-year-old ward. He’s never worried about attracting a lover before, but a mate is very different, especially one as lovely and seemingly innocent as Iris.

Iris can’t help feeling stunned when Sean—the vampire who wears too much cologne and flirts with everyone—tells her she’s his fated mate. Even though he’s handsome, she’s never been able to take him seriously. But as he takes her hand and pleads with her to give him a chance, she starts to see a completely different man behind the façade he always wears. Though she’s not sure it can work, the look in his eyes compels her to explore what might be between them.

As the rings were exchanged, Iris scanned the crowd once more. Everyone smiled, and some whispered to others close by, but one person seemed out of place. Lord Sean stared at her, looking decidedly glum. When she locked gazes with him, he seemed to realize he was staring. He shifted in his seat and looked toward the bride and groom. Iris did a quick check of her dress and flowers to make sure nothing was out of place. Her bodice was cinched a bit tight, but she had become a lot curvier the past year. She tried to keep her eyes from going wide as she wondered if Sean had been staring at her cleavage, which was on display just above the flowers she held at her waist. Of course he’d be one to notice. Sean had actually had an affair with one of Erik’s brother, which had been awkward when Jensen had found his fated mate. She’d heard Sean had avoided coming around for a while after that, but everything seemed smoothed over these days. He came to the castle at least three times a year, often far more.

When Iris lifted her gaze after raising her bouquet just a little, she found Sean staring at her again. She decided to ignore him and focus on Heather. The vampire was handsome, but he wore too much cologne and tried too hard to be charming. Iris wouldn’t deny having admired his face and body before, but anything more was out of the question. Heather had remained a virgin out of timidity more than anything, but Iris had held on to her “virtue” because she wanted it to be a beautiful memory, even if it wasn’t with the man she one day married. She’d been feeling the desire for several years now, but even that longing hadn’t been enough to convince her to submit to the fumblings of someone who didn’t truly care for her, someone she didn’t have feelings for as well. However, someone like Sean would be quite skilled…

Stop thinking that! She tried to push away her more carnal thoughts as she listened to the priest talk about the beauty of this union and the blessings the gods would bestow. She thanked the gods she’d never been browbeaten and taught that sex was dirty, but she’d always known Erik and Lucas would be disappointed if any of the girls got pregnant before they married. And the poor boy’s life would likely be in danger to boot for getting her pregnant. She shifted the flowers in her hands, as her palms were starting to sweat a little. She didn’t regret her decision to stay chaste, but sadness washed over her as she wondered if she’d ever really find the kind of love Erik and Lucas had, the kind Heather and Adam seemed to have in their future. She wanted that even more than she wanted passion, yet she hoped she could find that with a lover as well.

Curiosity got the better of her, and she glanced in Sean’s direction again. This time, she met his gaze and held it, letting her lips curl up a little. It was a wedding, so smiling was certainly expected, wasn’t it? But he didn’t smile back, though he held her gaze. She waited for him to blink, starting to wonder if maybe something was wrong with him. Why was he paying so much attention to her? Last night when he’d arrived, he’d smiled and said a brief hello to her, nothing more, as he’d rushed past her to greet someone else who had arrived at the same time. If he was attracted to her, he’d certainly kept it hidden. They’d last seen him a month before at a festival, and he’d been charming and witty, but in a distant and flirtatious way. That was how he always was. He made small talk and complimented the girls and tried to make them all laugh and blush. He never really talked to them about anything of substance or tried to get to know them, except for indulging Violet’s wild stories and jokes.

Iris tore her gaze away. She refused to be seduced by someone who’d had dozens upon dozens of partners. She didn’t care what other people did, but she wouldn’t lower her own standards for anyone. It wasn’t the sex—it was the flippancy. Seduction and romance were two very different things, and Iris definitely wanted both, with the romance coming first. She didn’t mean to judge Sean or anyone else. She shifted her position on the dais. The wedding had her dwelling on the subject far too much. She’d spent the last week preoccupied with her own unattached status. What did it matter? She had a loving family and friends all around her.

If the gods wanted a man in her life for some reason, they’d send one along in their own good time.