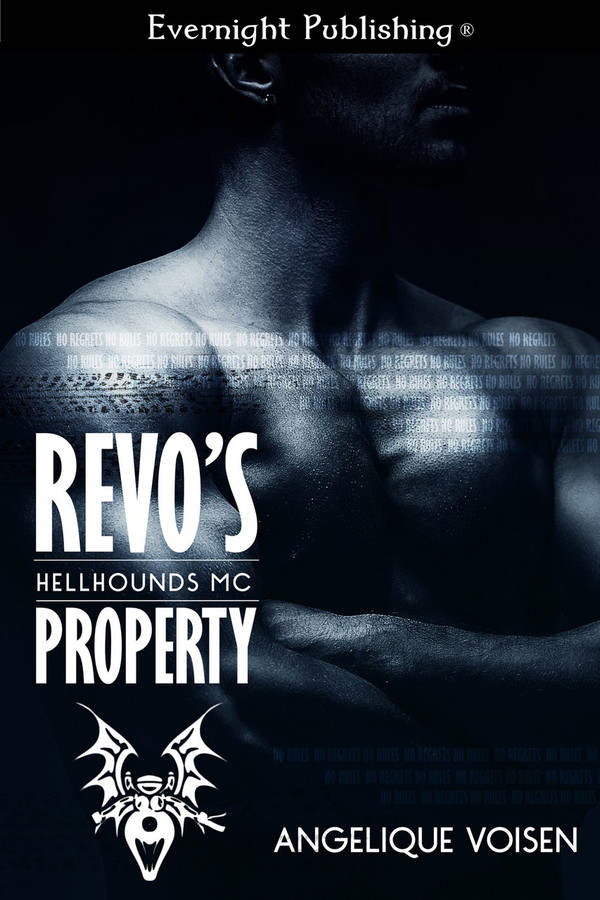 No rules. No regrets. Live without giving a fuck about yesterdays and tomorrows. That’s the motto of the Hellhounds MC.

Around Wolf County the werewolf riders are the law and they don’t take well to outsiders. When Revo, the club VP and pack beta, sniffs out an incubus feeding on the townsfolk, duty demands he get his hands dirty. But the last thing Revo’s wolf is interested in is shedding blood. The beast wants to mate Ezra and claim him, while Revo’s human half is certain bonding himself to a soulless being is a one-way ticket to hell.

Revo leaned in close. He ran the bridge of his crooked nose up the column of Ezra’s throat. His tongue flicked out, catching his beaded sweat, tasting the salt of his skin. Every little thing he did sent jolts of electricity right to Ezra’s chest and groin. Fuck. Ezra squirmed, wanting to go fast, but Revo pinned both his hands above his head. He groaned.

Revo nipped at his left earlobe, wrangling a moan from him. His breath was warm against Ezra’s neck. “I’m the one in control here, is that clear?”

“Crystal.” Dominant werewolves and their damn obsession with control, but Ezra didn’t mind. Hell, he liked being submissive in the bedroom, but he would keep his guard up. Ezra wouldn’t just let some random stranger lead him to dark places without making sure he could back out anytime he wanted. Trusting anyone in Pre-Fall times equated to suicide.

Ezra lost his train of thoughts when Revo did something no one had ever done before. The unexpected. He mashed his lips with his. All tongue and teeth and no finesse, grinding his body against his. Ezra froze as the fierce and sharp taste of Revo flooded into his mouth.

Pre-Fall and Post-Fall, no one kissed an incubus on the mouth. Most men and women were only interested in his body and Ezra finally understood why. There was something terribly intimate about the gesture, a danger of being undone. Ezra responded, opening his mouth wider to let Revo’s prodding tongue in.

Revo released his lips. Ezra panted, eyes wide. His heart beat so loudly against his chest he knew Revo could hear it. Keeping Ezra’s hands restrained with one hand, Revo used his other to furiously unbuckle his belt.

The word “please” did the trick. Revo paused, looking annoyed. “What the fuck, did you change your mind? I gave you a choice and there’s no turning back. Once I start, I won’t stop.”

“No. I understand. Believe me, the last thing I want to do is stop. It’s just—can I ask why you did that? Kiss me?”

Ezra swallowed. The last thing he wanted was to spoil the mood.

“Fuck. You want to have a bloody heart-to-heart talk? Spare me.” Revo growled.

His words prickled at Ezra. “If this is how you treat all your boyfriends and lovers, I’m not surprised you’re still single, wolf.”

Ezra cringed the moment his words spilled out without thinking. Revo’s grip on his arms loosened. Revo disarmed him with a toothy grin. “Boyfriends? Don’t know the word. I don’t do shit like relationships. I see what I want. Take what I want.”

The hiss of his leather belt slid from his belt loops. Ezra squirmed. “Then why did you kiss me?”

“I want to taste all of you, the whole package.”

I can&#039;t imagine anything sexier than shifters and bikers. Yum. So, when I discovered this series by Angelique Voisen, naturally I was curious. Throw an incubus in the mix, a little mystery and suspense, some smoking hot sex, and, well, in my mind that makes for a fun and scintillating read. I get such fun out of seeing the different types of world building authors do. The &#039;Hellhounds MC&#039; is a post-apocalyptic world where shifters, immortals, and all kinds of creatures that go bump in the night are, for lack of a better term, out and proud. Ezra has ventured into Wolf County to find his twin, Echo, and repair whatever damage his sibling has managed to inflict. Everybody knows this isn&#039;t the place to mess around, as the law comes in the form of a werewolf biker gang that rules with an iron fist. Ezra is the one who has kept himself and Echo alive, Pre-Fall and Post-Fall, by not making waves and only feeding in small sips, here and there. Unfortunately for Ezra, Echo decided that wasn&#039;t enough and has gone on a feeding frenzy, leaving Ezra to be captured by Revo and accused of the deaths. Revo knows Ezra is his mate, and in order to protect him from the club, he claims Ezra as his in front of them all. However, the very next day Echo strikes again, and Revo leaves Ezra to go and capture Echo to make him pay for his crimes. Well, Ezra can&#039;t just stand around while his twin, his only family, is killed. A good beginning to what I believe is going to be a hot and intriguing series. I definitely would love to know more about the apocalypse that occurred, and the world before and after. Revo and Ezra both got what they wanted, and I&#039;m interested in reading book two.

This was a short paranormal Sci-fi story with complex characters and a world I want to know more about. Revo is the beta of his town and VP of the MC, he knows what he wants and how to get it. Ezra is a drifter in more ways than one, while trying to find his twin brother he gets more than he bargained for. Revo is mated to Ezra and must make his pack understand that his decision is Final…. I enjoyed this book because even with how short it was it gives the reader a well developed world. A world you want to know more about and the characters. The sexual scenes are hot and definitely give you what you want in this romance on the go. I give this book 3 diamonds and hope that the series develops into a great and unique universe…

Ezra hadn&#039;t really wanted to go into Wolf County, but the reality was he didn&#039;t have a choice. He&#039;d heard the stories about what the Hellhounds MC would do to people who broke the law in their territory, but with a car due to break down any minute, and a decided lack of energy he had to take his luck where he could find it. With any luck he would also find out what had happened to his twin, Echo. It seemed Echo had been stirring the type of trouble that only an incubus could. When Ezra gets a lead on him, he puts in Revo&#039;s path. &quot;A piece of walking man candy with the soul of a monster.&quot; This is an unusual world set after the apocalypse. Laws are brutal, the land is harsh and electricity is a luxury rather than an accepted part of life. Revo knows he is supposed to kill Ezra but can&#039;t do it so he makes him a possession instead. Even though Ezra is Revo&#039;s mate. I did wonder as I read this book, that if there was an apocalypse would we all be reduced to thinking of nothing more than sex, food and violence. In this story it definitely seems that is all that the Hellhounds can think of and the casual way they use the club whores made me wince more than once. But for those of you who don&#039;t like it, believe me there is no cheating in this story - surprising, but true. But it definitely made me wonder, especially in light of Revo&#039;s behavior with Ezra. When Echo causes even more trouble in town, Revo is ordered by his Alpha, Mace, to deal with it. What Echo has done should result in his death, but at least it gets Ezra off the hook. There are a lot of little twists in this short story that were more than interesting, and while it was only short, I for one will be looking forward to the next one.