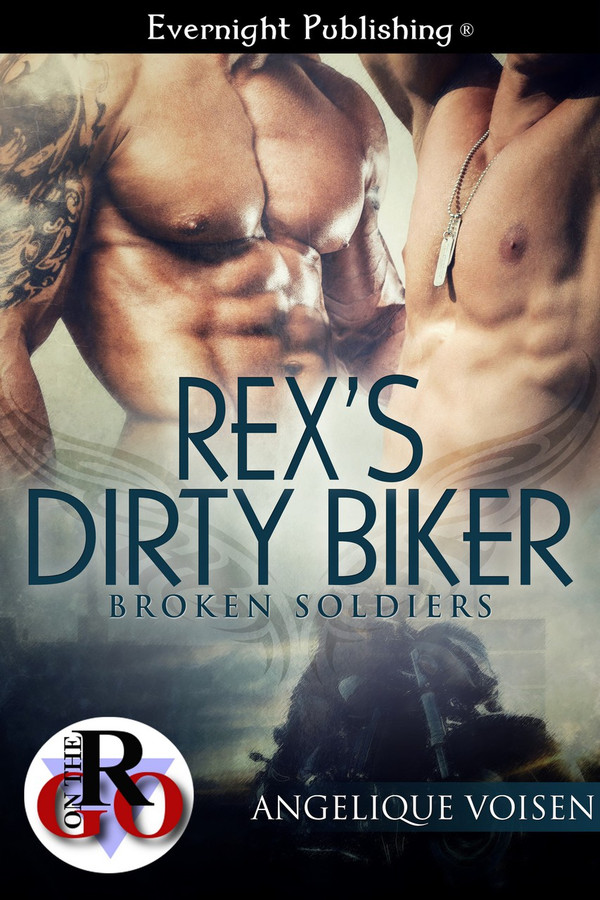 Thrust into the middle of a war zone with his unit, Rex Chambers desperately clung to one sweet dream to survive—a life with his woman. A single bullet to the spine landed Rex back home, crippled, damaged, and in need of fixing. But all that’s waiting for Rex is an empty house, a hasty good-bye, shattered dreams, and a dirty-mouthed biker.

The former member of a MC, Jensen “Riddle” Matthews has ridden through hard roads and made bad choices. Learning his little sister bailed out on Rex, Riddle steps in, knowing Rex’s on the verge of falling apart. Riddle has always held a torch for Rex, but can the spark between them be enough to save a broken soldier?

If Rex had trouble reconnecting with the world, then I had to forcefully remind him of life. Melt all that numbness away and replace it with something else.

His eyes narrowed when I leaned over. I chuckled. He was wary and watchful like a predator.

“What, you think a little kiss is going to make things better?” he said.

He seemed confused, and I took advantage. I wrapped my hands around his waist and lifted him from the chair. Rex had packed on a couple of extra pounds, all of it hard muscle, but it didn’t matter. Ignoring the curses he flung at me, I lowered him to the couch, so his legs dangled over the edge.

“Jesus, Riddle.” Rex grunted, but he didn’t push me away. He twined his fingers into my hair, reeling me in close. Hesitation must have crept in, a momentary weakness, because he said, “wait, we shouldn’t.”

His resistance had been reduced to one paper-thin barrier, and I knew I’d won. He wanted this so much, but kept himself back. Whatever arrangement we had—too early to call it a relationship, or anything else, it may be nothing more than random fucking. Something birthed out of desperation and need, but if it pulled Rex to reality, then what did it matter?

“Let me take care of you, baby,” I whispered, ignoring the sharp tug he gave my hair. Looking up at him, I watched the bead of sweat roll down the chords of his throat, before pinning his gaze with mine.

While this is a short story it deals with a lot more than a romance. It deals with the reality that plagues many of our veterans no matter what war they fought in. Rex is in the middle of a war zone praying to stay alive and holding out hope for his HEA, like in life nothing goes as planned and Rex is left alone holding the pieces of his dream. Riddle is the man that helps Rex pick up the pieces even if Rex doesn’t want him to, Riddle knows that Rex is broken but he will do everything in his power to make him whole again. I will say that love is complicated and comes in different forms and one should never walk away from it because it doesn’t fit your ideal dream. I give this book 4 diamonds and will be reading book 1 asap… These characters gave me a raw and honest love, with a story that many of my friends have known. It felt personal and it provided insight to the struggles that our men and women in service go through when the unexpected happens.

Two no-nonsense kinda guys. One ex-military, the other ex-MC. One back home from deployment; broken in all the senses of the word. The other waiting for him; to claim him forever. Nothing&#039;s easy with men like these. And that&#039;s half the fun ;) It&#039;ll take time and effort and loads of smocking hot sex to get to a safe place where both want to be, need to be with each other. Forever. The beginning of their lives starts when this story ends.

Rex is a soldier, serving in the desert and dreaming of coming home to his love, Shelly, and their white picket fence dreams. All that is keeping him going is “a remembrance of home, to my shining promise.” It takes an ambush to make those dreams turn into that desert-like sand. He returns home, after months of surgeries and therapy, in a wheelchair with his beloved Shelly not having visited him once and never returning phone calls. When his friend , Rider (also a broken solider) , brings him to the house he shared with Shelly, it is actually Shelly’s big brother, rough, tattooed biker, Riddle, who is there to let him know – baby sister Shelly pulled the worst thing you can do and she bailed. I hated her and she’s never even present in the story. Riddle is a little crude, a lot rough and a whole lot awesome. He knows what his sister did was unforgiveable, “I tried. Told her not to leave, knowing what it would do to you, but she didn’t listen.” What Riddle does is pick up the pieces. He’s going to wait for Rex to ask for help and in the meantime, he’s going to help and be there for him. He puts up with a lot from Rex but he is the one light that Rex has, even if he takes it for granted while he’s trying to heal inside. Rex is able to maintain erections and have sex just fine (luckily!) and he has a loyal, if a bit rough, ally in Riddle. These two don’t have the fluffy, sappy type of relationship, they have something better. Something real. The huge burning question I had was – what happened with Shelly afterwards? Riddle himself says when he left to ride with his MC brothers he disconnected from all his family except her. Do they ever see her? Do they make amends (at this point, I hope not!) This is a romantic story regardless of the sniping they do with each other and I enjoyed it.