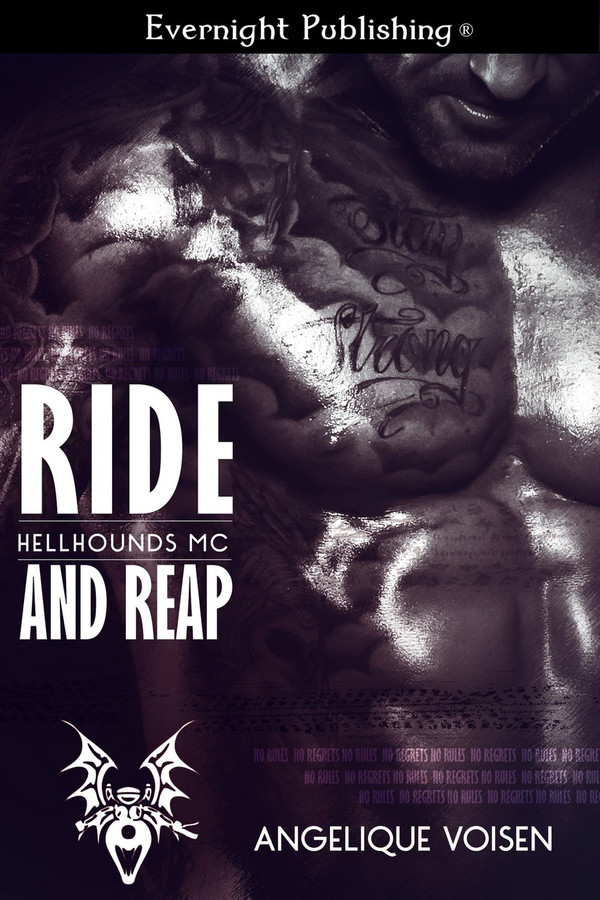 Reaper’s no stranger to dirty deeds. Before being patched into the Hellhounds MC, Reaper’s earned his nickname being someone else’s dog. Some call him bad to the bone, a monster who never sought redemption…until an old vengeful ghost resurfaces.

To end his brother’s killer, Kane O’ Connor took the hard road. He let his thirst for revenge satiate him, but something inside Kane broke the day his blade kissed Reaper’s throat. Hate and desire become blurred, and Kane’s beginning to doubt everything—himself, Reaper, and the future. Could anything good come from something so bad?

“I don’t belong to anyone, least of all you,” Kane whispered, voice gaining heat.

“Not yet, but you want it.” Reaper sniffed the side of Kane’s neck, flicking his tongue at the beaded sweat there. He licked his lips, savoring the salt of Kane’s skin, and Kane’s distinctive heady scent that all but screamed mine. Kane opened his mouth, ready to unleash his denial, but Reaper pressed a finger on his lips. “Lie to me again, and you’ll earn yourself a punishment you’d come to regret.”

Kane let out a mirthless laugh. “What are you doing to do? Kill me?”

His expression faltered, turned to hesitation at Reaper’s look.

“Who ever said anything about killing you?” Reaper asked.

“What use am I to you alive?” Kane dragged his feet off the arm of the couch and attempted to rise, but Reaper pressed him back to the seat.

A door closed, and Reaper knew Revo and Ezra silently left them to their devices. Reaper would thank them for the privacy later.

“Plenty. There’s no one else but us now, Kane. Stop fucking around. Are you really going to tell me there’s nothing between us?” Reaper knelt between Kane’s legs. It seemed all thoughts of leaving fled the human’s mind. Kane stared at him, dumbfounded. Reaper ran a hand up Kane’s left calf, tracing lazy circles up his knee, his inner thigh.

“Answer the question, Kane,” Reaper said, eyes hard. He used the tone Kane seemed to respond to the best.

“I can’t. What would Kevin think of me, that instead of avenging him, I’d fuck his killer?”

Reaper growled, making Kane jump. Rubbing at his thigh again calmed him down, but Kane’s eyes remained wild, like an animal seeking escape, but he could have shoved Reaper away any time. Easy to read like a book, Reaper knew Kane hated the fact his body betrayed his needs.

“Stop making fucking excuses. We both know that’s a weak excuse now that you know the truth, or does that turn you on? The thought of the forbidden?”

Glowering, Kane’s hands trembled, as if he wasn’t sure what to do with them. He settled for crossing them over his chest. “Cocky bastard.”

“Tell me I’m wrong, that I’m imaging things, and I’ll fuck off. We’ll do this clean. Deal with Harvey. Part ways. End of story.”

I was waiting for Reaper&#039;s story. As Sweet&#039;s brother, Reaper is the quieter, and less impulsive one. He&#039;s also the guy with the biggest regrets and heartache buried in his past. I was really wanting him to find what he needed to be happy. Who knew he would find a would-be assassin? Kane has spent years tracking Reaper down. All the information Kane has indicates that Reaper killed his brother. Unfortunately, the piece he&#039;s missing is that Reaper did end Kevin&#039;s life, but it was a mercy killing against the flesh traders who had him. When Kane tracks Reaper down in Wolf County, something holds him back, and that&#039;s when Reaper has got him. Kane is more than a little pissed when he finds out his &quot;mentor&quot; double-crossed him, but he&#039;s more confused when Reaper tells him that they&#039;re mates. I do enjoy these action-packed endings that continue to bring me mental images of &#039;Mad Max&#039; movies. Kane and Reaper did a great job slaying that old, bigoted hunter, and hopefully there&#039;ll be no more to fear from that camp. Another sexy, hot installment that I liked. Thank you, Angelique!

Another great addition to the series I came to love... I think the plot in this book is much more tighter than in the previous ones, there was a little bit of insta-love going, but I didn&#039;t mind it, because I truly felt the strong connection between MCs. I have a soft spot for Revo&amp;Ezra from the first book, but this couple actually came pretty close in terms of how much I liked seeing them together. And what I like the most is that, although there are similarities between Revo, Mace, Sweet and Reaper, every single one of them has a different backstory that shaped them into who they are and I never had a problem differentiating one from another,which is to say that the way MCs and stories are written isn&#039;t repetitive,in my opinion. The same applies to their mates... There were couple of super-exciting scenes,and during one of them I actually wondered is everything going to turn out as it&#039;s supposed to. Which is a feat in itself, because I don&#039;t get surprised or excited very easily these days. And although this book is about his brother, I&#039;m finally starting to warm up towards the Sweet.