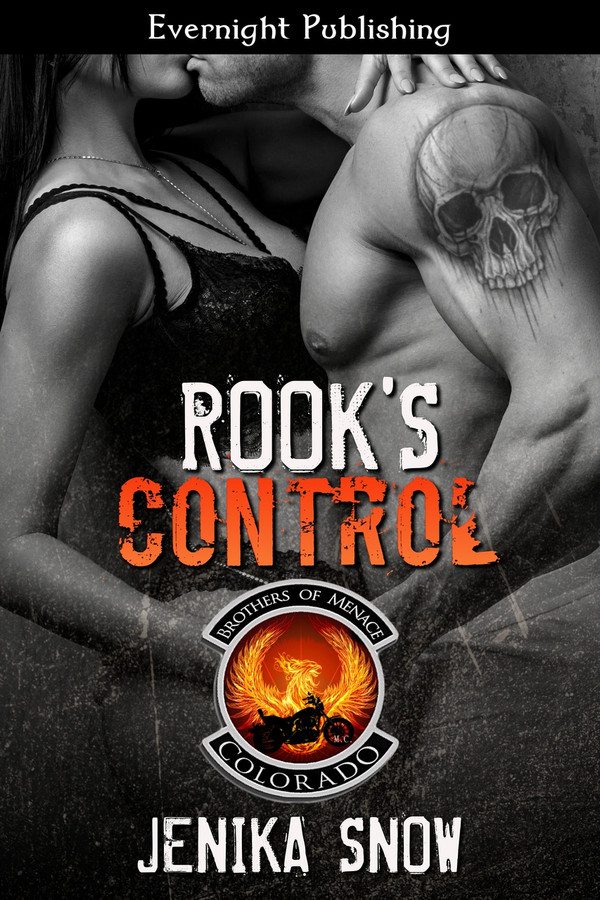 The Brothers of Menace MC, 7

Bobbie used to be a sweet-butt, and then she fell for a Patch. But telling Rook she’s in love with him is easier said than done. She fears he doesn't want her as anything more than a piece of submissive tail.

Rook doesn't hide the fact he's a dominant man. He likes certain things when he's with a woman, things that leave marks on her body and have her calling him “Sir”. But ever since he's slept with Bobbie, she's all he wants. She’s far too good for the likes of him, so pushing her away seems like the right move.

When someone from Rook’s past comes to get even, Rook finally realizes how important Bobbie is to him. Can he get to her in time, or will he lose the only good and perfect thing he's ever had in his screwed up life?

She opened her eyes and saw him grab the belt that was lying beside her. Before she could think, he was bringing the belt down across her ass. She clenched her teeth, rose on her toes, squeezed her eyes shut, and absorbed the pain that came with the stinging rush of the belt on her flesh. Just as the pain faded and the pleasure took its place he spanked her again.

Rook did this until her flesh felt hot right before it numbed, and the endorphins went wild inside of her, sparking off her nerve endings, and causing her to use self control to not cry out.

“Who owns you?” he asked in a harsh, demanding, dominating tone.

He brought the belt down along the back of her thighs.

“You only belong to me. From this moment on you’re my woman, my old lady.” He tossed the belt aside, had his hand right on her pussy, and shoved a finger in her fast and hard. She opened her mouth on a soundless cry. “This pussy belongs to me.” He placed his fingers at her mouth, forcing her lips to open so she had to taste herself. “This mouth is mine.” He slid his hand down her chest and grabbed one of her breasts. He tweaked the nipple and leaned in so his warm breath teased her ear. “These tits are mine.” And then before she could even think he had those same fingers pressed right at the entrance of her ass.

Her mind and body were on fire, short-circuiting, and she realized having the love of a man, the same one she was head over heels for, made any experience even more intense.

“And this ass is mine, mine to fuck, to lick, hell, to stare at as I jerk off.” He removed his fingers from the entrance of her ass and started spanking her with his open palm. He leaned forward, and she felt his warm breath on her ear again. “I own every part of you, and you’ll remember that when some motherfucker looks at you.”

She opened her mouth on a silent cry.

“Rook&#039;s Control” is the 7th book in The Brothers of Menace MC series. Out of all the books that I have read so far, from this series, this is the one I have to say is my favorite. If you like your biker’s hot, sexy, and loyal, as well as mean, cold, and dangerous to boot, then you are in for a wild ride. You get a bit of a sadist Dom in this title. Now throw in Bobbie and you have a perfect mix between her and Rook. I was so pulling for them to make it work and have their happy ever after. Don’t miss out on this series.

Jenika Snow has done it again!!! I greatly recommend this read and can&#039;t wait for the next one!! Excellent read and job well done!!!

I absolutely positively love this series!! At first, I had a love/hate relationship with Rook. A few times I wanted to jump through the book and slap the ever loving hell out of him and then jump his &#039;bone&#039;. I loved Bobbie!! I have seen some reviews not liking the fact that the she was a &#039;club whore&#039;. She isn&#039;t your typical sweet butt. She doesn&#039;t sleep with all the guys, she has slept with only Rook for quite some time now. She loves Rook, has for a long time, if she could only get him to see that. I loved Rook and Bobbie&#039;s story! Can&#039;t wait for the next one!!

I have been waiting..somewhat impatiently...for Rook&#039;s story. Since he was first introduced I have been intrigued by his character. Let me tell you...I was not disappointed! Rook know that hes a screw up. Hes an all around bed person so has done some deplorable things and is not unknown to take what he wants and leave the dregs behind...no matter the repercussions. This is why he thinks he can&#039;t have what he wants for keeps. Bobbie is a club girl. A sweet-butt. MC property to be passed around like an offering plate. Although shes not the typical club girl. Sure shes slept w/ a small handful of members, but once shes in Rooks hands and realizes her feelings for him go beyond the D/s relationship, she refuses any other mans attentions. The club, seems to respect that. They see her as more than just club property. Her mettle has been tested before and shes always come through for the Brothers. Rook fights his feelings for Bobbie. He too has stayed faithful to they&#039;re D/s &#039;non&#039; relationship. He makes mistake after mistake and every time one of them attempt to tell the other the truth of they&#039;re feelings...something gets in the way. Either another woman (don&#039;t worry people...Jenika stays true to her characters) or Rook&#039;s big mouth. When they come together will it be the beginning of the end when Rooks sordid past comes back for revenge? Can he keep Bobbie for good or will he lose her to his mistakes? This is my confession: I&#039;m really HAPPY to see a club girl get a HEA, they have hearts too!

Liked this book more than I thought I would. Neither were my favorite characters, but I gotta soft spot for sadist Doms. I loved that she didn&#039;t make it too easy for him yet wasn&#039;t a total bitch either. Looking very very forward to Tank&#039;s story!

Bobbie and Rook were both so damaged and didn&#039;t think they could do love and a relationship but they finally wised up and now they have a deep love with a lot of scorching sex. What could be better? I can&#039;t wait to read more about Tank and Wrath and Lila and Bunny.

I don&#039;t normally do books with club girls as the heroine, but it&#039;s Jenika and I&#039;ll try anything with her because I love her books! That being said, I loved this one! it was so much more then what I expected from the blurb! Rook takes the word control and smashes is to smithereens! He won&#039;t take no for an answer and Bobbie is in for a world of.....

I think this has been my favorite book in this series so far&gt; Yes, Rook is a complete ass to Bobbi, but he does realize it and tries to make amends. I also wanted to smack Bobbi around a time or two but they finally get their act together. Of course, like in all of Jenika&#039;s book, the danger is far from over and Rook must fight to save her. You will just have to get the book and read it to find out. Another great book and I love the lead in to the next book.

Rook is one yummy Dom. I&#039;d Sir him anytime he wants. Bobbie use to be a sweet-butt until Rook took control and told her only him. Of course he&#039;s a tough alpha biker and won&#039;t put a label on their relationship. Eventually Bobbie gets tired of this song and dance. Can Rook give up his control and admit he wants Bobbie for his old-lady or will he destroy any chance at it? Rook&#039;s past comes calling and this maybe the wake up call he needs but is it too late? Rook is one of The Brothers of Menace MC harder bikers and doesn&#039;t show or deal with feelings. He&#039;s a Dom 24/7. But man is he super hot in the bedroom. I&#039;d let him tell me what to do. Bobbie is one lucky girl. Jenika Snow did a great job with this story because Bobbie and Rook are such different characters than the others in this series. They are unique and there&#039;s lots of hot bedroom action and plenty of excitement to keep the reader entertained.

Loving a man that doesn&#039;t love you in return is like tearing your heart from your chest and leaving it exposed to die. Bobbie is in so deep she can&#039;t see any alternative than to bare her soul and hope for the best. Rook is so hardened from his past that he doesn&#039;t let anything in. Nothing will thaw his exterior and get to his heart. He isn&#039;t deserving of anything because of the things he&#039;s done and he&#039;s not open to having a constant in his life. That&#039;s not for him. At least that&#039;s the bs he keeps spouting. There is one girl he&#039;s singled out for only himself. She&#039;s one girl that at the club and no one is going to touch her. She is his alone to play with and command, but other than that he&#039;s drawn a big heavy line that&#039;s not to be crossed. In reality she&#039;s everything to him and he&#039;s going to keep her close and only for him. Bobbie has finally gotten the nerve to tell Rook she loves him when she walks in on a compromising situation. She pulls back and resigns herself that she will never be more than a sweet butt, just a play toy and not someone worthy of a man&#039;s love. Rook&#039;s wake up call is slow to surface but when it does he realizes he has a very rough road ahead of him to win Bobbie. I loved this book. I love watching a strong man struggle and fight his emotions for a woman. Rook&#039;s struggle showed him how deeply he felt for Bobbie and how he would stop at nothing to keep her. Excellent addition to the series!