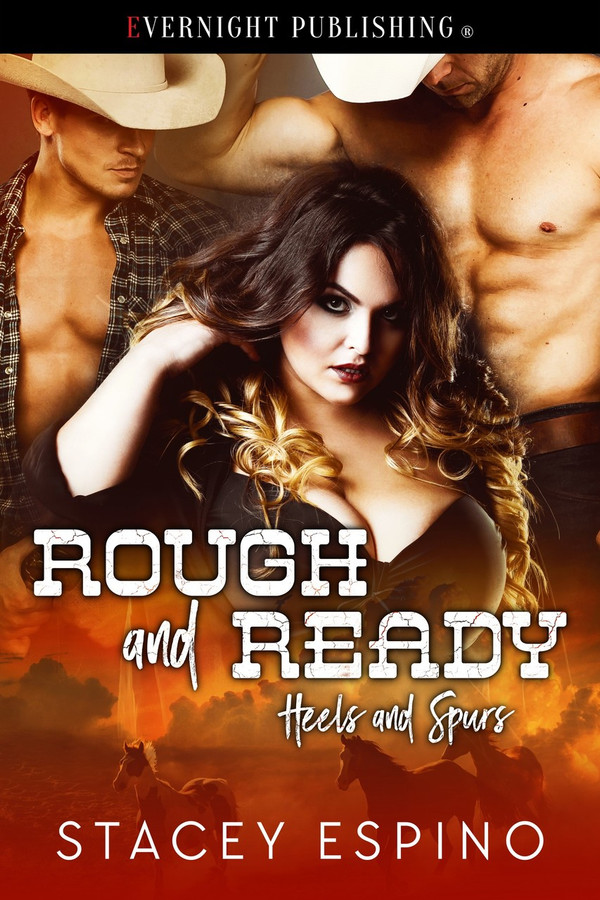 ​Robyn’s ready to sell her soul to climb the corporate ladder. After killing it in the courtroom every day, she enjoys drinks at night with her girlfriends. She has no time to reflect on her life, and that’s just the way she likes it. When her boss sends her to cattle country to get some contracts signed, she’s not a happy camper.

Yukon is convinced he’ll die alone like his father until he spots the cute city girl in the diner. She’s completely out of her element, and he’s ready to be everything she needs.

Parker doesn’t want the busty paralegal to break his brother’s heart. He’s seen her type before, and tries to warn Yukon before he gets in too deep. When she rushes back to the city once her job is done, he realizes she’s taken a piece of his heart with her.

Can Robyn move on from the past and accept real love in her life? Can a city girl and two cowboys have a happily ever after?

A bang from downstairs gave her system a jolt. Robyn panicked as she tried to get everything back into the box in record time. She jumped to her feet and reached up to get the forbidden treasure back on the top shelf.

Fuck! The voice was impossibly deep, the essence of a man. She wasn’t sure if she should be terrified or turned on.

She whirled around after barely getting the shoebox back into place. Parker was leaning against the doorframe, his arms crossed over his chest. He didn’t look angry, but not amused either. How had he gotten upstairs so fast?

“I–I was looking for a lantern. Yukon told me to check every room…” She was still breathless and not concealing the fact very well.

He still hadn’t moved. “Did you have any luck?”

She shook her head slowly, feeling like a naughty child caught in the act. He was dripping wet, his hair pushed casually off his face. He was striking, a man with intensity and presence. When she didn’t speak, he proceeded to unfold his arms and enter the dim room.

Parker slowly tugged the soaking shirt up over his head, tossing it in a hamper near his bed. His muscles looked strained and defined, glistening from the moisture. She couldn’t stop staring, wishing she could lick those drips of water off his skin. When he turned away, she noticed his back was wide and lean-muscled, marred with scars and fresh bruises. He sat down heavily on the end of the bed and pulled off his socks, going about his business as if she weren’t even there. When he stood to unbuckle his belt, she let out an involuntary squeak.

He froze, directing a glance at her. “Problem?”

“I’ve been working my ass off in that devil of a storm for nearly an hour. I’m cold, I’m wet, and if you haven’t noticed, this is my bedroom.”

“Oh.” She felt like an idiot. He wasn’t going to hit on her. She was just in the wrong place at the wrong time. She should be thankful he hadn’t called her out for snooping. “I’ll leave you alone then.”

She bolted in the direction of the door, but Parker moved faster, bracing one arm across the only exit. “I didn’t tell you to leave.” Robyn now noticed the tattooed letters along his inner arm. God, he was drool-worthy.

They were so close. She’d almost crashed into his chest in her escape attempt. She could even smell him, an all-male scent that made her salivate. “What do you think of me, baby girl?”

She narrowed her eyes. “I don’t know what you mean.”

“How do I compare to men in the city?”

Did he actually just ask that? “In what way?”

He smirked, a slight dimple appearing on his cheek. “Not too bright, are you?”

She scowled. “I’m not going to stroke your ego. The county girls might drool over your muscles or think you’re God’s gift to women, but I know better.”

Parker ran his tongue over his teeth, staring down at her with a mix of amusement and intensity. “I was talking about my hospitality, but I like where you’re taking things, sugar. God’s gift, eh?”

Her face heated so hot, her cheeks had to be flushed crimson. She wanted to bite her tongue … right off.

“No smart comebacks? I’m surprised.” He lowered his arm from the doorway and began to stalk forward, effectively forcing her to walk awkwardly backward. “But, then again, everything about you surprises me.”

When her back hit the closet door, she gasped. His perfect bare chest was so close, his abs ripped even at rest. Every time he moved, his unfastened belt buckle jangled, and the band of his boxers was visible. Her control was shot because all she wanted to do was reach out and touch him. The urge became more and more undeniable. She thought about Trey from accounting, a temptation she was smart enough to avoid. Parker would require a new level of self-restraint, and she wasn’t even sure any woman possessed that much power.

She looked up to gauge his reaction. He had a gentle smile on his lips, one so irresistible she hoped he’d steal a kiss. Or a hell of a lot more.

“You have no idea the things I’d like to do to you.” He ran his hand through her hair, a little too rough. This guy was completely no holds barred, and she loved that the political correctness she was used to from men was nowhere to be found. He lowered his head close enough that she could hear him breathing. “You’re everything I should avoid, but I can’t seem to keep you off my mind.”

You and me both, she thought. She wanted to scream for him to take what he wanted. She’d worry about the repercussions tomorrow. Right now she needed this cowboy all over her. She wanted them naked and so entangled that it would be indistinguishable where one started and the other began. Robyn would never see these country boys again, so why not indulge in the fantasy of a lifetime?

I really enjoyed Robyn&#039;s story. I think Yukon and Parker are a perfect pair for her. They give her so much love and confidence. Can&#039;t wait to read more from this author!