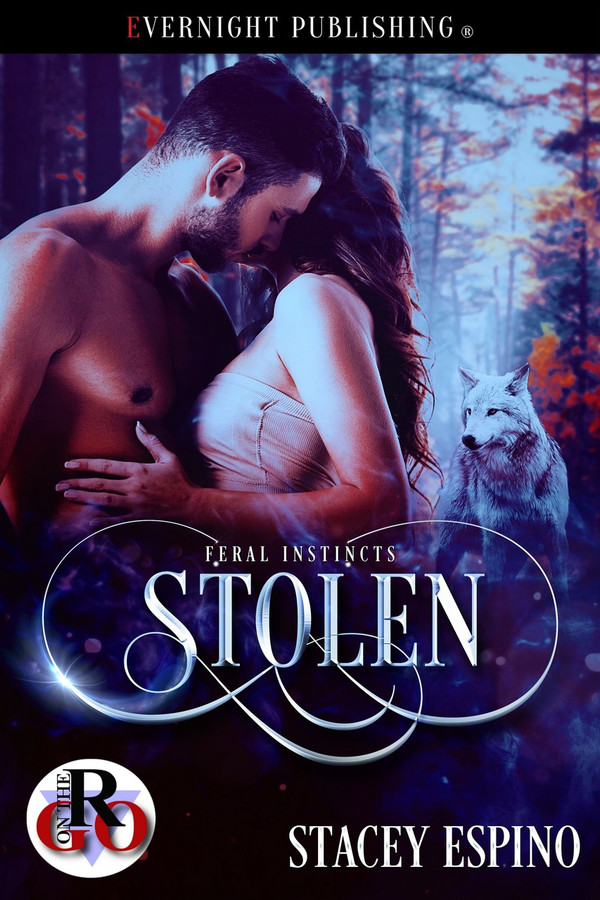 Caroline’s ready to put the past behind her. She’s working in the deep north for the summer, and enjoys the slower pace. Things get ugly when she finds herself caught up in a nightmare worse than the one she left behind in the city.

Grey lives between two worlds, but he’s determined not to take a human mate. When one of his packmates goes missing, the trail leads to a woman working at the national park. He doesn’t hesitate to steal her away, planning to get information at any cost. Grey doesn’t expect the deep-seated attraction he has for her or the sudden need to claim her as his own.

Can he convince his captive that she’s his mate?

Grey looked at his watch. “You were supposed to be at the mine ten minutes ago.”

“Okay, you going to tell me where?” He moved closer, that familiar scent hitting him like a freight train. He swallowed hard, trying to keep his composure.

“She’s in a cage, locked in a shed. Do you have bolt cutters in the truck?”

“The fucking human woman. You were right about her. I found her at the shed, wanted to kill her dead. I’m tired of playing by their rules.”

Rage dripped from his pores, an illogical anger taking control. He shoved Jacob with both hands, making him stumble on his feet. “Did you touch her?”

Jacob looked confused, his eyes wide as he held up his palms in defense. “No, I don’t know. I grabbed her for a second, but I didn’t hurt her.”

Jacob brushed him off. “Whoa, what the fuck is wrong with you? You’re more worried about a human now? She’s not going to report anything, so relax.”

He got back into his truck, but lowered the driver’s side window. “I better not find her scent on you again, Jacob. I won’t tell you twice.” Then he hit the gas, heading to the front gates of the park. Once he was out of sight, no sign of cars or people ahead or behind, he pulled over to the side of the road. He smashed his fist on the steering wheel, then scrubbed both hands over his face. A deep growl rumbled in his chest.

What was happening to him? He was acting completely out of character.

Grey glanced at his reflection in the rear view mirror, not recognizing the man looking back at him. He’d just threatened one of his packmates. Why? He couldn’t explain the new possessive urges taking over his body and mind, but he wanted answers. The first thing that came to mind was getting rid of the human. She’d messed with his head since yesterday, so the answer seemed simple enough. She was a problem that needed to be dealt with.

He pulled up at the front gates, and the mystery woman leaned out the window. “Can I help you?”

Grey stared at her, not knowing what to think, what to say. His mission was Rhaina, and this human was the key to getting her back. But their missing wolf was suddenly the last thing on his mind.

A little smile played at the corners of her mouth. Such playful innocence. “Caroline.” Her long brown hair was kept up in a loose ponytail. Her big blue eyes stared back at him, and he sat frozen in place. “Do you have a reservation?”

Her cheeks turning a flattering pink. “Sorry, but I can’t marry every camper.”

He wondered if she’d flush the same way if he stripped her naked, his head between her legs. Grey ground his teeth together, trying to get a handle on his damn cock. She had him completely spellbound, like pubescent pup.

“You have any space in the campground? I don’t have a reservation.”

Caroline ducked back inside the kiosk, checking her computer screen, and then reappeared. “We only have a few spots because of the long weekend coming up. Is it just for yourself?”

She bit her lower lip, and his dick strained in his jeans. “Do you prefer something closer to the amenities or more private?”

“As private as you’ve got.” After paying the fee and taking the paperwork, he turned to her again. “What time you here until?”

“I’m off at six, but there’s another shift here until ten if you need any help.”

He drove into the park, looking for the fucking camping spot he suddenly owned for the next week. This hadn’t been a part of his plan.

Neither had his new obsession.

This was my first book from this author and I can&#039;t wait to read the next books in this series. I loved the connection between the H and the h. I loved the protective alpha instincts of the H. He truly loved the heroin. I have to say that I truly hated Rhaina, she was horrible, I was so happy when she got what she deserves. Can&#039;t wait to see if Jacob and zeke get their own stories One person found this helpful

This book by Stacy Espino was wonderful &amp; I loved it. For me, it was a quick read, possibly because I couldn’t put it down. Grey thought Caroline was part of capturing a member of his pack, then found she was his mate. Caroline was getting away from a bad experience. And yes, outside interference is infuriating. But they are awesome together, and Stacy Espino’s world is a fun place to be, makes you anxious for the next book!! I loved this!!

I really enjoyed this sweet, sexy read by Stacey Espino. I felt for Grey, he thought he&#039;d be alone for the rest of his life, but found his true mate Caroline. Both he and Caroline had been lonely and alone before fate brought them together. Pick up your copy today!