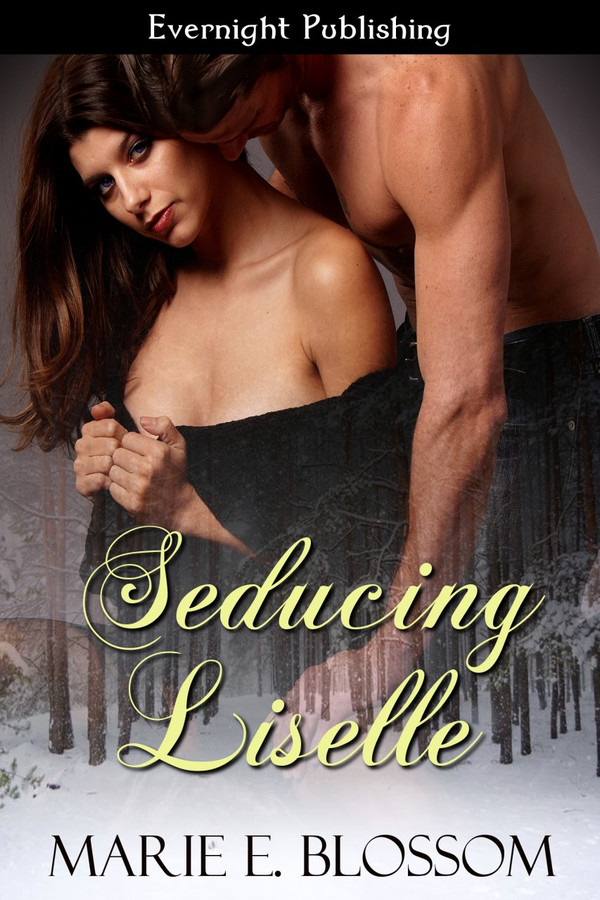 Liselle isn't looking for a hero, especially not at the ripe old age of forty-three, but when John saves her from a blizzard, she can't help falling just a little bit in love.

He's sexy, strong, and ex-military, with a sassy niece and four older sisters who clearly adore him. Even so, looks alone aren't enough to convince her that he can be trusted. After all, her brother and father tormented her for years—she knows better than to think a man can make her happy.

When John comes to her rescue, will she let old habits rule? Or will she let him heat her up and melt the fear in her heart?

She shifted, still trying to get her legs warm. Stupid wet jeans, she thought. “You shouldn’t apologize for feeling protective. I had no idea what to expect, either.” She shrugged, then froze as the movement pushed her ass into his groin. That was definitely his cock.

He sucked in a breath and moved his hand to her hip, holding her still. “Easy. We don’t want to damage anything here.” He sounded both amused and strained.

His voice in her ear was not helping. She tried to relax and bit her lip, holding as still as she could, but she was still chilly. A violent shiver wracked her body. Her hips pushed into him, despite her best efforts. He grunted and she flushed hot with dismay as she tried again to stop moving.

“I can’t help it, I’m still really cold,” she muttered, hooking a hand over the back of the sofa to give herself something safe to hold onto. How the hell could she still be freezing when a beautiful, amazing, sweet man was holding her against his insanely hot body? She wished she could thump her head against something hard. Repeatedly. Until she had control of herself again.

“Hey, it’s okay. Relax,” he said, pulling her hand back down into the blanket. He laughed, dropping his face into the nape of her neck. “I’m the one who should be apologizing to you.”

“What? Why?” she asked, biting her lip again. Maybe the pain would keep her from injuring the poor man.

“Uh, well, I’m just trying to warm you up and my body is giving me a hard time,” he said, voice taut with some unspoken emotion. “Because you’re really beautiful.”

She stopped breathing. He thought she was beautiful? “What—” She had to clear her throat and try again. “You think I’m pretty?”

She could almost hear him frown.

“You don’t think you are?” he murmured, tracing a finger over her cheek.

She shook her head. She was in her forties. Guys did not think women her age were pretty, particularly not when they were a bit plump and somewhat short. It was a rule, or something.

“That’s crazy. You are. You have gorgeous hair, so long and shiny it moves like water through my fingers.” He demonstrated, picking some up and letting it slide to her shoulder. “And your skin is pink when you’re warm and you smell like vanilla. And you’re soft and curvy in all the right places.”

She shivered again, trying really hard to believe she wasn’t hallucinating from hypothermia.

He continued. “But aside from all that, I can tell you’re beautiful inside, too, which is more important than all the stuff on the outside. I knew as soon as I saw you with Beth. Your face when she hugged you—” He broke off, voice thick.

Liselle couldn’t believe he was saying these things out loud. “Am I dreaming?”

He chuckled, tightening his arms around her for a moment. “No, of course not. But I must be insane, telling you those things when we barely know each other. I can’t seem to help myself.” He cupped her cheek, pressing the warmth of his hand into her face. She shivered a little, but not because she was cold anymore.

He cursed softly. “You’re still chilly. You need to get out of these wet pants and skirt.” He moved his hand to the waistband of her leggings. “Okay?”

Liselle was too stunned to say anything or explain that she wasn’t shivering from the cold anymore. Instead, like a ninny, she nodded her head. He popped the button and slid down the zipper of her skirt. She helped him shove it over her hips. He tossed it over the back of the sofa and hooked his thumbs under the waistband of her leggings.

“This okay?” he asked, voice husky.

She didn’t trust herself to speak. She nodded and lifted her hips, feeling clumsy and shell-shocked. Was this really happening?

His breath in her ear was hot as he eased the soft fabric down over her hips. The thin silk of her panties did nothing to hide the blazing warmth of his erection against her ass, but she wasn’t going to mention it if he wasn’t. For the first time in what felt like years she was warm. Gloriously warm and almost … content, except for the way her libido was yelling: hot guy here! Woo!

John shifted behind her, pulling her leggings out from under the blanket and tossing them to the floor. He settled the fleece over them again and smoothed his hands down her arms.

Liselle trembled, trying not to rub against the blazing heat burning into her backside. She wanted to … oh did she want to. She wanted to turn around and kiss him and take him into her arms and never let go, but she had to remember this man wasn’t for her. He was too nice. He had his whole life ahead of him and she was nothing but trouble.

I read this book in one sitting, laughing and crying and cheering on the storied couple. I have to admit that this is one of my all time favorite authors, and if you&#039;re smart, you&#039;ll make her one of yours too! John and Liselle need each other. This isn&#039;t just a boy meets girl/vice versa story. You feel their feelings right along with them. When John is dealing with his sisters and niece, it reminded me off all the times that my siblings drove me nuts growing up. I LOVED this story. It&#039;s realistic, and each character has human flaws rather than being so perfect that they are nauseating. And the sex scenes? Hot holy hell....grab on and take a wild ride.

Reading this story with the characters over the age of 40 was enlightening, honest, and heart-warming. Liselle is the classic damsel in distress, but still a strong independent personality. John is the all-around American Hero good-guy. They fit very well together, and the author gives them a depth that makes them believable. The secondary characters and their roles with the both the main character and amongst themselves gives the story humor and support. The climatic situation will have you sitting on the edge of your seat...but don&#039;t worry at just over 100 pages it is easy to push through and finish in one day, so you won&#039;t have to wait long for that Happily Ever After. Let&#039;s not forget the sex, and believe me you won&#039;t forget about it even after you&#039;re finished with this one!

I really liked how complex the characters were, making the story intense and fun to read. It is also fast-paced so there is never a dull moment in the story.

I enjoyed this book. The plot was fairly predictable HEA but I liked the characters and enjoyed the fact that they were 40ish and both had realistic hangups although hers were stretching the boundaries. The secondary characters actually added to the story and added depth to the action. I would recommend this book to friends.

This is now the second book that I have read by this author and I have to say that she is fast becoming one of my favorites! It&#039;s great to see real women with real bodies at a real age, the heroine of the story! Everything captured my attention from the fresh plot, to the action, to the relationships, and of course the love scenes. I look forward to reading more from this author!

Well there went what little faith I had in the judicial system. Liselle is from an unbelievably abusive family and even restraining orders won’t protect her. When she finds out her brother fathered a daughter she opts to contact her and meet with her. Even though she’s in hiding from her family because they always root her out and hit her, literally, and extort money. And the law can’t help her. I had a hard time with that part of the story. Regardless, Liselle is cut from an entirely different cloth and feels connected to her niece instantly and relieved her abusive brother is now out of the picture. But to protect them all from her nightmare she leaves and is rescued by John, her niece’s uncle, when her car breaks down. They have a wonderful night of passion and then she leaves. Months later John is contacted and he goes to find Liselle deathly ill. He brings her back to the fold and chaos ensues. I enjoyed the hyper speed romance between Uncle John and Aunt Liselle as well as John’s interactions with his all-female family. Liselle, in all her damaged glory, came across as vigilant and caring but I really hope she gets some therapy. And that John goes with her. These two are majorly damaged and I felt that was actually the glue that held them together. The sex was steamy but maybe went a little too far too fast for some. All in all a good read.