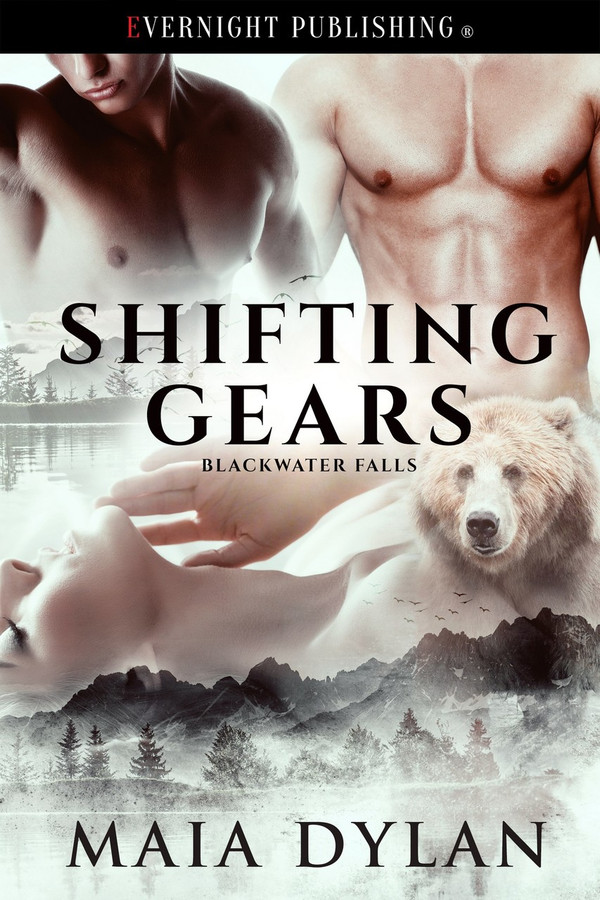 Hannah Browne is heading for a change. Blackwater Falls represents a dream come true chance at owning her own garage and workshop. As she nears the town, she’s singing her favorite tunes, and witnesses a man exploding into a huge bear. It was that last part that had her driving her 1970 Chevy El Camino SS into the tree line.

Alpha of the Blackwater bear clan, Ryker Barrett, and his brother Bastian are struggling to deal with Ash, a pain in the ass Alpha wolf with delusions of grandeur. It all goes horribly right when they inadvertently introduce themselves to their mate by shifting in front of her. Their shock turns to rage when they learn that Ash is the reason she’s come to town.

Can they figure out what Ash has planned for the three of them, or will they shift gears too late and end up losing it all?

Hannah Browne grinned at the sign that announced how close she was to her final destination. She had been on the road for the past three days, taking her time with the journey and enjoying the cross-country trip with every town she passed through. It had been a long time since she had taken her 1970 Chevy El Camino SS out on the highway for a decent run, and the past three days she had enjoyed every mile the V8 ate up.

She wound the window down and breathed in the Wyoming mountain air, taking the chill of it as deep into her lungs as she could. This was what it felt like to be free, and she relished the feeling. This was a new start for her. An opportunity to shift gears had presented itself, and she was going to take a hold of it with both hands and never let it go. After everything she had been through in the last five years, all the sacrifice and the loss, this was the start of the chapter in her life that was going to be all about her.

“That’s right, Daddy,” Hannah shouted aloud. “Your baby girl is starting her new life as of today and living it just how you always wanted me to!”

Her excitement level began to increase, and hearing one of her favorite songs starting up, she reached out to turn up her car stereo. She started singing along with Meryl Streep as loud as she could, not something she would ever do with anyone else in the car, but when it was just her, her Chevy, and the open road, it was almost a sin not to. There was something about the open road, music blaring, and a sweet, sweet ride that really brought out the—

“Motherfucker! Shit, oh shit!” She wrenched on the wheel, turning off the road as hard as she could, aiming her beloved Chevy into the trees that lined the highway.

She slammed her foot on the brake, but as soon as the truck’s eighteen-inch tires met the gravel on the roadside, any hope of stopping before she made impact was lost. The truck left the road and might have actually caught a little air before it plunged into the forest. The trees loomed large in the windshield, and she knew she was about to write off her prized possession. But no one could blame her for her actions. When she had rounded that corner, two men had been standing in the middle of the highway, surrounded by a group of wolves.

But they didn’t look like any of the wolves she had seen on the animal channel or any of the wildlife programs her dad had forced her to watch over the years. These wolves were huge, and if they were standing right in front of her, she was certain they would come up to at least her shoulder. And if she wasn’t mistaken, just as she made the decision to drive her truck into the forest rather than into the animals standing on the highway, the taller of the two men exploded into a bear.

an ok read, I liked.