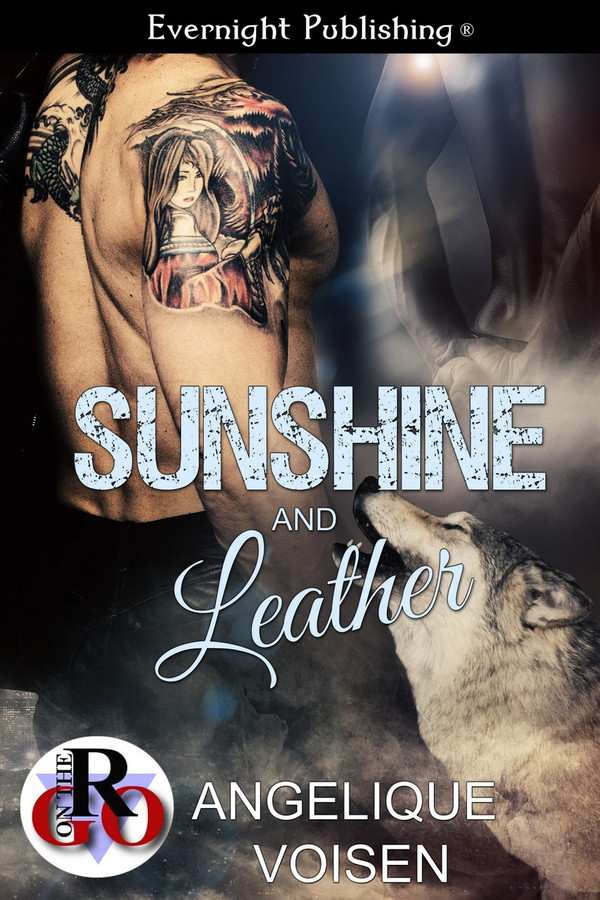 A miserable phone tech by day and a dedicated gamer by night, Sol Daniels doesn’t have much of a life. Now because of a werewolf bite, he’s out in the streets in the middle of the night, looking for some action with another shifter to ease his ache. He’s not hoping for much. Sol knows he isn’t a catch, so he’s surprised to hook up with leather-wearing werewolf Detective Aries Sanders.

Aries has been looking all over the city for the man he bit. It’s just his luck he sees Sol slumped at a bar, looking lost and dejected during mating season. Aries knows all Sol needs is a firm, loving, and permanent dominant werewolf mate, but Sol has the impression all Aries wants is a one-night stand. Can he convince the needy new wolf what he wants is a commitment?

“Don’t cover yourself.” Aries’ growl made all the hairs of Sol’s neck stand. “I want to see you, all of you. You understand, sunshine? Cover your gorgeous body up again and I’ll bend you over my knee.”

Aries’ words made Sol weak in the knees. He was confused. A part of him actually wanted to fall over the other man’s broad and muscled lap and feel the heat of Aries’ hand coming down on his bottom. Sol shuddered, his hands shaking as they fell to his sides.

Aries sat against the sofa, and it felt odd to be the only one standing and exposed. Like he displayed himself solely for the pleasure of the other man. Sol wasn’t the kind of man most men and women desired, so a part of him still refused to believe anyone would want him this badly.

Cold and uncertain, he trembled until Aries pulled him to his lap.

“Hush, Sol. You have no reason to fear me, so just relax and enjoy yourself.”

“This is all wrong. I don’t know why I’m reacting like this.”

The press of Aries’ damning and hungry lips silenced Sol’s next words. The other shifter’s large hands sliding across his bare flesh made him shudder. His touch firm, possessive and leaving a trail of goose bumps.

Sol leaned into Aries, eager to rub his bare flesh against all that hard muscle.

The force of Aries’ desire flooded through his mouth like a broken dam, effectively silencing all his silly hesitations and worries. Sol groaned against Aries, who sucked tenderly on his bottom lip. Aries’ mouth felt unbelievably good.

Some part of Sol was aware of his needy and rising cock, but he no longer felt embarrassed or worried.

Their tongues touched each other tentatively at first before twining like mating snakes. Sol opened his mouth to let Aries’ demanding tongue inside, let the other man thrust his way in. He enjoyed Aries’ hands wandering across his body. Aries didn’t comment, didn’t make fun of the body Sol had always felt awkward and ashamed about. The other man handled him like an object worthy of desire and attention. Like a gift.

It thrilled Sol to the core. Fire licked at his belly and his cock, and his balls drew in tight against him.

“I want…” Sol panted when Aries stopped fucking his mouth.

“What do you want, sunshine?”

“You.” The admission and need flowed out of him easily this time.

“I know, sunshine. First, I’ll give you what you badly need.”

Quick and hot, this short story is about a man recently turned werewolf, Sol, who has no idea how to deal with his new existence. Aries is the werewolf who turned him, then lost track of him, and has been trying to find him ever since. Between the two of them, they have quite a few issues to deal with, but how they’ll get along in the bedroom is the focus of this tale. Sol is miserable in his job and doesn’t have much of a social life. He likes to lose himself in online games and is more in tune with some of the roles he takes on slaying monsters than he is with his actual personality. When Aries finally tracks him down his first instinct is to run, but the things Aries does to him and the thoughts the almost-stranger causes Sol to have give him pause. He may not think of himself as attractive, but who is he to resist when a leather-wearing detective who seems to know what Sol needs crosses his path? Aries is a detective but he is also a werewolf, and he is a demanding partner in the bedroom. He can’t forget Sol and has no intention to let him go once he finds him again. Aries has also figured out that Sol is a submissive, and making Sol lose himself in what Aries does to him – instead of video games – becomes Aries’s new objective in life. And what can I say? Aries is very good at it, and Sol clearly enjoys what is happening to him – despite any protests he may think he needs to utter. If you like stories about a dominant man taking over in the bedroom, much to the submissive guy’s delight, if two werewolves pairing up for mutual satisfaction are your thing, and if you’re looking for a read that is as hot as it is short, then you might like this short story.

The storyline is a great one and the characters are so dominate and submissive which I love because they seem so real and i can really get into their lives when I can see them in my brain as a real person. Sol Daniels is a submissive wolf by nature and during mating seaason he really wants to find his mate and not just have sex. Sol wants to have that special one to love him and Sol would love to show someone how he will please them in any way shape or form if they just ask. Sol ends up meeting Detective Aries and Sol thinks Aries is going to hurt him and use him like he has been in the past, but that isn&#039;t Aries intention. Aries and Sol are mates and Aries wants to help Sol accept his submissive side with love, caring and understanding and not abuse, or meanness either. He just wants to take care of his mate and that is Sol. They both have a lot to learn about each other. This is the second book I have read from this particular author and I loved this book, just like her first one. This is one author that I will keep my eye on and continue reading her books if Ii get the chance!

Biting, spanking and a wham-bam ass slamming is what happens to Sol Daniels. Sol&#039;s life is boring and solitary until one day he&#039;s dragged into an alley by a huge guy who proceeds to bite him. If this wasn&#039;t messed up enough, now he figures out the bite turned him into a werewolf! With his first change about to happen, he doesn&#039;t know what to do and where to go. All he knows is that he&#039;s horny as hell and needs to have his itch scratched. This story is straightforward with little conflict. It&#039;s easy to read in two wolvie licks! There is little downtime as Sol&#039;s aggressor turns out to be sexy Detective Aries Sanders. Some may find this trope about law enforcers being big bad wolves taking male submissives hard up the bum to be overdone. Not so for me. I still enjoyed this one as Aries sweeps in and knocks Sol off his feet and into his bed. The sex is kinky and no frills. Both men know what they want and Aries makes sure he gets it--RAW. The characters are uncomplicated just as the world building is scarce. Still, this is an enjoyable read for those who like their sex quick and dirty, especially for readers who enjoy a male receiving a hard spanking. For those wanting a deeper connection and more BDSM play, this isn&#039;t going to be the book for you. For those looking for a smexy fun read, this is the book for you. Recommended for m/m readers who like a bit of biting and spankable fun.