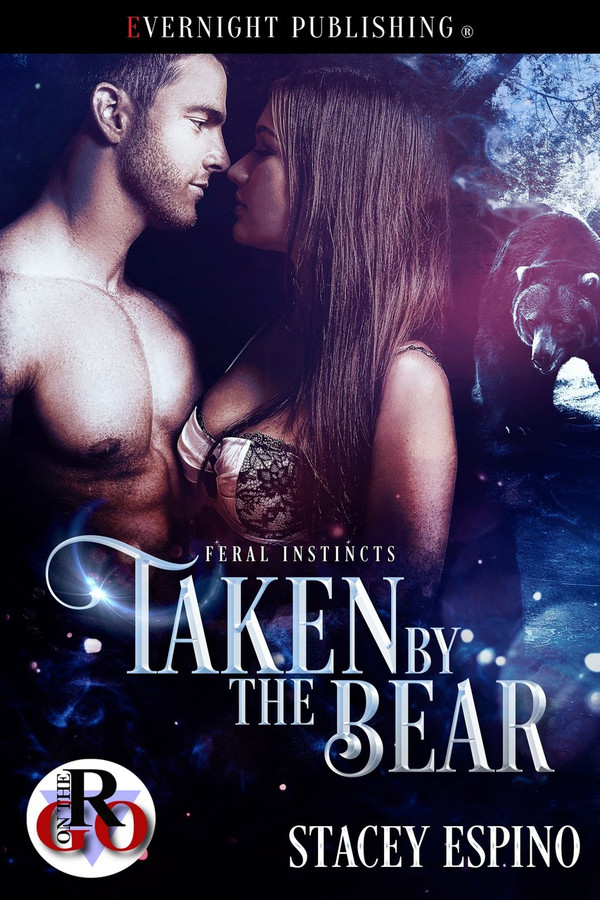 Bastian is a reclusive alpha bear living deep in the Alaskan wilderness. He never expects to find his mate—until she signs up for one of his tours. It doesn’t take long for him to know she’s his woman. The rest of the tourists are free to leave at the end of the day, but Callie isn’t going anywhere. His bear demands he claim her.

Callie finishes off the trip of a lifetime with a scenic adventure tour. What she doesn’t plan on is falling in lust with the tour guide. He’s tall, muscular, sexy-as-sin, and he’s very interested in her. A relationship with him seems impossible, but he teaches her to follow her dreams.

When Bastian is challenged by another bear wanting to take his mate, it’ll be a fight to the death. If he survives, he’ll have to convince his little human that life in Alaska is better than what she had in the city. And that nights with an alpha will leave her begging for more.

It had been a rough morning, but the only thing on his mind was Callie. As soon as he saw her ship closing in on the mainland, he could finally breathe easy. After the first re-route, he thought he’d lost her. This time he wouldn’t let her leave so easily. He had to convince her to stay, to make her understand that she was his mate.

He’d make her happy, regardless of what Ranger thought.

Voices drifted closer to their location. The other tourists were fanning out, exploring the forests near the beach.

“Come on.” He grabbed his jacket and took her hand, traveling deeper into the wilderness, farther than the other humans would dare to venture. As the forest grew denser, the sunlight was masked, leaving them in the soft lighting his mother used to call bear’s dusk. His parents loved Alaska, and raised him and his brother to embrace their same values.

He released her hand. She looked up, spinning around slowly. The fractured beams of light infiltrated past the lacy network of leaves, picking up the dust motes in the air. She smiled, reaching her arms out as if to capture the magic.

“I don’t even know what to say. It’s so beautiful here,” she said.

“You’re the first man to make me feel special.” She nibbled her lower lip.

Bastian thought it was bullshit that a woman like Callie hadn’t been snatched up by now. Human males were fools. “I’m different than other men.” He wanted to tell her he was a grizzly bear shifter, only half human, but still completely in love with her.

“You are. You’re bigger. Stronger.” She ran her hands down his arms. “Attentive.”

The scent of her lust was driving him insane. He couldn’t stifle the last growl as it rumbled up from his chest.

“Kiss me again.” Callie rose on her tiptoes, seeking his lips. Her hand cupped his crotch. His cock was already hard and heavy. Her touch unhinged him.

He wanted to tell her not to play with bears. Bastian was a beast and behaving while she teased the shit out of him wouldn’t end well. “That’s all yours if you want it,” he said.

There was no waiting. Bastian sat on a large, moss-covered fallen tree. “Take everything off, Callie. I need you.”

She stood between his legs and he helped her get off her pants and sweater. Then came her bra and panties. She kept looking to each side, terrified they’d be caught. This far out, they were safe from prying eyes. “It’s so cold.” Her skin broke out into gooseflesh, her body trembling.

Bastian held her hips and took her in from head to toe. All he could think about was eating her pussy, making her scream, and claiming her forever. Her body was deliciously curvy from her juicy tits to her rounded hips. He tugged her closer. “I’ll keep you warm, baby.”

He suckled her right tit, his eyes lolling in his head. She tasted just how he remembered. He teased her nipples, alternating between both her breasts. “Oh God, Bastian.” Her mewling sounds were pure sex, desperate, and needy. He smoothed his palm up the inside of her leg, her soft skin a sharp contrast to his rough hand.

Bastian impaled two fingers into her wet little cunt. She dropped her weight for a moment, taking him to the last knuckles. Callie cried out, bracing her hands on his shoulders. He pulled off her tit with a smacking sound. “What’s wrong?”

“I need you inside me. I can’t wait anymore.” Her words were music to his ears. His cock had been ready since yesterday. She’d been all he could focus on.

He leaned back, his fingers still inside her. They stared at each other. Her nipples were red, firm buds. Her chest heaving. “You want me to fuck you? Here in my forest?”

He finger-fucked her while she watched. In and out until she was dripping wet.

“You’re my mate, and no other women will ever do.” Get ready for smoking hot chemistry; add the bear and mates and you have the start to a great story. Bastian is an Alpha bear who has just found his mate when she signs up for one of his tours. The book is a typical paranormal romance with an alpha that would do anything to protect his mate, though his mate being a human creates some problems. The major one being – will she stay with him in Alaska? When Cassie sees Bastian, there is an instant attraction and an urge to be with him. The plot was simple and not overly complicated. The climax for me was the highlight. The plot evolves quickly since it is a short book, but even in that short amount of time there was a solid story. It was not all sex. I enjoyed reading Taken by the Bear.

Short, great story. Evolves pretty quickly. I loved the characters and putting it together with the simple plot it was a wonderful short read.

I&#039;m a sucker for a book set in Alaska. The thought of being snowed in, in a quiet little cabin in the woods sounds heavenly to me. So I grabbed this book up and it didn&#039;t disappoint! it&#039;s short and to the point, but still filled with hot sexy times and action.

Scarlet and the Three Bears by Stacey Espino