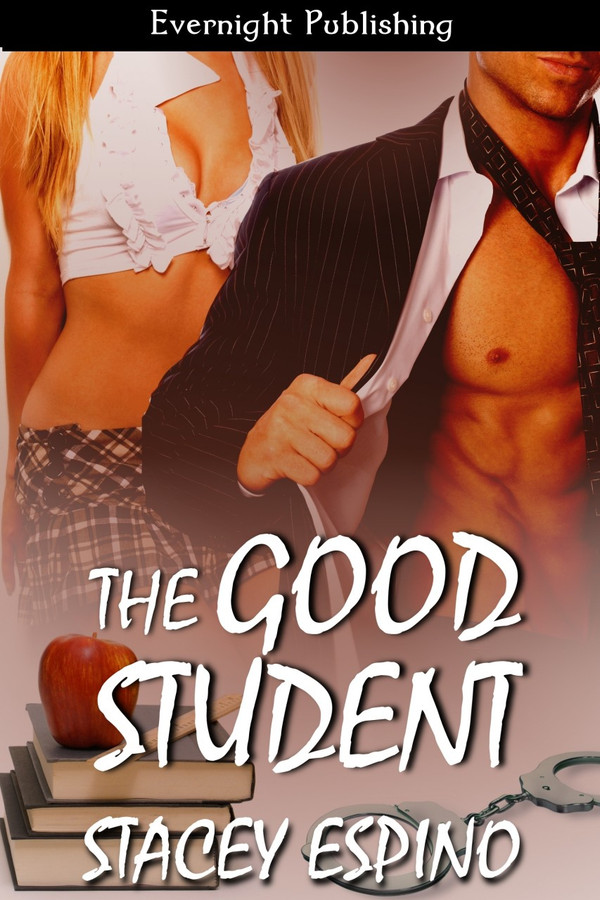 Have you ever had a crush on a teacher?

Kaya's tired of playing the good girl. All it got her was a broken heart and nothing to show for it. When she transfers to a new university, she's instantly attracted to her philosophy teacher. He's older, wiser, and his position promises security and commitment.

Getting the hard-bodied Mr. Taylor to notice her isn't so easy. He's determined to keep professional and ignore all her attempts at flirting. But as time passes Kaya realizes there is more between them than just intense sexual chemistry. When her teacher finally takes a chance on her, all bets are off.

Kaya and Hayden embark on a passionate love affair that heals both their hearts and turns up the heat. When Hayden's dominant side appears in the bedroom, Kaya can't get enough. Nothing could be better—if only their love wasn't forbidden.

He kicked open a door at the other end of the condo. This room was dark, heavy curtains blocking out the city lights. Only the faint glow from the living room allowed her to see.

Hayden laid her on a king-sized bed with a lush satin comforter. It felt cool against her arms and legs.

"Remember what I told you? About wanting to restrain you?"

She nodded. It would mean giving up all power, becoming vulnerable to this one man. Did she trust him enough? If she had to choose one man besides her father that she trusted over all others, it would be Mr. Taylor. He was an honorable professor with a respectable character. The way he spoke and looked at her made Kaya ready and willing to submit.

He slipped the straps of her dress down her arms as slow as melting chocolate. Then he worked the material down her curves until off completely. She propped herself up on her elbows, feeling so exposed with her breasts bare and only her thin lace undies covering her. It was titillating. He looked hungry as he stared, his eyes raking over her body. "Beautiful," he whispered. "I still can't believe you want to be here with me."

"Of course I do." She reached her hand out to him, but he just winked and opened a drawer in the low dresser against the wall. He pulled out a pair of silver handcuffs and let them dangle on one finger for her inspection. "Handcuffs?"

"All the better to restrain you with." He was playing with her, reminding her of how he behaved in class. But this was anything but innocent. He raised his arms above his head to show her what to do. She complied. When he crawled over her body, his broad shoulders and muscled frame were a delicious temptation, but she held her arms straight up as he wanted.

"I thought you liked me being your good girl."

"Even good girls need a little naughty in them." He hoisted her higher and secured her wrists to the headboard slats. She tested her binds, but she wasn't going anywhere until he wanted her to.

She watched his movements, wondering what he'd do next.

He slipped off the bed and ran his fingers down the length of her body, hooking his thumb in the string of her panties. When he inched the material off, leaving her nude, she held her legs tightly together.

"You'll have to learn not to be shy with me, Kaya. I'll never hurt you. I only want to make you feel good."

She tried to loosen her muscles, relaxing her thighs, but it was difficult.

He braced one knee on the bed, spreading her legs wide. It was the oddest feeling to not be able to move or pull away. She was bound and had to endure whatever he decided to subject her to.

"What's good for the goose and all that, right? I'm trying not to be too selfish." He bent down, his head lowering towards her pussy. She felt his hot breath against her moist, sensitive folds. She instinctively bucked up, but quickly lowered her hips. This would be another new experience for her.

Kaya Waters is attracted to her sexy teacher. There is just something about him that makes her feel wild in a way that no boy could ever satisfy. When he suggests that she is too young, that it is not a good idea, she is driven to tempt and taunt him into her arms. Will he be the man she knows in her heart he could be? Hayden Taylor would have to be a saint not to notice Kaya’s dedicated campaign of seduction. And he is not having saintly thoughts at all when faced with the lithe beauty that seems determined to destroy his logic and steal his heart. Can he resist the one woman he has desired in such a very long time? Passions collide and the two of them set off on a course for pleasure. But not everyone is thrilled that they are together. One student, a boy who has been pursuing Kaya, will do anything to get her, including destroying Hayden if he has to. Will their love be the thing that destroys them both… or the only thing that can save them? An erotic tale full of sexual tension, Espino has fulfilled one of the most well known sexual fantasies. Who has not sat in a classroom and ogled their teacher, imagining them throwing horn-rimmed glasses aside to unveil a sex god? But this story is unique insofar as the characters actually have a lot in common, making their romance believable and their tenderness likeable. All in all a fun frolic full of sex hot enough to fog up your glasses, horn-rimmed or not.

The Good Student, by Stacey Espino, is a deliciously taboo story of a teacher wanting his student and the student wanting the teacher. After a fifteen year mistake- erm, marriage, Hayden Taylor is gun-shy about jumping into the relationship arena. When shy good girl Kaya steps into his classroom, he knows that he is fighting a losing battle. When she expresses her own desire to him, he promises to keep it professional. She promises just as vehemently to keep it as personal as possible. I love the teacher-student angle in this book. He is dominating but loving and she is the shy and quiet student needing a guiding hand. Of course, there are troubles in romancelandia. When another student takes a shine to Kaya, Hayden isn&#039;t sure if she is playing him or interested in the younger man. Overall, this was a very quick read; I wouldn&#039;t have minded a longer story and I would have liked the relationship to pan out more. For a fast read that hits two of my favorite yum factors, I did enjoy the book.