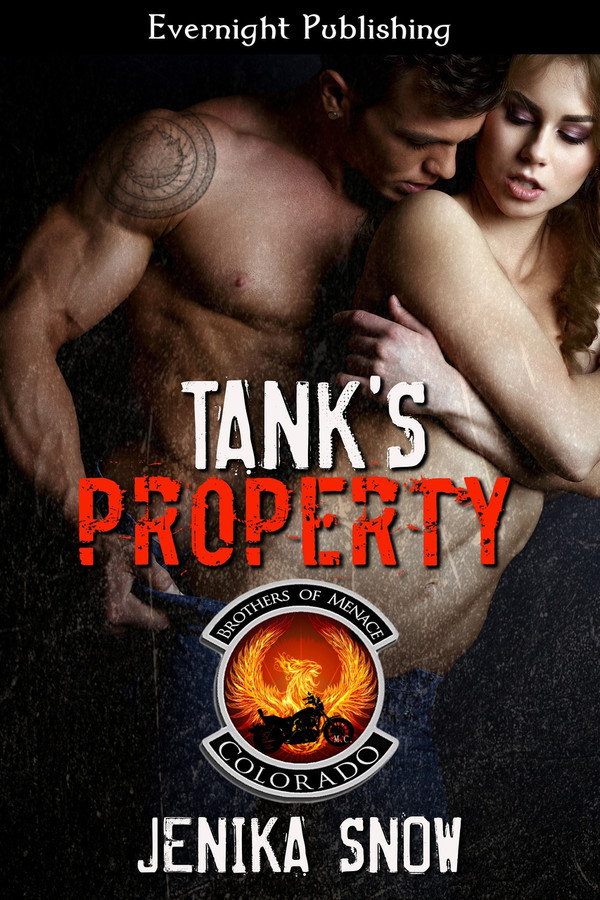 The Brothers of Menace, 8

Tank loved Bunny, but she ran from what they could’ve had. Now, years later, she’s still the only woman that holds a spot in his heart. A member of The Brothers of Menace MC means he’s had to move on and focus on the future. But when he finds out Bunny and his sister, Lila, may be in trouble, he’ll go to any lengths to make sure they’re safe.

Bunny’s abused past made her leave the only man she’s ever loved. But everything since then has been void of life, and she knows it’s because she doesn’t have Tank. He’s the only one that’s ever made her feel like she deserves more.

But when they’re finally together will the past keep them apart? With a psycho after them, Tank knows Bunny is the only woman that was meant to be his. That means he’ll walk through hell if he has to in order to make her his.

His face was still so close to hers, and his warm breath smelling slightly of whiskey moved across her lips. She swallowed again, felt her nipples bead, and had wetness coating her between her thighs. The longer he stayed silent, the more nervous she became, and the higher her arousal climbed.

He groaned right before claiming her mouth.

“I fucking want you, baby,” he said against her mouth. “You’re the only woman that has ever held my heart, Bunny. I love you.”

“No more apologies, baby. You’re here with me now, and that’s all that matters.”

She kissed him harder but felt him pull back slightly again.

“I’m different than I used to be, Bunny,” he said softly, his voice like sandpaper along her flesh. “You should be afraid of me now. I’ve done things that can never be undone.”

But I let you down, and now I need to atone for that, need to make up for it in showing you how much you mean to me.

He leaned in, and she held her breath. Tank moved his hand from behind her head, cupped the side of her neck, and moved his thumb along her pulse point beneath her ear, just looking at her in the eyes.

“You should be afraid of me, Bunny.”

Tank lifted his hand and ran his thumb along the top of her lip, just barely touching her. Her body lit up even more. “It was smart of you to run from me, because the man I am today is darker.” He slipped his thumb against the seam of her lips now, and without thinking she opened her mouth and sucked his finger inside. A low groan left him, and his mouth parted as his focus was on her lips.

I really like that The Brothers of Menace MC books are short reads. Each stands alone but I think would have even been much better if I had of started with book one and worked my way through the series. “Tank’s Property” is a good read about lost loves that were able to get it together and make things work for them. They finally get their HEA – Happily Ever After. Overall, this is a great series. Jump right in and pick up any of the books or get started with book one for a more complete world. I can’t wait to read more.

Tank is one hell of a man, through and through ! He is definitely one in a million! He has his life just as he wants it, he just got patched into the club and things are good. Then trouble in the form of his sister and niece appear and then his past along with theirs comes back to his present and throws everything within him into turmoil. He needs to find his sisters friend who also happens to be a woman from his past that owned his heart and soul. The passion between these two lost souls is as strong as ever and totally undeniable. The emotion and patience that Tank shows Bunny because he is aware of her past and that she is more fragile than some is both heart warming and heart breaking all at once. That such a strong and powerful alpha male is able to be brought to his knees by this tiny woman was a powerful and emotional read but absolutely enjoyable and I cannot recommend it highly enough! Another must read from this amazing author! Happy Reading!

A brilliant story with a hot alpha man who is protective to a fault, he&#039;s sweet but he is tough and uncompromising. Great story can&#039;t wait for the next one.

Oh my! What&#039;s better than a hard as nails but soft as a teddy bear biker? Nothing much. :-) That&#039;s what you get with Tank. I loved this book! I love this series! One of the things that I loved the most about this book is that it shows us that we have to forgive ourselves to move forward. A very valuable lesson. Another hit for Jenika!

Tank had his heart broken years ago when Bunny left after they shared something special. Years have past and his sister, Lila, showed up needing help and letting him know Bunny might be in danger as well. Tank knows he needs to find Bunny, and bring her back to the clubhouse. Bunny is a woman that was raised being abused and is terrified, so she ran. After years have past, Bunny still loves Tank and regrets leaving everyday. Tank shows up at her house and takes her back with him. Will they be able to survive this? BUY THE BOOK!! I love Tank and his softness when it comes to Bunny. You get a little glimpse of Lila and Wrath and hope we get read their story soon.

I don&#039;t know how Jenika Snow makes every new book better than the last. Every one I&#039;ve read is incredible. She is an incredibly gifted writer. Tank was the big brother that took care of everyone. This meant his sister Lila and her best friend Bunny. Tank practically raised his sister. Their deadbeat parents did care about them at all. Bunny&#039;s home life was one nightmare after the next. Her only saving grace was Tank teaching her father what happens to men that abuse little girls. Over the years Tank &amp; Bunny fell in love but Bunny&#039;s fears about what love really was scared her into running away. They finally found each other when Lila ran back to Tank in fear of her boyfriend. I&#039;m not giving anything away! All I will say is buy this book! It will make you fall in love with the MC.

I&quot;ve been waiting for Bunny&#039;s story since she was mentioned and now we have it. Tank has loved her for years but she has a tragic and really bad past so she ran from him. Now she&#039;s in danger and Tank is there to protect her. Jenika&#039;s books are an automatic buy for me everytime and they have never failed to impress me. I totally fall in love with each man she writes about. The book is a standalone but in order to know who everyone is, it&#039;s best to read the series from the start.

I loved Tank&#039;s story. So much love he has for his sister, his long lost love, his Mc, old friend (hoping Wrath story is soon) he&#039;s a real man. This was fantastic, the club will never fail for the ones they love and protect!!!!! Tank, dangerous, sexy, dayummmmmm. Loved this story , Love this series

Jenika Snow books are an automatic buy for me. Tank&#039;s Property did not disappoint! It had everything I look for in a MC book. Family, love, danger, and totally alpha males! If I had one negative thing to say about this book (which I don&#039;t), it would be that it&#039;s too short ;)! I would have like to seen more of the other members and their women welcoming Bunny and Lila to the club, but it was still a great read!!!