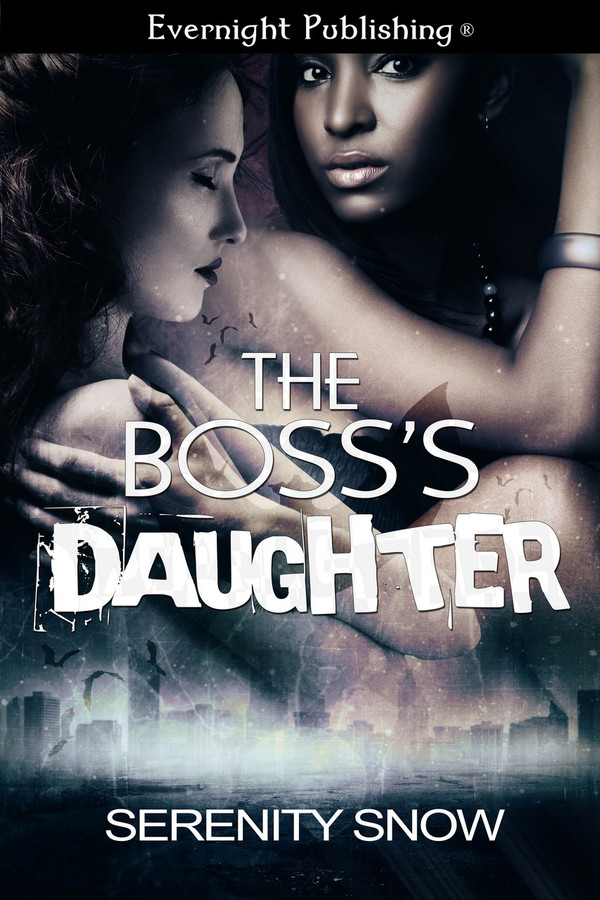 Fallina Mira is a closet lesbian who’s been in love with Kensal, the female vice president of her mother’s company for a year. A chance encounter at a sex club with Kensal sends Fallina down a spiral of passion that sears her soul and brands her as Kensal’s forever.

The closer she gets to Kensal she learns her woman is anything but human. She also uncovers a world of vampire bats and deception that could lead to deadly consequences for all involved.

She knocked on the door and a muffled “come in” had her stepping inside. Kensal was seated at her desk, head down and bent. She studied her profile, drinking in the smooth brown skin and black hair. In her ear, gold gleamed.

“Yes, Fallina?” Her head came up and their eyes met in a rush of heat and need. It was a punch to her stomach that took her by surprise. It had been the same way this morning and it had left her confused as she was now.

She felt slightly compelled to go to her, to do whatever she asked.

Kensal got to her feet as she had this morning and rounded her desk. The tailored navy slacks were still crisp as was the charcoal gray blouse she’d paired with them, but her navy tie with red swirls had been loosened. There was no mistaking Kensal as anything but female despite the distinctly male cut of her Berber suit.

Damn she was beautiful and had the confident grace that must turn even straight women on.

She perched on the edge of her desk, motioning for Fallina to take one of the chairs. “What is it, darlin’?”

She squared her shoulders and cleared her throat. “I’m going to insist that you treat me with the same respect you treat my mother with.”

Kensal’s lips twitched in a mocking smile that made Fallina grit her teeth. “Subs don’t insist on anything other than having their hard limits adhered to, and not being abused,” Kensal said evenly as she moved back around her desk.

“Well, I’m not a sub in this office,” Fallina snapped as she watched Kensal open a desk drawer and reach into it. “I’m your superior.”

“Yes.” She crossed her arms over her chest giving Kensal a belligerent look that faded quickly as a twinge of uneasiness started in her as Kensal’s champagne eyes went dark gold.

“Is that a fact?” Kensal moved around her desk not taking her eyes off Fallina.

“It’s a fact.” Fallina tilted her chin up with bravado.

Kensal stalked toward her with unhurried grace as Fallina backed toward the door. “I guess I’ll have to demonstrate the dynamics of our relationship,” she murmured.

“We had sex,” Fallina snapped. “That doesn’t give you any rights over me, Kensal. Do you understand?”

“What I understand is you need to be taught your place, little one.” She closed in on Fallina as she nearly tripped over her feet backing up. Kensal reached out to grab her, but Fallina evaded her.

This time Kensal’s hand clamped around Fallina’s arm and jerked the younger woman toward her. Fallina drew back to slap Kensal and the older woman caught her hand before sweeping Fallina’s leg from under her sending her toppling to the floor. She grunted and tried to sit up, but Kensal was straddling her, pinning her arms above her head before Fallina could even draw breath.

Fallina tugged and squirmed in Kensal’s hold. She was stronger, and Fallina found Kensal barely had to move to keep her pinned.

“I’m going to get off you, little girl,” she said patiently and used one hand to hold Fallina’s hands in place as she reached into her pants pocket and pulled out a pair of handcuffs. “When I do you’ll wish I’d stayed just like this.” She shifted and her stamen pressed into the pad of Fallina’s pussy.

This book is so hot, you might need to fan yourself. The scenes are just heat inducing. A light ...and hot enjoyable read that will keep you turning the pages for more. I really enjoy Snow&#039;s novels.

I have read all of the books in the series and actually stumbled on this one last lol not sure how that happen. I really enjoyed where the author took this story it was different and unique not your normal lesbian vampire read. In all 4 of the books this is my favorite followed by Ruby....Sapphire and Azura. If your looking for a hot read this is your story boy was it hot but there is still a good story behind it. I love everything vampire and this did not leave me disappointed.

Book Review This is an incredibly imaginative story with multiple levels evocative of the standard tussles that occur in business, a fantastic world of bat shifters including vampire bats, and a tense confrontation with a good deal at stake swirling around both the business world and various hostile combative shifter clans. This starts out a tad slow with a few plodding moments—and then wham...all hell breaks loose! As numerous things metamorphosize, a volatile and violent showdown is imminent, with life, death, and power on the line. Astonishing! Kensal Obsidian is a rather shrewd businesswoman who as vice president and head of marketing has pretty much been keeping a once-successful lingerie company afloat as the owner has been slowly sinking into a non-functional alcoholic haze. Tara Mira, owner of Red Silk, has a daughter who she feels is less than competent to take over, leaving a serious gap for solid continuity to manage Tara&#039;s company as she enters rehabilitation. Kensal initially appears uncommonly deft and savvy. I think she is actually considerably superior to everyone in the business and astoundingly focused and masterful. In actuality, she keeps the business afloat. She also has a burning drive and need to find her mate. The details around the mate acquisition stuff was a bit mind-boggling while indisputably fascinating. Plus, this is the first clue to Kensal&#039;s undeniable real nature. The rest of the picture will blossom later. Stunningly sensational! Fallina Mira has a beautiful and sensitive artistic streak which is artfully realized by her developing aromatic scents that are magnificently complimentary to all the lingerie lines of her mother&#039;s company. This is Fallina&#039;s comfort zone and she feels this is where she can best serve Red Silk. She doesn&#039;t feel competent or comfortable as an owner, director, or manager. An early sub-story has her disagreeing with her mother who wants her to find the right man, when Fallina is quite sure she needs the perfect female as a loving partner and life mate. Early intimate developments between Fallina and Kensal merely gave me a delicate taste for the depth and scope of their naturally evolving intimacy while troubles surrounding Red Silk grew. Phenomenally felicitous! I appreciated the early part of the book a great deal more after being completely wowed by the paranormally intense closing confrontations along with amazingly graphic sexual interactions between Kensal and Fallina, enhanced by Kensal&#039;s unique physical attributes. I do recommend this book and urge you to stick with it. Gratifyingly glorious!

No sparkles just a really hot sub/dom relationship. Bought from publisher’s website and wanted to leave a review because I really enjoyed the world the author create and would like to read more.