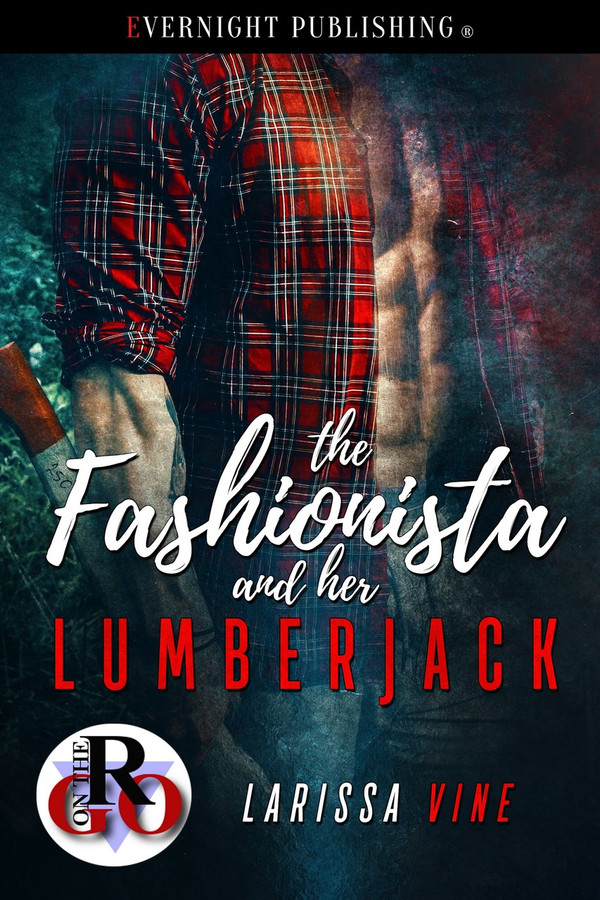 April knows that it's going to be the holiday from hell. She's facing a whole week of camping in the wilderness with her best friend, her best friend's new boyfriend, and with Rory—a lumberjack. April knows that she and Rory won't get along. He's too rugged and muscular to ever be her type—even if his sinful blue eyes do have an unsettling effect on her.

A corset. Rory couldn't believe it. The fashion girl from London shows up for a camping trip wearing a God damn corset. He can't believe that he's going to have spend his vacation with such a pouting princess.

But over the next few days—to the backdrop of pounding surf and old growth forest—April and Rory's feelings toward one another change. But can their passion overcome their prejudice enough to find romance—and maybe even love?

She sat in the corset, sipping Evian because it was important to stay hydrated on flights. Beside her, Miranda was working her way through a package of Ready Salted chips. April tried not to shudder every time that she heard a crunch or to stare pointedly at Miranda’s thighs. But honestly, had she no idea how many grams of fat were in that package?

She turned to Miranda. She needed to think about something other than the chips. “So what does Dan look like?”

Miranda’s eyes lit up. “He’s gorgeous. Haven’t I shown you a photo?”

She unstrapped her seat belt, reached down to the foot well, and fumbled around for her bag. Then she got out her phone and switched it on. April craned her neck toward the screen. She let out a shriek and cracked up laughing. It was photo of Dan’s dick.

“Wow,” she said. “He really is pleased to see you. So you’re at the sexting stage already?”

Miranda closed the picture. Her face and throat were red. “Here—here he is.” She clicked open another photograph of a man in his mid-thirties with short, curly brown hair and sleepy golden brown eyes.

Miranda nodded. “Did I tell you he’s a fireman? It sounds cheesy, but I really think he might be the one. We’ve been emailing and texting constantly. It feels like I’ve known him forever—like he’s my soulmate. He’s just so … nice. I want this holiday to be perfect, so that he’ll fall in love with me. I couldn’t bear it if anything went wrong.”

A ripple went through April. She reached over the armrest and patted Miranda’s forearm. “Nothing will go wrong,” she said firmly. It felt like she was making a vow.

Miranda beamed. “Thanks. You’re such a great friend. You’re always there for me.”

April felt a swell of pride and wished she’d laced the corset more loosely. “So,” she said. “What’s the low down on his friend Rory?”

Miranda crunched on another chip. “He lives in Vancouver and owns a tree-planting business. Every summer, he goes up north to plant trees. But this year there are forest fires, so he’s hanging around Vancouver until the firefighters have them under control.”

“A Canadian lumberjack. It’s kind of a cliché.”

April could picture this Rory clearly. He’d have rough hands and shitty clothes. He definitely wasn’t her type. Not at all.

April is excited when her best friend, Miranda, finally falls for a guy. Only he lives in Canada, and after a few too many Mai Tai’s April agrees to fly out there to go on a camping holiday with Miranda’s new man and his best friend. Only April and camping don’t mix very well and she and Rory get off to a rocky start. April is determined to try and enjoy the experience – for Miranda’s sake if nothing else – but against all odds she finds herself becoming more and more attracted to Rory. I found this to be a fun and lighthearted story. I worried a lot at the start that April was a bit too focused on external appearances and her very typical yuppie lifestyle. It was clear to me that she wasn’t malicious or vapid, but just like Carrie from Sex and the City annoys me after a while so too did April feel a little two-dimensional to me. Thankfully though, April’s character did an awful lot of growing and exploring and I really started to get on board with her little journey of self-discovery with Rory. My only other slight disappointment was the conflict between Miranda and Dan felt rather over-blown to me, though I definitely understood the plot-related purpose it served. Overall though I found this to be a fresh, fun and different story and feel readers who enjoy chick-lit style stories should really love this. I also appreciated how April and Rory had a slow-burn to their romance, giving them (and me) time to grow into the blossoming relationship. The sex was hot and lovely – but was only one small aspect to the story so readers who like more plot and characterization to the stories should definitely find this appealing. A fun and happy sort of book, this was a lovely quick read and one I enjoyed.

A Second Chance on Love by Larissa Vine