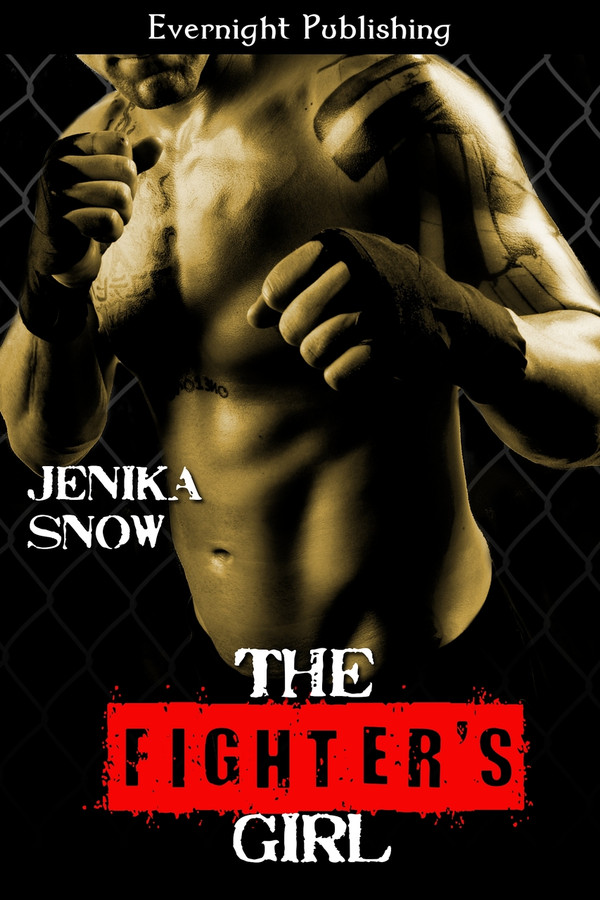 The Fighters of Absinthe, 1

Izzy Castle's life is anything but exciting. Her only entertainment is working at an adult store, but even that leaves a lot to be desired. But when her roommate of only six months, Brock Larson, makes a move on her, Izzy decides that a little harmless sex with the cage fighter might be just what she needs to feel alive. But she has seen his other one-night stands do the walk of shame, and Izzy doesn't know if her heart can withstand that humiliation.

Brock fights for the underground circuit. He takes what he wants, when he wants it, and makes no apologies for it. He wants Izzy, but it isn't for just one night—what he's used to. Izzy's his, and he will get his knuckles bloody proving that he may be roughened, but when he wants something as badly as he wants her, he won't give up.

Before she could even blink he spun her around and pressed her against the dirty brick wall. She hated and loved when he finished a fight. The after-fight sex was always rough, always carnal, and always the best fucking coupling they had.

But this wasn’t just about the adrenalin and endorphins flowing through him. He was also angry and worried about her, and because of that he wanted to stake his claim. She loved it when he got like this, loved the power that flowed out of him and surrounded her. He didn’t hold anything back from her, gave her more than she could handle, and never apologized. And she loved him more for it. She wore a skirt, no panties, and when he lifted the material up and pressed his fingers to her pussy, they both groaned.

“It fucking pisses me off when you do this shit, Izzy.” His words were a rough growl against her neck. He may get pissed about her not wearing panties when she came to one of his fights, but there was also a part of him that loved it. That was evident by the rock hard erection digging into her back. “I think you like me to lose control, don’t you?” His mouth was on her throat, licking, sucking, and having small noises leaving her. He reached between their bodies, and without removing his mouth from her neck, pushed his shorts down. “You know what to do, baby.”

She sure did. Lifting her leg up and hooking it around his waist, she waited for him to take hold of her other one and lift her up. The brick scraped along her back, but the pain felt so good. His cock pressed between her pussy lips, and a groan spilled from both of them. He moved his hands until he had a firm hold on her ass. He braced his legs apart to steady them and pushed his hips further between her thighs. That first touch of the tip of his dick-head to her pussy sent a thrill through her body. He rubbed himself up and down her slit, faster and harder until Izzy was grinding herself on his erection, trying to get him to penetrate her fully. She wanted him buried inside of her, pounding her pussy so thoroughly she felt him everywhere.

“Fuck, you want it bad, don’t you?” There was nothing but heated intent in his words, and she prayed he would stop torturing her. Izzy wanted to be fucked good and hard.

“I’m done with this teasing bullshit, Brock.” He grinned at her.

“I want you to tell me who you belong to.” This caveman bullshit turned her on so fucking much. He ran his teeth down her neck. “Tell me and I’ll give you exactly what you need.”

She was still high from kicking that drunken scum’s ass, and knew she was more dominating than even she liked to be. “You know you do, that I am always yours, only yours.” Pressing her pussy down harder at the same time he grunted and pushed into her had the tip of his dick sliding into her pussy. He clenched his jaw, and the sight of that muscle ticking under his skin had a soft moan coming from her.

“Just shove that big dick in me, Brock.” She blamed the endorphins and her hormones for the fierce fire that came from her. Brock looked down at where his cock was nestled between her pussy lips. He didn’t break contact with that sight for a very long time, but she knew he liked looking down there, knew it made him hot to see how wet and stretched she was for him. She tried again to push herself back on his shaft, but he tightened his hold on her.

“Don’t push your luck, Izzy.” He snapped his head up and looked at her. “I’m already pretty fucking far gone, and liable to tear you up.”

She leaned forward, lowered her lashes, and said in a low voice, “I want you to tear me up.”

That was all it took for him to give her what she really wanted. He pulled her away from the wall just enough that he could bring his hand down hard on her ass.

“I fuck you, not the other way around. Do you understand?” He brought his hand down again and again on her body until it stung and she was whispering that yes, it was he who called the shots.

This was a good quick read. Izzy and Brock are roommates until one night when they act on their attraction. These two had some really HOT scenes and they really connected.

Brock is just ridiculously sexy. The way he seduces Izzy is so heady and evocative and the tension between the two before they finally come together is so arousing it fairly burned the pages. While Brock isn’t as refined as some romance heroes, he is delicious and manly. Izzy as his roommate and friends makes his perfect mate. I was gratified to see their happy ending. As for the author, I’d never read anything by her before, a situation I plan to rectify shortly.

Cage fighter Brock Larson is used to taking what he wants. He wants his roommate, Izzy Castle, and he isn’t about to let anything get his in way of claiming her. But Izzy isn’t complaining if the Brock wants to get busy between the sheets. She’s up for the challenge, just hopefully her heart can withstand him walking away. Izzy knows that there is no way Brock is looking for anything other than a night of harmless sex. Or is he? Once again the poignant pen of author Jenika Snow gives readers a treat, seemingly tapping into their deepest and darkest fantasies, creating an absolutely delightful story to savor. Throughout the story, there seems to be a raw sensuality to Ms. Snow’s writing that is conveyed honestly and uninhibitedly through the hero and heroines’ actions that actually seem to send a chill to the reader. With The Fighter’s Girl being the first book in this exciting new series, the author superbly paces the storyline as well as the relationship between Brock and Izzy, giving the reader not only a look at what’s ahead for this series but it also portrays connection between the hero and heroine realistically. Bad boy heroes don’t come any better than Brock Larson! This drool worthy bad boy trains hard, fights tougher, plays rough and loves like there is no tomorrow. Lucky Izzy! Brock is a sexy and dangerous alpha hero who might not be a fairytale Prince Charming but there is something irresistible about him that captures the reader’s heart. Like with all of the author’s stories the heroine, Izzy is portrayed like a real woman, one with curves, charm, insecurities and gumption. When these two lovers come together the sparks ignite and the passion seems to set the pages ablaze. The sex is uninhibited — smoking hot and seductively passionate between Izzy and Brock but there is also an emotional depth between them that adds to the loving creating a connection that is solid and lasting. The Fighter’s Girl is one story that is next to impossible to put down! Once you start reading don’t plan on doing anything else!

I&#039;m not much for the fighter books. I am however a big Jenika Snow fan so I gave it a shot and I am so glad that I did! Brock was a very yummy, alpha male with an inner core of heart. Izzy was just your average women with some self confidence issues. Their chemistry exploded off the pages so much that I got chills.

Owned by the Outlaw by Jenika Snow