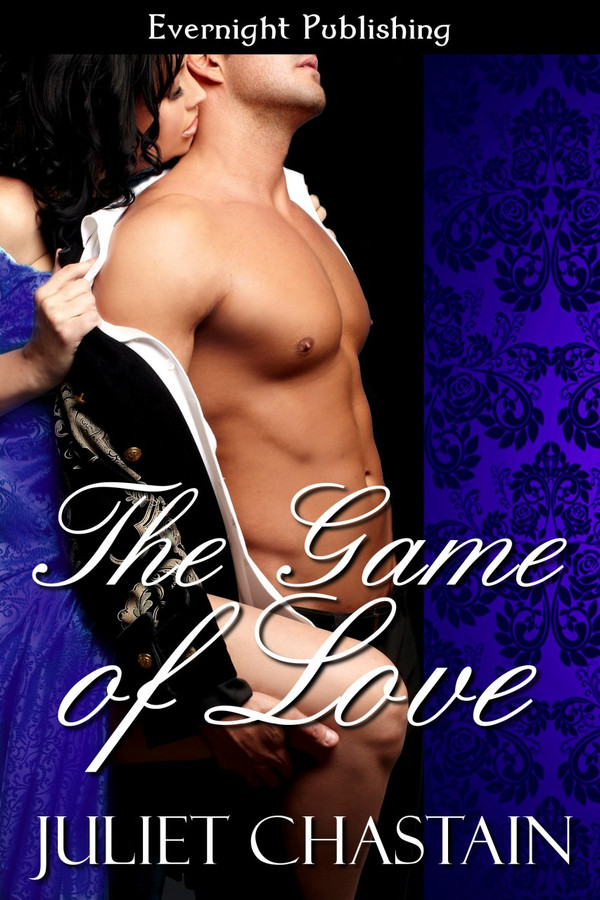 If love is a game, this Regency rake and uppity miss screw it up royally.

Lord Adam Wingate is a master player at the Game of Love—except when he actually falls in love. Then he does everything wrong.

Miss Kitty Wingate is learning how to play the game under the tutelage of her amoral guardian, but she too is at a loss when it comes to the real thing.

To the amusement and dismay of their friends and relatives, the two prove that true love can be blind. Very, very blind.

Smokin' hot passion in the library, in the imagination, and under the breakfast table. Does it have to get interrupted every time?

Unbidden, the thought arose of how his lips had felt against her own, and her heart constricted and then beat loud and fast. Unwillingly, she remembered how he had caressed her breasts. She didn't want to, but she could almost hear him saying how he loved the feel of her. She must not allow herself to think these things. She must not! He was only playing a game with her—the game of love. The game Charles wanted her to play, but she didn't want to. She wanted more than a game with Adam. And she didn't really want to play this game with other men.

Her mind whirled and swirled madly until finally, exhausted, she closed her eyes.

She heard the gentle click of the door to her bedchamber opening and closing. Footsteps approached and then Adam sat on the bed beside her. He stroked her hair, murmuring that he adored her that he always had and always would. That he loved her and her alone among all the women in the world. That he had been parted from her through no fault of his own, and nothing pleased him more than to be beside her once again. He said he would never allow himself to be parted from her again. She felt him lie down beside her, and his arms come around her. She could feel his warm breath in her hair.

"I've been so unhappy," she said softly. "I didn't know what to think."

"I will explain all in time, my love. It grieved me mightily to leave you as I did. I could think of nothing but how I might return to you. I hungered to hold your sweet person." His arms tightened about her. “Every night I dreamed I might kiss you…" And his lips were on hers. Gentle, loving.

She sighed with pleasure. She could feel her breasts swell, her most secret part ache for him. As they kissed, he ran his fingers through her hair, then down her neck. He stroked and squeezed her bottom.

Suddenly his hands came to her face, his palms pressed her cheeks as his tongue pushed between her lips and tangled and played with her own.

"This gown," he said, pulling gently at her nightgown, "it keeps the feel of your delectable skin from me." She sat up and pulled the gown over her head as he whispered his delight at the sight of her naked body.

He caressed her breasts as his lips teased and nipped her neck. Then his mouth came to her nipples and licked and sucked one as his fingers and stroked and squeezed the other and she murmured her delight. The pleasure from her breasts flew down to her most secret parts, lighting a fuse there. Suddenly, violently, she wanted him. She wanted him inside of her. Now.

Instead, he moved between her knees, bent to her, licking her, pushing his tongue inside her, his hands holding the cheeks of her bottom. Driving her madder and madder with desire for him. And suddenly the exquisite feeling seemed to bloom and expand, filling her, and she catapulted over the edge into divine free fall.

Before she had landed, his finger was there, the sensations almost intolerably good, and yet, she wanted him—his shaft—inside of her.

"Please," she said, "please…" but the delicious sensations overcame her and she could speak no more, but only groan with the pleasure of it.

She went flying over the edge again.

Romantic, funny, and maddening (in a good way). When I wasn&#039;t laughing at Kitty and Adam&#039;s antics, I found myself wanting to smack some sense into them because their feelings were obvious to everyone but them. This is exactly the sort of story I&#039;ve come to expect from Juliet Chastain and I thoroughly enjoyed it.