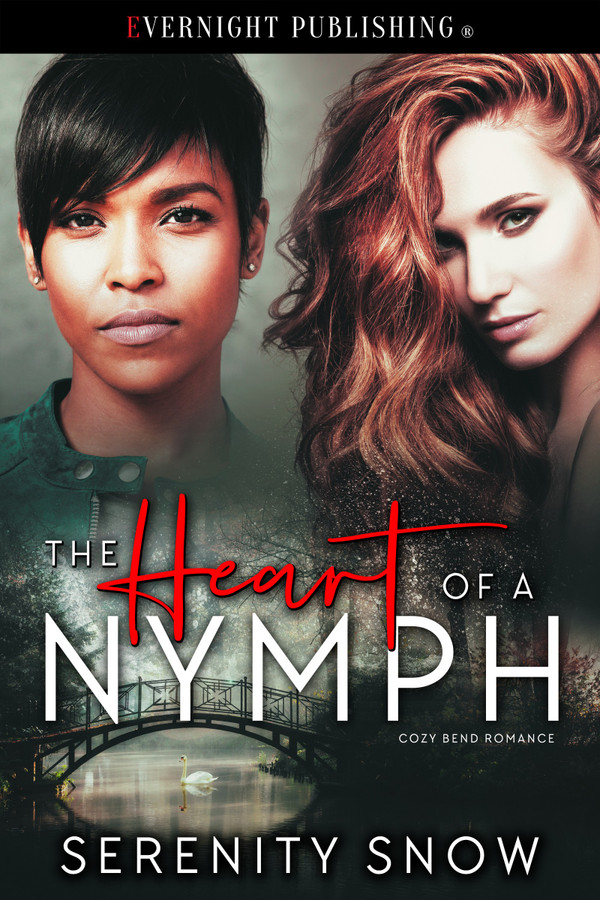 Mirabella McLean was hurt once before. Having come back home, she was content with the life she'd built. At least that’s what she told herself. Then, sexy Raegan Greenwater rode into her life and triggered a part of Mira she never knew existed.

However, Mira resists the woman she can’t seem to stop thinking about because Raegan is all wrong for her. She’s too young, too bold, and the dominance rolling off her scares the pants off Mira. But a little lie makes it impossible for her to stay away from Raegan after all, they’re supposed to be dating.

With her back to the wall, Mira can allow the nymph that lives inside her to claim the life that’s hers, or she can turn away from the passion infecting her. Mira knows she has to make a choice but will fear win out over love?

Mirabella allowed her gaze to rove slowly back up to those eyes, and the woman winked at her. Something inside her sparked to life. No, reawakened, setting her entire system aflame with gray ice. She called it that because when she’d felt this cool watery alien feeling in her teens, she’d known it wasn’t normal, it was a strong force beyond control.

Then, she’d been afraid of what might be wrong with her, but tonight Mirabella grinned and motioned to the bartender. She’d come here for a good time, and she was determined to have one.

“Another?” The attractive woman lifted a brow. She was clad in black jeans with spiked dark blonde hair. Her midriff was bare, the top a bustier that hugged her breasts.

“And one for the curly girl down the bar,” she said. “The one in the black shirt.”

The bartender nodded and poured another finger of scotch into her glass. Then, she moved down the bar to the cutie in the black shirt. From what Mirabella could see of it, the cut was distinctly masculine, and Mirabella wondered what the rest of her outfit looked like.

She didn’t normally ask butches out, but that was because most of them wanted to top and she wasn’t a bottom, but there was something about this one she was drawn to.

Mirabella watched for her reaction. The woman glanced down at her, those brown eyes, set in a pretty face with a sensual mouth, were nothing short of entrancing. They made her want to fuck the night away.

The woman took her drink and got off the stool. Mirabella sighed and decided to chalk that one up to a bad guess on her part. It wasn’t like she couldn’t afford to buy a few drinks.

“Thanks for the drink, beautiful,” a whiskey voice said from her left. “I was about to buy you one, but I love a woman who isn’t afraid to make the first move.”

Mirabella turned her head to meet chocolate eyes that washed over her in a heated wave that made her cream. She caught her breath, but fought to get herself under control as her gaze slowly moved down from the pretty face over the shirt and down to faded worn jeans and boots.

The toes were scuffed, giving the leather a perfectly lived in appeal. There was a black leather jacket in her other hand, dangling limply.

The stranger set her drink on the bar and slipped a hand into her pocket as she held Mirabella’s gaze. Those brown eyes were intense as they swallowed her.

Mirabella barely contained the shiver as her interest piqued even more.

“Do I meet with your approval?”

Her voice was low and rolled over Mirabella, making her nipples harden even as her breaths grew shallow.

Mirabella shrugged, struggling to regain her composure. Normally she was the one making the moves and getting women hot. She liked it that way, but there was something refreshing about having the tables turned.

“Not at all,” Mirabella said, looking at her again. She normally liked long hair on a woman. However, this stranger with her short curls appealed to her for reasons she didn’t understand.

She climbed onto the stool. “What’s your name?”

“I’m Mirabella.” She didn’t use her full name in bars.

She never ran into the women she met here in the city at home, but Mirabella didn’t like taking chances. Though, now, she was standing on a precipice. And she could keep hiding while people whispered behind her back, or she could give them something to talk about.