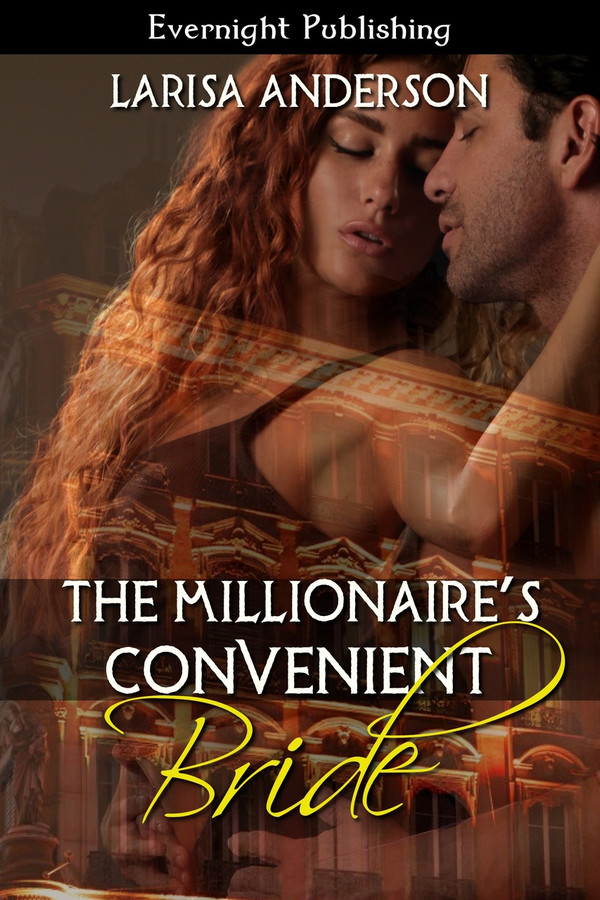 Louisa wanted nothing more than to be self-sufficient. She had her own law firm and no man in her life to complicate things—until, that is, one of her biggest clients and family friends dies, leaving Louisa to deal with the life-changing directions in his will.

An accident leaves Louisa in the care of her deceased client’s son Dominic, her high school fling and the very person who will complicate her life. Before she can leave, and save her heart, news comes that her other clients have abandoned her.

Dominic seizes the chance to get Louisa back into his life and offers her a deal she can’t refuse. Marry him, and he will save her law firm. Can Louisa keep her feelings in check long enough to get away from the man who threatens to steal her heart and the life she has built for herself?

His dark eyes sparkled in the half light. She felt a warmth spread through her body that had nothing to do with the tea she had drunk.  She found it hard to believe that she ever mistrusted him. He was taking care of everything with such efficiency and care, and he was doing it all to help her. She didn’t know why she did it, but she found herself leaning forward and kissing the corner of his mouth.

“Thank you,” she told him, leaning back and using her next move to hide the silence that followed.

She looked up just as his hand reached behind her head and pulled her mouth to his. His lips were warm and soft, moving gently against her mouth. She opened to him and felt him deepen the kiss. He tasted of tea and something that she couldn’t identify. She wanted more. His fingers caressed her neck as he placed last kiss on her swollen lips. He pulled back slightly and rested his forehead against hers, his breath still hot against the sensitive skin of her lips.

The waiter came at that moment with the food they ordered, and they broke apart reluctantly.  She couldn’t look at him. She waited for her pulse to stop thundering around her body. She could still taste him on her lips. The temptation to trace them with her tongue, to taste him again, was overwhelming, and she tried to keep her hands from shaking as she ate. She had to say something to break the silence.

“Thank you for arranging this so quickly,” she said finally as she put her fork back on her plate and moved it to one side.

“It’s the least I can do after putting you in such a position. You have enough to worry about.”

He smirked as he pushed his own plate aside and made his next move on the board. “Check.”

Louisa sighed and relaxed again. She had been afraid that he might want to talk about what just happened. She smiled at the cocky grin on his lips. She had the impression he knew exactly what she was thinking.

“Drat,” he muttered, as she took his queen. He leant over and rested his elbows on his knees, a look of concentration now replacing the grin.

“Dominic, can I ask you something?”

“Mmm,” he mumbled still studying the board.

“When I left all those years ago, why didn’t you call me?”

She hadn’t wanted to ask, but she couldn’t move on with this arrangement knowing that he had just let her go once before, that he hadn’t even tried to get her to come back. She knew it was childish of her. She had been the one to walk out, but he had just let her, not even bothering to call and ask why. She spent so long after their last day together wondering. Her friends tried to take her mind off him. With every blind date Louisa felt more and more that she had lost something. Love sounded so old fashioned, but all she knew was that she felt so calm, so happy in Dominic’s arms. Once she lost that, it had taken her years to convince herself she needed to move on, and she could never forget. Telling herself it wasn’t meant to be helped her get on with her life. Now here he was again, like a ghost, and she couldn’t help but feel betrayed. The door of the café opened allowing a breeze to blow past her carrying the scent of the street, wet and cold. She had to know. Had he thought about her after that night? Or had he seen her as nothing more than another woman in a long line of conquests?

His gaze shot up to meet hers, his eyebrows raised in what was clearly surprise.

“I did call you. Each time I called, your roommate answered and said she would leave a message for you.”

Louisa frowned. She hadn’t received any messages. She asked her roommate Cassie many times over the first few weeks if anyone called for her.

She clicked her tongue against her teeth as she thought. “I didn’t get any messages.”

“Does it matter now?”

Self-sufficient career woman Louisa loves her life just the way it is. But it all becomes very complicated when a family friend dies. She is left to deal with his will and the fallout expected from his children when they learn of the changes to the important document. However, when an accident leaves her injured and relying on a man that broke her heart years ago, Louisa knows she’s in big trouble. The plot of this book was great from the beginning with Louisa being involved in an accident and the hero rescuing her, although it must have been hard for her to have to rely on someone else because she’s so independent. The dialogue was well-written and easy to follow in both illustrating the fractured relationship that Louisa and Dominic had as well as how their love for each other had never gone away. The sex scenes were hot and showed how much both of them still needed the other, even when Louisa was trying to fight her feelings. What I liked so much about Dominic was his willingness to help find the person out to hurt Louisa and use anything he could to his advantage, even if it meant getting her to marry him so she wouldn’t suffer financially. While with Louisa, I was glad she was willing to give the hero a second chance because he certainly deserved one. Overall, Ms. Anderson has penned a wonderful tale of past heartbreak and how tragedy can help a hero and heroine find their way back to the other to achieve their happily ever after. And which has now made me eager to read more of this author’s work in the future.