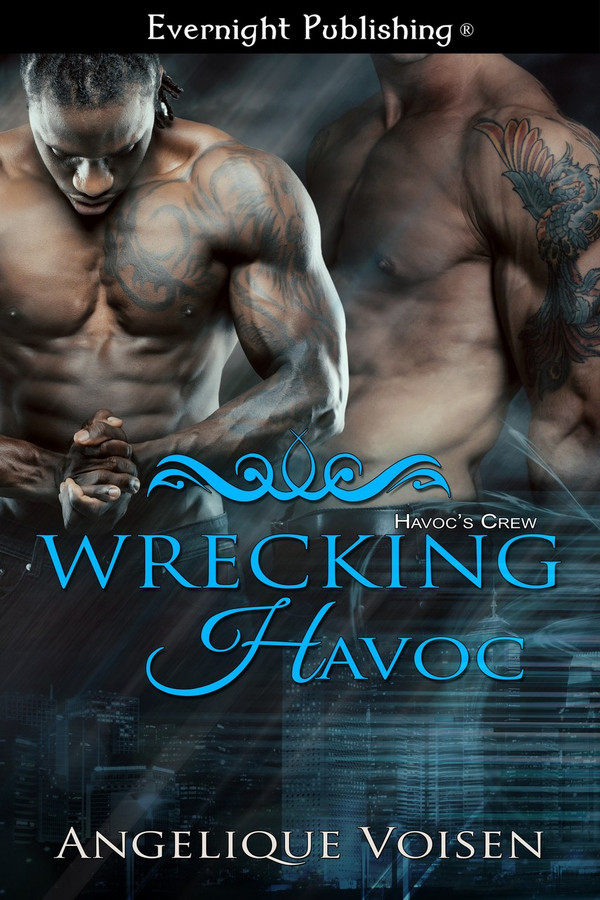 During the course of his long life as an immortal wizard, Havoc has seen it all, done it all. Getting rid of an old enemy is a small price to pay to protect those he loves, and his family is the only reason he still hasn’t gone to the grave.

Havoc knew Gale never viewed him as a father figure like his brothers. He knows what Gale wants, but Havoc refuses to give in. Gale doesn’t know about his bloody past, or the monster he used to be. When old sins and buried ghosts begin to resurface, he expects Gale to start running, but Gale refuses to back down. If Gale continues heading down this destructive path, Havoc is afraid it isn’t just his heart Gale’s going to wreck. He’s going to undo them both.

“Stop trapping yourself in the past.” Gale leaned forward, catching Havoc’s bottom lip, beginning to nibble and suck.

He felt Havoc reacting, leaning towards him, and bringing him close until there was no longer any distance between their bodies.

Gale tipped his chin, forcing Havoc to look at him squarely. “You told me before you were going to be my reason for living. Then live with me. Walk the present with me.”

“It’s not as easy or simple as that,” Havoc said weakly, beginning to draw away but Gale stayed put.

“Of course,” Havoc answered hotly. “Have you forgotten who the fuck you’re talking to, Gale?”

“No. You’re the only one here who’s forgotten. The man I’m looking at right now is the same fucking man I fell in love with. So are you going to leave me hanging or are you going to make me yours?”

Gale didn’t give Havoc time to answer. He wrapped his arms firmly around Havoc’s neck and finally kissed him deep. This time, Havoc didn’t fight him. Teeth and tongues fought for dominance. Gale eventually let Havoc’s prodding tongue in. He always enjoyed the sensation of Havoc taking the reins, of leading the dance. Havoc pushed him down until he was lying flat on his back on the coach.

A thrill of excitement shot down Gale’s spin as Havoc secured both his wrists above his head in a vise-like grip, while he devoured his mouth. Gale could feel Havoc’s prick pressing against his belly, and he wanted nothing but to free it from its sheath. Once Havoc drew away from his mouth, Gale managed to speak. “Clothes off first.”

Havoc grinned down at him, and helped undress both of them before resuming. The solid press of Havoc’s flesh against Gale was amazing, and so was his thickening cock. Havoc wasn’t a gentle lover, which was fine with Gale. His touches were rough, demanding, and each bite he left as he made his way down Gale’s body felt like a searing lick of fire.

Havoc took Gale’s left nipple, sucking hard and biting down on it, making Gale cry out. He left an imprint of his teeth on both of them, and the sight of the mark made Gale giddy with exhilaration. Havoc was marking his territory, telling the world Gale was exclusively his, and Gale wouldn’t let any other man but Havoc claim him.

The experience was intense. Havoc kept his gaze trained on him while he sucked in every inch, not stopping or pausing.

Once he reached the base, Havoc drew out. “Does it feel good?”

“Fuck, yeah.” Gale whimpered when Havoc smoothly went down on him again.

I cannot get enough of Havoc’s Crew series by author Angelique Voisen. It just keeps getting better and better as it goes along. Wrecking Havoc is one I really wanted to read. Havoc is the leader of Havoc’s crew. They all have special wizard powers but Havoc is the father figure to them all. He is the most powerful. He can manipulate all four elements of nature. He was and still is at times the Council’s hit man of sorts. He takes all out the threats sometimes permanently. This time though he is being set up, and it will take all of his boys to save him. Gale he controls the wind. He has had a hard life. He is tough, strong and a fighter. He is in love with Havoc. He wants Havoc to love him back but something his holding Havoc back from really loving Gale. But is Gale strong enough to figure out what before it is too late. So much happens in this book. I really felt it should have been longer, only because of so much story rushed into such a short book. However tip to reading this series, read them in order. Each story builds on the next. This was a great addition to the already amazing series and I am very glad I got the chance to read it. It is not the best book to me from the series but it is well worth the time to read. Four Twinkling Stars