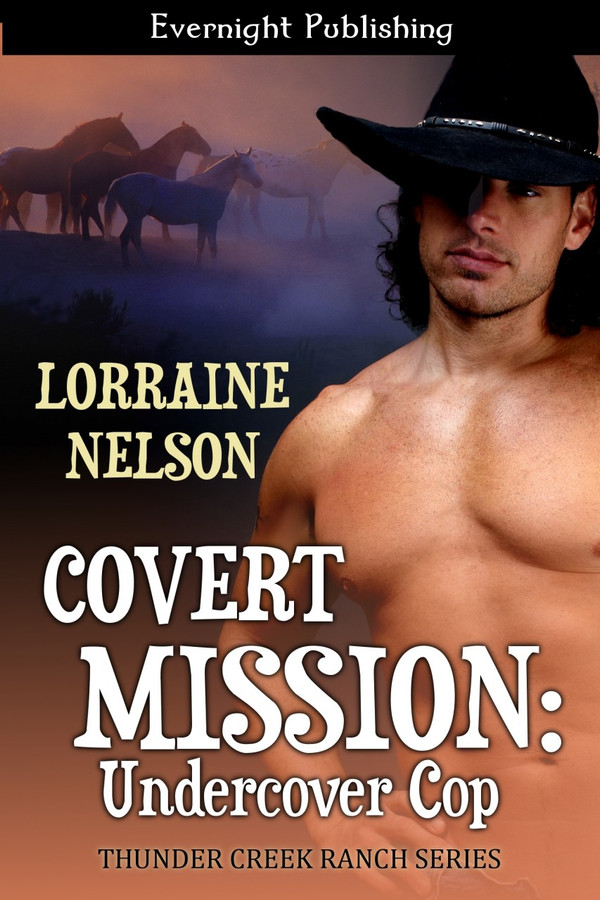 Two cops have been murdered, two convicts escape. Samantha Muldoon and Blake Northrup pair up to protect their friends.

Will their attraction to each other hinder their effectiveness or distract them from their job? Can it grow into something lasting, or will previous hurt keep them apart?

“Enjoying the party?” he asked.  “Yes. There’s certainly a good turn-out.”    The band struck up a waltz to slow things down and he rose to his feet, holding out a hand. She knew that being held in his arms was dangerous, but without a doubt, it would be delightful, too. She took his hand and allowed him to lead her to the makeshift dance floor.    Dancing with Blake had every one of her hormones on full alert. His moves were sure and masterful, leading her around with no trouble to follow his steps. She felt as if she glided on air, her feet barely touching the floor.    When the next song proved even slower, he held her so close she could feel every beat of his heart as it thundered in her ear. Blake was a good head taller than she was, her cheek coming to rest against his chest as they danced. All her life she’d hated being short, until she’d found the perfect fit in Blake’s arms. With him, she felt petite and cherished.     She became aware of his hardened length pressed against her belly and her nipples beaded in response. It had been such a long, long time since she’d been intimate with a man. Fear of seeing the disgust, or worse, pity, in their eyes when they looked upon her naked body for the first time, had kept her celibate since her accident. In truth, until meeting Blake, her desire had lain dormant, like a closed door to her very soul.     Now, she was all woman, with a woman’s wants and needs the like of which she’d never experienced. Her awakening due to the man holding her gently yet firmly against his heart, maybe it was time to start living again—to feel the flush of heated skin against skin as they succumbed to their attraction for each other. He was interested. She knew that. Had known since that first day on the ranch when they’d all arrived to help Luke protect his wife, Zakia, from a crazed stalker.    “Sam?” His husky baritone sounded in her ear.    “Yes?”    “The… uh… dance is over.” He chuckled. “Intermission. As much as I enjoy holding you, maybe we could sit for a spell?”            “Oh! Okay.” She’d been so lost in thought, she hadn’t been aware of anything except Blake’s body against hers. “Want me to walk in front?” she teased.    He grinned. “Please do. Being this close to you has an obvious effect on my libido.”    “Yeah, I noticed,” she said, allowing her hand to trail down over the ridge in his jeans as she turned to start walking back to their table.    “Tease!”

Other Books in the THUNDER CREEK RANCH series:

Zakia and the Cowboy

Samantha aka Sam to all her friends loses her arm while in the service wants to prove to everyone that she is independent and self-sufficient, mainly to the men. She even owns her own dry cleaning business! But what most people don&#039;t know is that Sam lost more than her arm while in the service and now does not feel like a &quot;whole&quot; woman. She meets Blake through her good friend Zakia and they automatically have chemistry, but Sam is not looking for any kind of commitment or the complications associated with &quot;relationships&quot;. Blake is every woman’s dream-tall, dark, and handsome cowboy but she tells him from the get go she only wants to be friends. When Blake first sees Sam getting out of her Chevy Tracker he knew that she was the woman for him, he does not see her as anything but a beautiful woman and discovers right away that she is as prickly and independent as they come. Sam keeps telling him over and over again that she does not do relationships, but he wants more than &quot;just friends&quot; and he&#039;s willing to wait and bide his time for her to come around and see that he doesn&#039;t see her prosthesis, just as a sexy woman. When Zakia&#039;s stalker escapes and comes after Samantha, she comes to understand that Blake is there for her and what he is willing to sacrifice to keep her safe and yes, protect and help her. Can Sam overcome the feeling she has of being less than a whole woman and when she tells Blake everything that she lost in the army will he still want her and think that she is the woman for him and give him everything he wants and deserves. Lorraine Nelson&#039;s writing takes you along with her and the love her the characters at Thunder Creek. You have moments to where you want to either shake Sam or hug her for everything that she has gone through. She makes you dream about your own Blake, and that not others always see us the way we see ourselves.

Sam was force to leave the Army after she lost her arm in combat. When the criminal who tried to kill her best friend, Zakia, escapes, she leaves her laundry business to help. There she gets to see her good friend and hidden desire, Blake. As the two work to protect their friends, they also realize how much they want each other. Blake is an undercover cop trying to protect his friends and catch the bad guys, all the while wanting to explain to Sam his desire for her. As the danger they face gets closer, he must focus on the big picture or lose everything. As the chase for the bad guys intensifies, Sam and Blake turn to each other with love, but know they must finish their mission. They also must admit their fears if they have a chance for a future together. This is a great story that had me from the beginning. I really enjoyed the thought of a female military amputee and thought it was handled very well. Sam’s recovery was how the author pulled all facets of the story together. The dialogue was good, but the descriptions were better. Watching the couple move from friendship to lovers was wonderful, and I loved it almost as much as Sam’s growth. The sex was great and very hot, and the transition to the thrilling action scenes was enough to make me recommend the book alone. Covert Mission: Undercover Cop is a great modern western romance.

Monica&#039;s Review This is a passionate story where two characters come together shortly after tragedy happens at Thunder Creek Ranch. They have been friends going out on outings but never out formally. A passionate weekend is all that Sam can give but Blake is not ready to let go. Only that Sam is holding a secret that can either break their somewhat relationship or maybe get married. Sam is a strong independent woman that has been holding her own since she was discharged from the military on medical leave. She was caught in an explosion that left her without an arm. Coming to realize that she maybe falling in love with Blake she decides to have a passionate weekend then walk away. Only that the stalker of her best friend escapes on the day he had court she realizes that she will be spending more time with Blake. Blake knows what he wants and will do anything to have Sam. He tries to stay away from her but he misses her too much. So when she agrees to spend the weekend with him at his ranch home he is in heaven. Only his happiness is short lived because Sam is in an accident and can not remember anything. He helps her to recover but at the same time he has a job to do and people to protect. He needs to remember that not only does he need to protect his friends but he can also be in danger. Covert Mission: Undercover Cop takes place in Thunder Creek Ranch where his bestfriend Luke and his wife Zakia live. The stalker that Zakia had in book one is back to finish the job that he failed to do. This time her best friend will be with her every step of the way but an accident left her with amnesia. Little by little she regains her memory but somehow during her time without memory she is still attracted to Blake. Only Blake was a gentleman and did not cross the line with her no matter what Sam did. When she regains her memory will she allow herself to be happy no matter what? I liked that the characters in Zakia and her Cowboy were integrated into this book. I was able to see how their relationship has flourished. I was so happy for Blake when it looked like he was going to have his dream come true but all was shattered when his life was hangs by a thread. I also sympathized with Sam because she went through a lot when she was in the military with her accident and the heartache of losing people she loved. There were a couple of editing errors which confused me but not enough to keep me from finishing the story. The only problem that I had with this story was that I wanted to read how the stalker was caught and who was behind in helping him escape when he was being transported to the court. But believe me it was worth the read. If you have not read book one of this series, Zakia and her Cowboy, I highly recommend it so you can see how it all started with the mission of finding the fugitive. Will Blake accept the secret that Sam has been keeping from him and somehow form a family in the future. Well buy this book and find out how they got their happily ever after.

Once Ray (The bad guy) escapes prison and Sam gets into an accident which leaves her with no memory things get interesting. Here is where the pace picks up and the story gets really good. The ending was a little too convenient and the twists weren’t really big surprises. Still there were hot cowboys and great characters. That’s one thing that Ms. Nelson really nailed, the characters. Sam was wonderfully witty and Blake a sweetheart. The sex was really well done too. Overall, the pace and plot needed work. So, the big question, would I recommend this? Yes. It’s still a very sweet read and the characters are wonderfully written.

Lorraine Nelson is one of the very best of the new romance authors, as evidenced by her second book in the Thunder Creek Ranch Series, Covert Mission: Undercover Cop. Heroine Sam Muldoon and hero Blake Northrup, first introduced in Zakia and the Cowboy, continue the series’ trademark winning combination of memorable characters, rich dialogue, intense emotions and a heat level that’s like molten honey—all while set in the breathtaking beauty of the Canadian Rockies. When a new and unexpected danger threatens Sam’s best friend, Zakia, the spunky, sassy and strong heroine returns to Thunder Creek Ranch to assist. Now she not only must guard her heart from being broken and keep Blake from discovering the secret not even Zakia knows, she is the victim of a criminal assault that leaves far-reaching consequences. Whether this is your first time meeting the heroes and heroines of Thunder Creek or an anticipated return visit, Nelson makes readers feel right at home and more than ready for her next title.