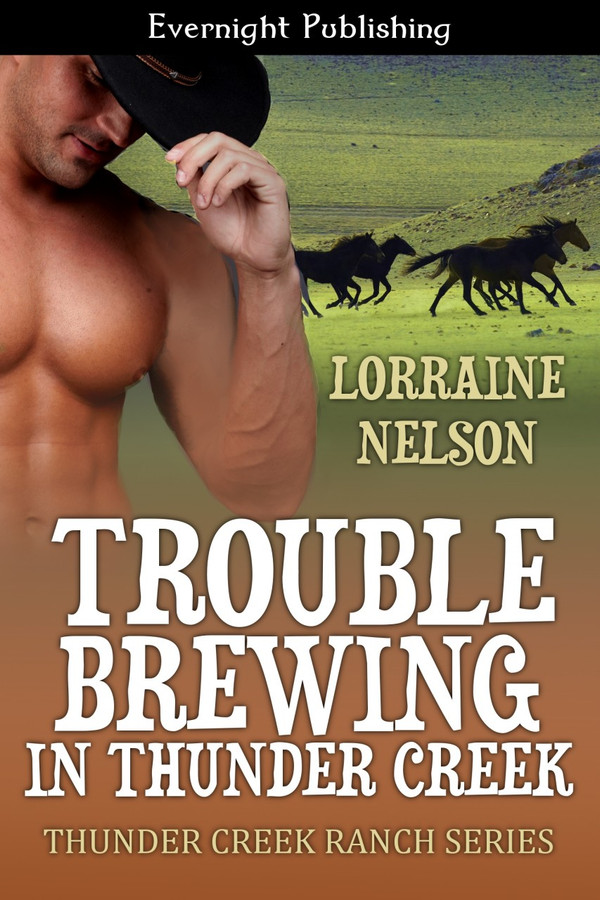 Trouble comes to Thunder Creek the moment authorities arrest Winnie's son for stalking and terrorizing Lucas' daughter-in-law. Winnie feels guilty and withdraws from the Manning family. But a threatening phone call disturbs their lives even more as Winnie becomes an unexpected target.

Can Lucas convince Winnie of her worthiness and save their marriage? Or will danger and loyalty to her son further drive a wedge between them?

The warm water sluiced over their hot bodies in a rushing stream as they stood entwined in the tiny stall. Her kisses tasted like chocolate mint from the candy bars they’d snacked on earlier.

She poured a liberal amount of his shower gel into her palm. “Turn around.”

He did as requested, and she dutifully soaped his back. As her hands moved to soap his chest, she rubbed her breasts against him, and he shivered in response to the sensations rioting through his body. When her hands reached to soap his cock, he gasped, taking in a mouthful of water, which he promptly spewed out.

“Lady, you sure are full of surprises,” he said as he turned to face her, rinsing off under the spray before turning the taps off. He grabbed a towel and dried her body, his ministrations causing exquisite little moans to escape her lips. Quickly drying himself, he tossed the towel aside and wrapped an arm around her waist.

Side-by-side, they walked through to the bedroom where he could make love to her in comfort. He loved this woman. He’d shown her every day in every way he could, but the words themselves didn’t come easy, not since his first wife died and took a piece of his heart with her.

As they lay down, he cuddled close and worshipped her body with his hands and mouth, old memories pushed to the farthest recesses of his mind.

Her breasts spilled from his hands as he massaged their silky softness. “So damned soft. I could play with them all night long.”

She clutched his head urging him forward to taste her rosy buds. “Be my guest.”

He laved a tongue over a nipple, teasing before pulling it into his mouth, his hand pinching the other one. Her soft murmur of delight spurred him on. He let go of her breast, with a light bite, trailing kisses down over her abdomen to reach the honeyed prize nested in reddish curls. Her legs spread for him, the most feminine part of her open and waiting for his attention.

Other Books in the THUNDER CREEK RANCH series:

Zakia and the Cowboy

After experiencing the terror of Zakia&#039;s stalker kidnapping her, we find ourselves drawn into more of the drama. Just when we think everything will be alright for this family, the unbelievable happens. Winnie&#039;s son Roy is arrested for the kidnapping and attempted murder of Zakia. Can you imagine finding out your son or daughter were the one casuing the trouble for everyone? The thought of having to choose who to side with.... your child or your family would be enough to drive anyone crazy. No one should ever have to make that choice. But Winnie is as strong as they come. She hides her shame from the family, though she feels like a traitor. She believes in her son and wants what is best for everyone involved. Even if it means losing her husband and new family. When Lucas becomes ill, the family circles the wagons. Lucas helps Winnie find strength in herself and in her place in the family.Reminding her, Roy is an adult and his faults are his own. Deep down, she knows the truth. But admitting it is an entirely different matter. Trouble Brewing in Thunder Creek gives us a better view of this family we met in Zakia and the Cowboy. We learn more about the unique dynamic of their relationships and what drives them to be who and what they are. Every page takes us deeper into their hearts and minds without cluttering anything up with fluff. This is the REAL deal! The Manning family is one of the most believable families I have ever read about. They&#039;re honest, hard-working, loyal and they love each other with every fiber of their being. Exactly how I have always imagined ranch families to be. High praise once again for Lorraine Nelson and a huge thanks for letting us into the lives of the Manning family! Lorraine&#039;s books are everything a great Romance should be! Her plots always flow easily without hiccups along the way. There are no sagging middles here. She really knows what follow through means and she delivers! If you like your heroines as believable as the heroes are HOT...this series is for you! Can you think of a better way to spend some time in the Canadian Mountains? While this series does revolve around the Mannings, her books do not need to be read in order of publication. The only thing readers will get lost in are the stories of these hot ranchers and their strong, beautiful wives.

In this second installment of the Thunder Creek series we learn more about the older Mannings, Lucas and Winnie. It is a more in depth story of how they met and their life together. This continues from Zakia and The Cowboy immediately following Zakia&#039;s kidnapping and the imminent arrest of Leroy Williams. Leroy is actually Winnie&#039;s son. A scoundrel to the highest degree, he is charged with kidnapping and currently sits in jail awaiting trial. Claiming he is innocent, Winnie believes him. A mother&#039;s love will transcend even the most damning evidence. Who could blame her? The love she has for her son starts to put a strain on her relationship with her husband, Lucas. Though they love each other deeply, we see the turmoil they both feel and it is heart wrenching. They are both torn between protecting their children and maintaining their marriage at the same time. To say it is a difficult situation is putting it mildly. The stress eventually takes its toll, but this family will not give up. The love they share is infinite and enables them to get through anything together. Being the second book in this series, I am glad I had the opportunity to read the first one. Though it isn&#039;t necessary to read them in order, it does help. Either way, once you arrive in Thunder Creek you won&#039;t want to leave. This family is full of hard working, hard loving, no nonsense people. Their world revolves around family and they will do anything to protect each other. Lorraine Nelson has given us a real ranch family. She shows their humor, heart and determination in every aspect. She even manages to make you feel a bit of compassion for Leroy, and he is truly no good. Lorraine captures the true essence of a mother&#039;s love and shows us there are no boundaries to it. We have Zakia protecting her children and Winnie protecting her son, yet these women never clash. Winnie is filled with insecurity of her place in this family because of her son&#039;s crimes, but the family emphasizes she will always be accepted. It wasn&#039;t her fault, it was Leroy&#039;s. It is a wonderfully well written book from all points of view. Come on in, put your feet up and rest a spell. Winnie loves visitors and there&#039;s always room for one more. The next book in this series is Covert Mission and I cannot wait to read it!!

Winny is...very domestic, yes, that’s the word I’d use. She’s sweet and I did like her character. Her son, Roy, stalked and tried to kill Luke’s family. Lucas is a forty something year old ranch owner who is in love with Winny. He rather reminds me of Harrison Ford. (Who I would take home at any age! *wink* Email me Harrison, lol.) So, why not 5 shiny stars? There was a lot to be fixed about Trouble Brewing in Thunder Creek. First is the scenes. Some were rushed, others slow and then there are several scenes that were so boring I was tempted to skip over them. Ms. Nelson wrote a lot of domestic scenes, cooking and spending time with the boys. It should have been trimmed so it wouldn’t hinder the flow so drastically. Parts of the book were more outlines; there was no fleshing out and little details. I can’t help but wonder why this book took such a downward turn when the first two in the series were fantastic! The action was tame. There wasn’t suspense or edge of your seat scenes like the first two. This needed another intense look by an editor; I think that would have solved half the problems. Trouble Brewing in Thunder Creek was a good read but certainly not a favorite. If you liked the first two in this series you’ll enjoy this one.